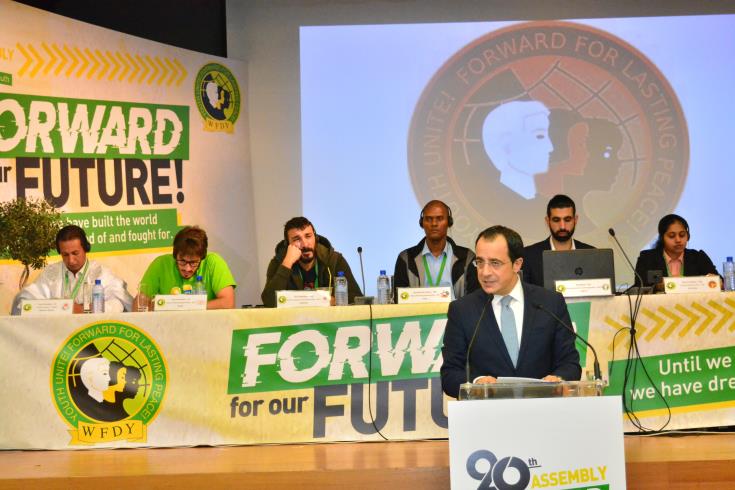 Cyprus continues striving for a functional and viable compromise that would meet the desires and expectations of the island’s citizens, Greek Cypriots and Turkish Cypriots alike, Minister of Foreign Affairs Nicos Christodoulides has said, adding that the current unacceptable state of affairs cannot constitute the solution of the Cyprus problem.

Addressing the opening ceremony of the 20th annual meeting of the World Federation of Democratic Youth on Tuesday, Christodoulides said that Cyprus, a victim of war, of foreign interventions, invasion and a 45-year occupation of a sizeable part of its territory continues to strive for the restoration of the international law and liberation and reunification through a viable solution to the Cyprus problem on the agreed framework of a bicommunal bizonal federation with political equality, as defined in the UN resolutions with one sovereignty and one international personality.

“For a functional and viable compromise that would live up to the desires and expectations of the island’s citizens, Greek Cypriots and Turkish Cypriots… without foreign guardians and guarantors and without the presence of foreign troops,” Christodoulides added. A compromise which would free Cyprus from occupation, ending settlement, reunite the state, the people, the institutions and the economy, and consolidate human rights and basic freedoms of all Cypriots.”

Noting that the government’s efforts for the resumption of negotiations under the UN Secretary-General’s good offices mission are taking place in this context, the Cypriot FM said that “we remain unwaveringly focused on this target until reaching a positive result.”

“The present unacceptable state of affairs cannot constitute the settlement of the Cyprus problem,” Christodoulides stressed.