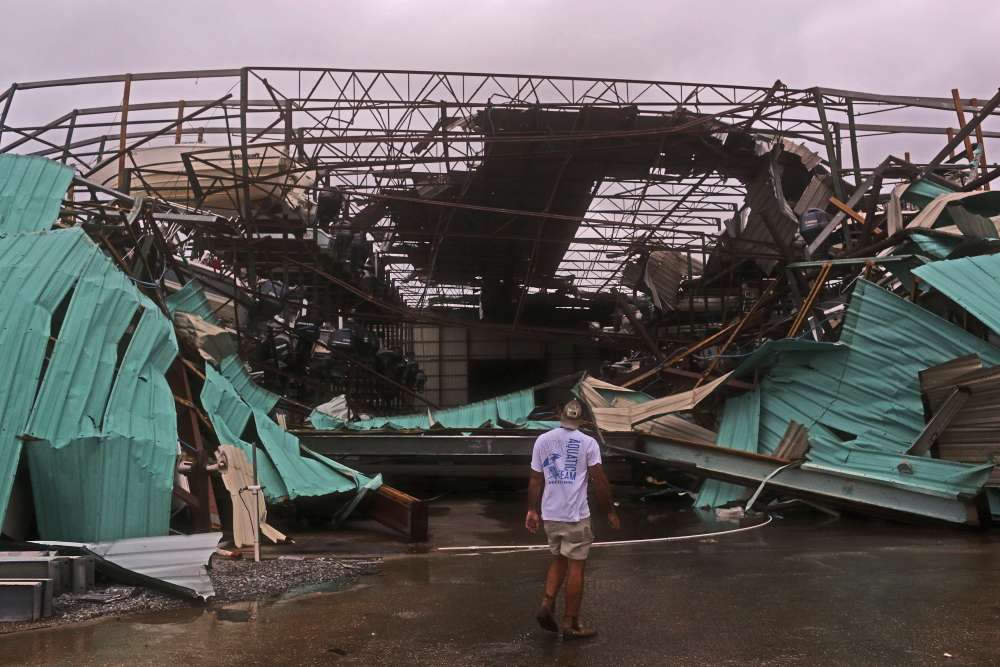 Hurricane Michael, the fiercest storm to hit Florida in more than 80 years and the third-most powerful ever to strike the U.S. mainland, battered the state’s Gulf coast on Wednesday with roof-shredding winds, raging surf and torrential rains.

Michael, whose rapid intensification as it churned north over the Gulf of Mexico caught many by surprise, made landfall early in the afternoon near Mexico Beach, about 32 km southeast of Panama City in Florida’s Panhandle region, with top sustained winds reaching 249 kph.

The storm came ashore as a Category 4 hurricane on the five-step Saffir-Simpson wind scale, the biggest storm on record to strike by Florida Panhandle. Its sustained winds were just 3.2 kph shy of an extremely rare Category 5.

The storm’s intensity waned steadily as it pushed inland and curled northeasterly into Georgia after dark. It was downgraded to a Category 1 storm, with top sustained winds diminishing to 120 kph, about nine hours after it made landfall.

The governors of North and South Carolina urged residents to brace for more heavy rain and storm-force winds as Michael plows northward up the Atlantic seaboard. The Carolinas are still reeling from severe flooding in the aftermath of Hurricane Florence less than a month ago.

The National Hurricane Center said Michael would pass through the Carolinas as a tropical storm on Thursday, dumping as much as 8 inches of rain in some areas. Up to a foot (30 cm) of rain was forecast in Florida.

Gadsden County sheriff’s spokeswoman Anglie Hightower said a “male subject” was killed by a tree toppling onto his house in Greensboro, Florida, in the first fatality related to the hurricane.

A video posted on Twitter showed winds ripping apart a house on Mexico Beach, its debris washing up to adjacent properties. Governor Rick Scott said there was a “lot of roof damage” in the storm’s path.

Bill Manning, a 63-year-old grocery clerk, fled his camper van in Panama City for safer quarters in a hotel only to see the electricity there go out.

Without power, the city was plunged into darkness at nightfall and its flooded streets were mostly silent and devoid of people or traffic.

By Wednesday night, more than 403,000 homes and businesses were without electricity in Florida, Georgia and Alabama, utility companies said.

Television news footage earlier in the day showed floodwaters up to the roofs of many homes in Mexico Beach. The fate of about 280 residents who authorities said defied evacuation orders was unknown.

Twenty miles to the south, floodwaters were more than 7-1/2 feet (2.3 meters) deep near Apalachicola, a town of about 2,300 residents, hurricane center chief Ken Graham said. Wind damage was also evident.

“There are so many downed power lines and trees that it’s almost impossible to get through the city,” Apalachicola Mayor Van Johnson said.

The Federal Emergency Management Agency (FEMA) said on Tuesday an estimated 500,000 Florida residents had been ordered or urged to seek higher ground before the storm in 20 counties spanning a 320-km stretch of shoreline.

But Brad Kieserman of the American Red Cross said on Wednesday as many as 320,000 people on Florida’s Gulf Coast had disregarded evacuation notices.

An estimated 6,000 evacuees took cover in emergency shelters, most of them in Florida, and that number was expected to swell to 20,000 across five states by week’s end, Kieserman said.

Bo Patterson, the mayor of Port St. Joe, just south of Mexico Beach, rode out the storm in his house seven blocks from the beach.

“It feels like you don’t know when the next tree is going to fall on top of you because its blowing so ferociously,” he said by telephone. “It’s very, very scary. We have trees being uprooted, heavy, heavy rain.”

Patterson was one of about 2,500 of the town’s 3,500 residents who ended up staying put, many of them caught off guard by the storm’s rapid escalation as it approached. “This happened so quickly,” he said.

FEMA head Brock Long acknowledged that early evacuation efforts in the area were slow in comparison to how quickly the hurricane intensified. Michael grew from a tropical storm into a Category 4 hurricane over the course of about 40 hours.

“Satellite images of Michael’s evolution on Tuesday night were, in a word, jaw-dropping,” wrote Bob Henson, a meteorologist with weather site Weather Underground.

With a low barometric pressure recorded at 919 millibars, the measure of a hurricane’s force, Michael ranked as the third-strongest storm on record to make landfall in the continental United States. Only Hurricane Camille on the Mississippi Gulf Coast in 1969 and the so-called Labor Day hurricane of 1935 in the Florida Keys were more intense.

President Donald Trump declared a state of emergency for all of Florida, freeing up federal assistance to supplement state and local disaster responses.

About 3,500 Florida National Guard troops were deployed to assist with evacuations and storm recovery, along with more than 1,000 search-and-rescue personnel, Scott said.

The Pentagon said it had pre-positioned more than 2,200 active-duty military personnel, along with helicopters, high-water vehicles and swift-water boats for deployment as needed.

Even before landfall, the hurricane disrupted energy operations in the Gulf, cutting crude oil production by more than 40 percent and natural gas output by nearly a third as offshore platforms were evacuated ahead of the storm’s arrival.

By In Cyprus
Previous articleU.S. raises pressure on Saudi Arabia over missing journalist
Next articleMore rain as unstable weather continues