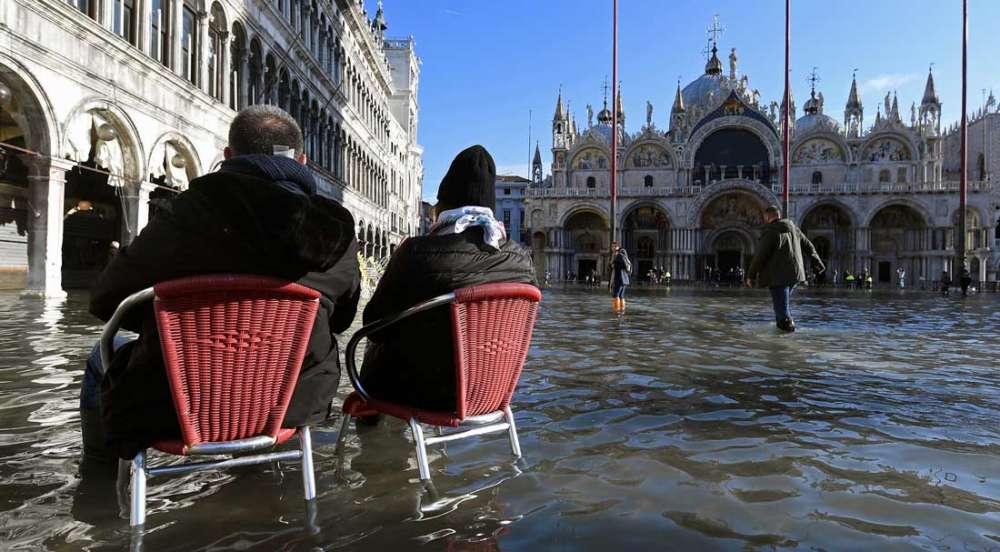 Extreme floods in Venice, fires in Australia and even an outbreak of plague in China have been attributed to climate change this week, while researchers have warned that global warming could saddle future generations with life-long illness.

Venice declared a state of emergency on Wednesday after “apocalyptic” floods swept through the lagoon city, flooding its historic basilica and inundating squares and centuries-old buildings.

“This is the result of climate change,” city mayor Luigi Brugnaro said on Twitter.

City thoroughfares were turned into raging torrents, stone balustrades were shattered, boats tossed ashore and gondolas smashed against their moorings as the lagoon tide peaked at 187 cm (6ft 2ins). It was the highest since the record 194 cm set in 1966, but rising water levels are becoming a regular threat to the tourist jewel.

“Venice is on its knees,” said Brugnaro. “The damage will run into hundreds of millions of euros.”

On the other side of the world, parts of Australia have been ravaged by wild bushfires this week, with four people killed and communities forced to flee the flames.

Since 2016, parts of northern and inland New South Wales, along with southern Queensland, have been in drought that the Bureau of Meteorology says is being driven, in part, by warmer sea-surface temperatures affecting rainfall patterns.

Air temperatures have also warmed over the past century, increasing the ferocity of droughts and fires.

But links between climate change and extreme weather events have become a political football in Australia.

The coal-industry supporting government accepts the need to cut emissions while arguing that stronger environmental action would cripple its economy.

That pits the country against its Pacific island neighbours which are particularly susceptible to warmer temperatures and rising seas.

Trump and Brazilian President Jair Bolsonaro are among the world’s only leaders who publicly question the science of climate change, despite devastating fires in their countries – in California and the Amazon basin – that environmentalists at least partly blame on global warming.

While the politicians argue, concern is growing about the impact on the health of a warmer world.

In China, health officials have reported a rare outbreak of pneumonic plague after two cases were confirmed this week in Beijing.

The two were infected in the province of Inner Mongolia, where rodent populations have expanded dramatically after persistent droughts, worsened by climate change, state media said.

An area the size of the Netherlands was hit by a “rat plague” last summer.

The wider implications for health are sobering.

If nothing is done, the impacts could burden an entire generation with disease and illness throughout their lives, researchers said.

“Children are particularly vulnerable to the health risks of a changing climate. Their bodies and immune systems are still developing, leaving them more susceptible to disease and environmental pollutants,” said Nick Watts, one of those who led the Lancet Countdown on Health and Climate Change study.

“Without immediate action from all countries to cut greenhouse gas emissions, gains in wellbeing and life expectancy will be compromised, and climate change will come to define the health of an entire generation,” he told a London briefing.