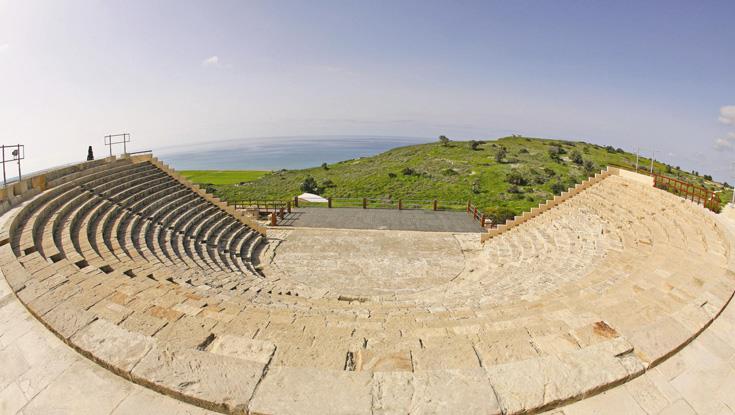 This year’s programme is composed of international and national theatre productions with the festival co-organised by the Cultural Services of the Ministry of Education and Culture, the Cyprus Centre of the International Theatre Institute and the Deputy Ministry of Tourism.

Christos Georgiou, the festival’s General Coordinator presented today the productions that have been selected for this year’s edition, “emphasizing on the quality and collaboration with major theatre institutions, and encouraging for yet another year local creation, a diverse and expansive programme is offered to the spectators.”

The official opening of this year`s edition will take place at Paphos Ancient Odeon on the 28th of June 2019 with the first Slovenian production of Euripides’ tragedy Trojan Women, produced by the Slovene National Theatre Nova Gorica and directed by Jaša Koceli, while a performance of the production will follow on June 30th at “Skali” Amphitheatre.

The Festival’s programme continues with the Spanish production Hippolytus by Euripides directed by Emilio del Valle, a co-production of Maltravieso Teatro, La Almena Producciones and the Mérida International Classical Theatre Festival, which will be presented at Paphos Ancient Odeon on July 8th and at “Skali” Amphitheatre on July 10th. Hippolytus, which was presented last summer at the 64th Mérida Festival and received great praise, attempts to recompose the first tragedy written by Euripides, Hippolytus Veiled based on the surviving Hippolytus Garland- Bearer.

The National Institute of Ancient Drama (Fondazione INDA) of the Syracuse Greek Theatre Festival in Italy, returns after 5 years to the Festival presenting Aristophanes’ comedy Lysistrata directed by Tullio Solenghi, for two performances at Curium Ancient Theatre on July 12th and 13th. The distinguished and renowned actor Tullio Solenghi directs Lysistrata, with Elisabetta Pozzi in the leading role in a production of superb cast and collaborators.

The internationally award-winning Izumi Ashizawa collaborates with Cypriot theatre company Belacqua Theatre and directs Euripides’ Bacchae, the Cypriot production of this year’s Festival which will be presented at “Skali” Amphitheatre on July 18th, at Curium Ancient Theatre on July 20th and at Paphos Ancient Odeon on July 22nd. The intercultural production combining the techniques of Japanese Noh theatre and ancient Greek drama, aims to create a new performance language.

The production of the National Theatre of Northern Greece (NTNG), Iphigenia in Aulis by Euripides, directed by Yannis Kalavrianos marks the closing of this year’s Festival programme, with performances at Curium Ancient Theatre on July 26th and 27th. In a new translation by Pantelis Boukalas and with Anthi Efstratiadou, the 2016 recipient of the “Melina Mercouri Theatre Award” in the role of Iphigenia, Iphigenia in Aulis is this year’s NTNG production, participating also at the Athens & Epidaurus Festival.

According to a press release, for another year, the aim of the organisers, is the continuation of the rising and successful course that the “International Festival of Ancient Greek Drama” already has on its record, the artistic quality assurance of the performances’ programme, the substantial contribution to the international and local cultural landscape and an approach towards all audience genres.

Furthermore, the organisers said that the festival will feature reduced ticket price for the group of students, senior citizens, national guard, unemployed to six euro.