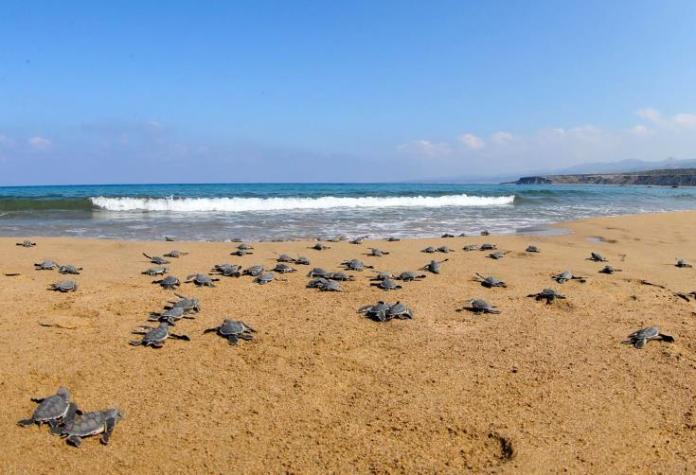 The Fisheries and Marine Research Department said on Thursday that there will be zero tolerance for violations of the law aimed at protecting the Lara-Toxeftra turtle nesting beaches.

In a written announcement, the second reiterating that turtles must be protected within the same day, the department said it was surprised by the statements of an MP objecting to protective measures in force at Lara-Toxeftra under a law approved in 1989.

Lara  is world known as a turtle nesting beach for the green and loggerhead turtles. Cyprus is the only EU country where the much rarer green turtle nests, it added.

The Lara-Toxeftra area was declared a protected area in 1989, is part of the EU’s Natura 2000 network and in 2013 was included on the list of special protected areas under the Barcelona Convention.

“The past few years has seen intense illegal activity on Lara Beach. The department has taken all the necessary measures and monitors the area on a daily bases and also informs visitors about the law,” it said.

Anyone found to be breaking the law for example by placing umbrellas are informed that this is not allowed and should they not comply, there are fined.

“It is worth noting that in the majority of the cases there is compliance by the public which also says it is happy that protective measures are being implemented,” the department said.

The public is urged to adhere to the law and to behave environmentally to protect the sea turtles whose presence is a reflection of the good ecological state of the marine environment.

It is reminded that from June 1 to September 30, the placing of umbrellas, sun beds, tents and caravans on the Lara-Toxeftra beaches is prohibited while no one is allowed to stay on the beach overnight (from one hour after sunset) nor is driving on the beach permitted.

Also prohibited is the use and anchoring of pleasure boats in the area, any kind of fishing except with a rod, collecting crabs from the beach (they are protected throughout Cyprus), littering and the lighting of fires.

“During the day, people can visit the protected, swim and observe the baby turtles heading to sea if they have just hatched,” it concluded.

By In Cyprus
Previous articleKadis tells district officer to act after tractor filmed near turtle beach
Next articleMinistry: Evicted Pissouri homeowners should apply to district officer for aid