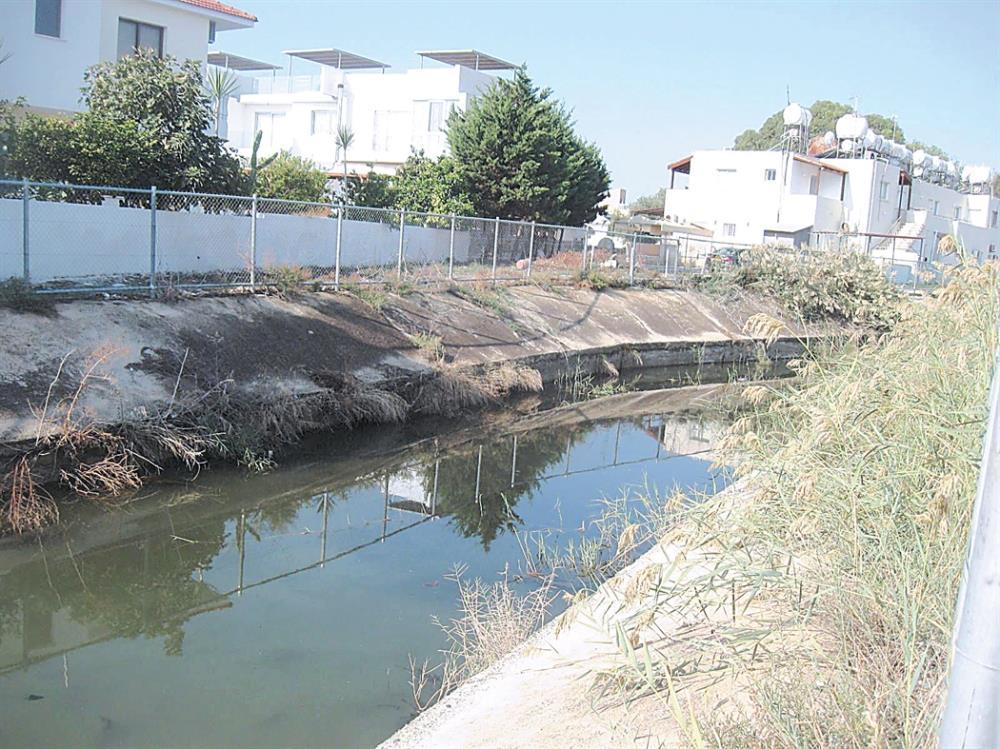 During bad weather, Livadia’s anti-flooding canal diverts water from the sea into the canal instead of from the river into the sea, and during the summer, the canal is transformed into an extensive swamp in which insects hatch and rodents thrive.

Due to the swamp, reeds and other wild vegetation sprouts. The canal is located in the gas plant area on the Larnaca – Dhekelia coastal front, and although it is situated on land that belongs to Livadia, it borders with Oroklini and it is located near the Oroklini Lake. It is one of Livadia River’s canals, for which the local municipality has, for years, been asking the Ministry of Interior and the Larnaca District Administration for it to be fenced. Additionally, it wants the section where water flows in from the sea because it’s lower than sea level to be reconstructed However, these verbal and written requests have not been addressed.

According to residents’ complaints, during the past few days, and following the current bad weather conditions, schools of fish have crossed from the sea into the canal and are swimming among rubbish, wood, and waste that was brought into the canal with the rain water.

However, locals say that the problem doesn’t just begin from the fact that the reconstruction of the Livadia River canals has stalled, but also because the Larnaca District Administration has turned a blind eye, creating this unacceptable situation. In particular, according to their complaints, at the entrance of the canal, next to the gas plant, at sea level, the waves have created a sand barrier, blocking the water flow even further.

Reeds and other shrubs that have started to grow in the bed of the canal and below the Larnaca – Dhekelia road bridge, further exacerbate the water flow problem. As a result, for about one kilometre, there is a pond of water at the bowl of the canal, reminiscent of a swamp.

Beyond the embankment, which was unsuccessfully created to prevent water from flowing into the problematic section of the canal, there is another problem. As described by residents, in and around Livadia’s residential area, bushes and other shrubs have sprouted in the bed of the canal and as a result water escapes and ends up in the cultivated fields of farmers, located on the right and left side of the canal as well as in courtyards and streets, often threatening properties.

Dozens of reports have been written about this matter in recent years. Locals have been complaining about the State’s indifference with regards to the rebuilding of the canal, as well at the overall canals of the Livadia River for more than ten years.