First Social Welfare Deputy Minister sworn in, pledges to work hard for a strong state of welfare for everyone 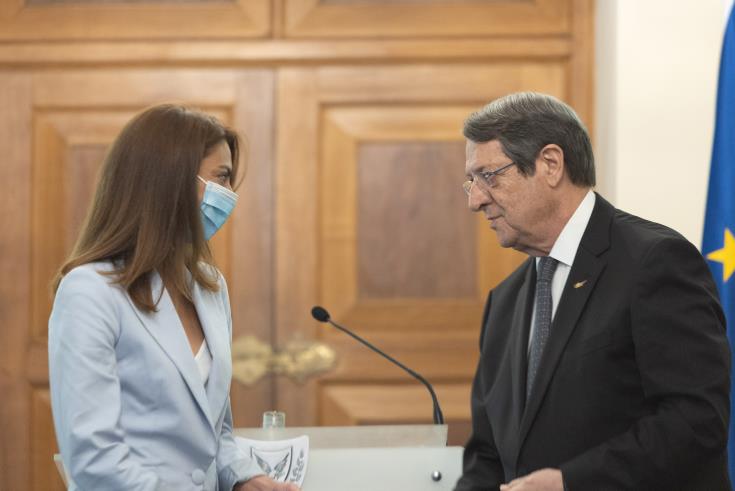 Cyprus’ First Deputy Minister of Social Welfare Anastasia Anthousi was sworn in on Friday, pledging to work hard so every citizen to live in dignity in a strong state of real welfare and to promote the government’s policies and strategies for the reforms needed.

Speaking during the sworn in ceremony at the Presidential Palace, President Nicos Anastasiades said that today`s ceremony and assumption of duties by the new Deputy Minister is another important milestone in the ambitious reform effort to upgrade the structures and operation of the state’s social services.

He referred in detail to the responsibilities of the new Deputy Minister, among others, the implementation of the Social Welfare Services Restructuring Plan, which was drawn up after a diverse social dialogue and the participation of the civil society and state officials.

He said that to this end more than 150 employees were hired at all levels of social services. The President also referred to the  development of an appropriate institutional framework for ensuring conditions of social solidarity, providing social protection and combating social exclusion, promoting equal opportunities for all citizens as well as the implementation of the national strategy to ensure a decent standard of living for all those who live legally in the Republic.

The President also referred to the strategies which include the supervision of the proper functioning of both the “Children`s Home” for the prevention of child sexual exploitation and abuse and the “Home for the Women” for the protection of women from domestic violence.

In his speech the President also referred to the implementation of 45 policies and actions with the aim of the substantial improvement and modernization of the services provided to the citizens and the effective dealing of the problems that arise.

Addressing the President of the Republic, the Deputy Minister said that assuming her duties she bears the enormous responsibility of implementing a series of policies that are part of the Government`s broader strategy for the creation of a strong welfare state.

She said that the reorganization of the Department of Social Welfare Services and its transformation into a Ministry of Social Welfare falls within the large and multidimensional effort of the State to strengthen existing policies for the well-being of citizens and ensure social cohesion.

Anthousi referred to a series of policies introduced so far, namely the GeSY, the Guaranteed Minimum Income, the new housing policy, reforms in the field of Education, the revision of family law, but also a series of reform bills that are pending in the House of Representatives.

She said that in a spirit of cooperation and goodwill she will work with the social partners to carry on the reforms and to achieve synergies and collaborations with all stakeholders, state departments and services as well as NGOs.

By gavriella
Previous articleWhat to do if you are COVID-19 close contact or confirmed case
Next articleVaccinations for hotel employees — 1,436 people interested