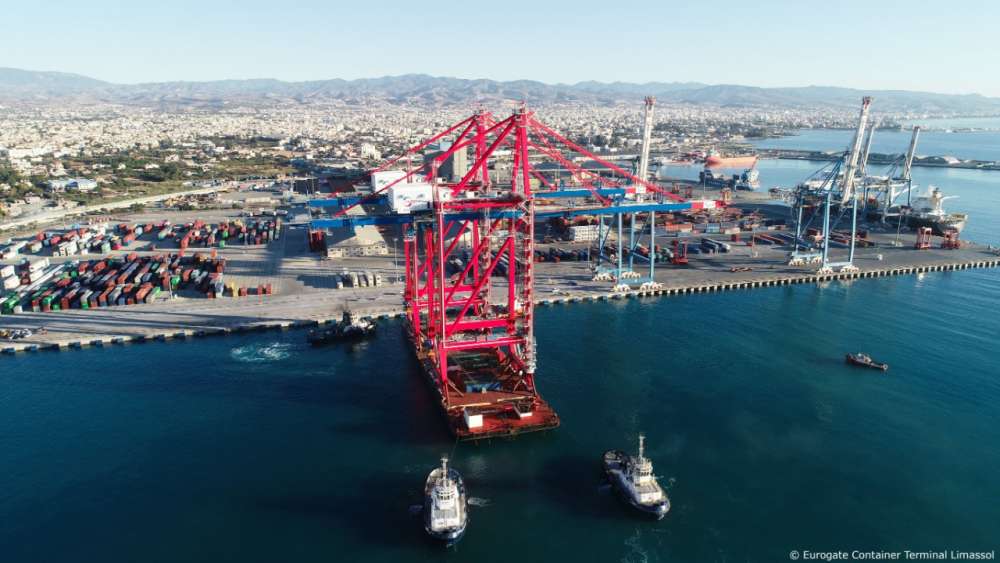 In the context of the company’s investment plan, two new “super post panamax” cranes (already in operation) as well as 17 new straddle carriers have been purchased.

With the purchase of the two cranes, the Limassol port is now in a position to serve the largest container ships and attract transhipment business.

In addition, three older cranes have been revamped, while equipment passed on by the Cyprus Port Authority has been upgraded. The company has also installed an innovative IT system and completed a series of construction projects, aiming to improve the terminal’s infrastructure.

The modernisation of the container terminal’s operating systems and infrastructure as well as the adoption of best international practices, have turned the Limassol port into one of the most advanced ports in the Eastern Mediterranean. The customers of the port are now served in a timely and efficient manner.

Addressing a media event, Eurogate’s Operations Manager,  George Pouros, said that “the ambitious targets that the company had set when it took over the terminal’s operation in January 2017 – to increase productivity, minimise ship waiting time at the port, and provide quality services – have been achieved”.

At the same time, he underlined that, in anticipation of the changes and necessary arrangements required to attract transhipment business, Eurogate is planning a second phase of investments with a view to further upgrade the Limassol port and turn it into a modern transhipment hub in the Eastern Mediterranean.

One more tests positive to Coronavirus

One more person has tested positive for coronavirus after 942 tests, the Health Ministry said on Monday, raising the total in Cyprus to 1,022. The...
Read more
World

Prime Minister Boris Johnson is set to ban Huawei from Britain's 5G network in a landmark decision that will anger Beijing but win plaudits from President...
Read more
Local

‘Views of the World’ animation festival returns to Salamiou

Countryside Animafest Cyprus, the island's official animation event that aims to showcase animation films from around the world has announced its 19th edition that...
Read more
Local

The Health Ministry said on Monday it has extended to August 12 the programme to test a total of 10,000 employees who returned to...
Read more
World

Within the framework of the Save Our Food programme and with a sense of responsibility towards society, Lidl Cyprus has proceeded in providing breakfast ...
Read more
Business

Emirates SkyCargo will be operating scheduled cargo flights to 100 destinations across six continents during the month of July 2020, including Larnaca, Cyprus. Apart from...
Read more
Business

Cyprus industrial production value and employment in the sector increased in 2018 by 11.4% and 7% respectively on an annual basis, data released by...
Read more