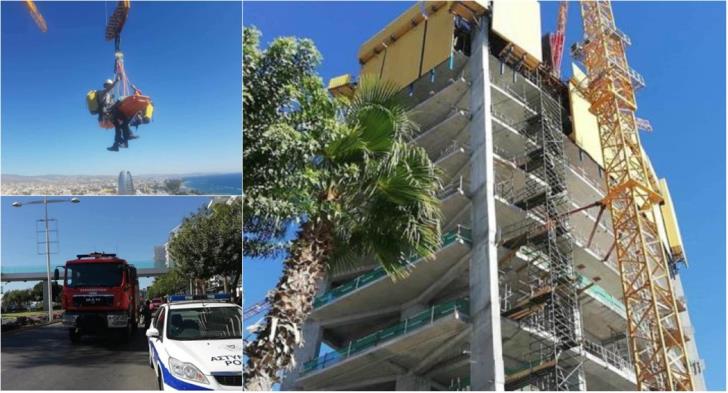 The injury of a worker on a 20 storey tower under construction in Limassol earlier this week has brought to the surface two problems: the building did not have an external elevator and the fire services do not have a platform for tall buildings.

This led to a delay in getting the injured man to the ground – the fire services used a crane – and then to the hospital where his condition is described as out of danger.

Fire services chief Markos Trangalos told CyBC that the building should have had an external electricity powered elevator, with a fallback electricity generator, to carry workers and material safely. Had such a lift been in place, then the injured man could have been brought to the ground in a few minutes.

In view of that, the fire service had three options – to use a helicopter which was dangerous because of winds, to use a rope that needed time, or to use the crane on site. The fire services opted for the latter option after first confirming with the Labour Inspection Department that it was suitable. He said that department had raised the absence of an external elevator one week before the accident.

According to Phileleftheros, in 2016 – and as high towers began to sprout in Nicosia and Limassol — a sum of €1.6m was approved to buy a platform for the fire service capable of reaching 60 metres. But instead of buying the platform, the money was used to buy 30 small rapid response fire trucks as their purchase was considered more pressing.

The newspaper said that it has now been decided that such a platform will be bought by 2020. The fire services currently have platforms that can go up as high as 30 metres.