Fire in Evia keeps spreading, as more evacuated villages are engulfed by flames 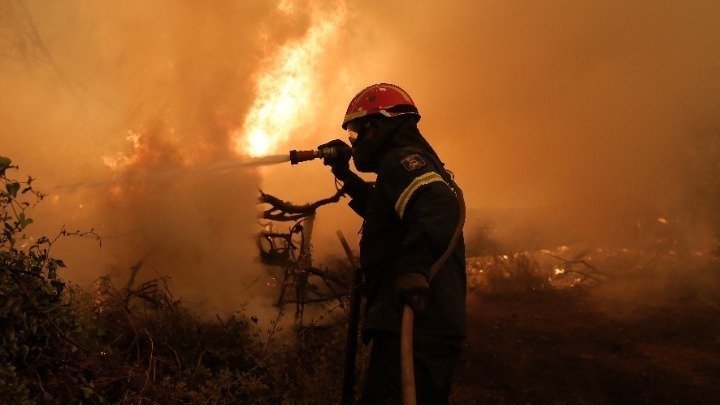 Three evacuated villages in northern Evia island are engulfed in flames, as authorities called for further evacuations on Sunday.

The multi-front fire in Evia has reached Galatsona, Ellinika and Agriovotano villages, while Gouves, Artemisio, Kastri, Vouliki and Pefki are called to evacuate through the 112 European emergency messaging system. Residents are advised to head toward Istiea, further north.

In the fires that began on Tuesday in Greece, the battle at Evia appears to show no ending yet. “The fronts are endless,” Angelos Missirlis, deputy mayor of Istiea-Edipsos -where evacuees are directed –  told Athens-Macedonian News Agency. “All villages are a single fire front. At places the fires expands, at other places it rekindles. This fire cannot be fought by heavy machinery” opening buffer zones, he said, “we need airborne forces immediately.”

The Galatsona, Geraki and Gouves front is over 8 km long and continues to expand east (on the Aegean side) to Agriovotano and to Avgaria in the west, facing the mainland.

The villages of Milia, Agdines and Tsapournia are facing rekindled fires, while at the southern section the fire at Troupi has rekindled.