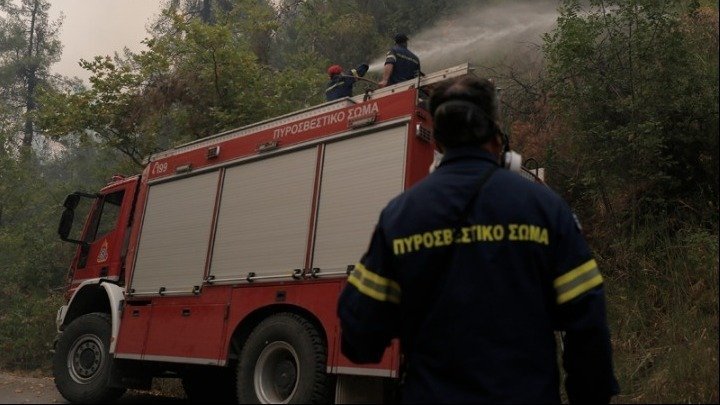 Many and dangerous were the rekindling in North Evia during the night when all the firefighting forces with the support of machinery were called to give solutions to small rekindling that turned into fire fronts and threatened villages.
The flames came very close to the villages of Artemisio and Kastri while the battle with the blaze continued throughout the night at the village of Gouves.
The efforts are now focused in Monokarya to prevent the blaze reaching the town of Istiea. Priority is also given to two villages, Kamatriades and Galatsades. According to Fire Brigade’s officers that are in northern Evia “if the fire passes from there it will get into a pine forest which is not accessible and it would be difficult to control it and it will finally reach the town of Edipsos. They also pointed out that the creation of fire breaks around the villages in the last hours prevented the extension of the damages inside inhabited areas.
The huge effort also continued in the south front to prevent the blaze of accessing Mt. Kandili. Over 200 Romanian and Ukrainian firefighters who arrived in Greece with their own equipment were operating throughout the night and gave a huge battle with the fire at the villages of Troupi, Kalyvia and Spathari assisted by volunteers, the region’s water trucks and other machinery.
However, the Fire Brigade officers’ concern is whether the firefighting aircraft will be able to fly on Monday due to the dense smoke that covers the area.

By gavriella
Previous articleParis assumes Olympic baton with celebration by Eiffel Tower
Next articleDepartment of Forests on alert; fines for causing a fire