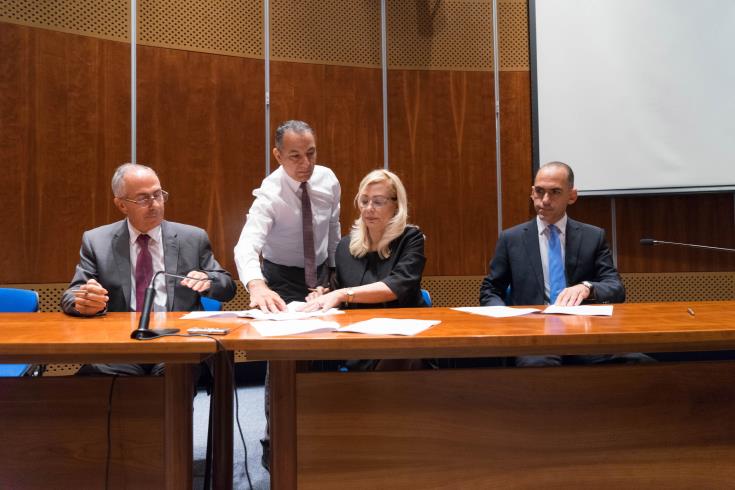 The Government, banks and credit acquiring companies signed on Friday at the Ministry of Finance memoranda of understanding for the implementation of the “Estia” scheme aiming to assist borrowers with non-performing loans collateralised with primary residences to repay their loans.

Finance Minister Harris Georgiades said that the signing of the memoranda marks a very important step towards tackling the problem of non-performing loans (NPLs) in Cyprus and warned Parliament that the Government would not agree to rushed amendments to the law on foreclosures that could pose new risks for the country. Nor is it a safe way out referring those laws to the Supreme Court, he underlined.

Earlier this month the House of Representatives approved a series of amendments to the legal framework governing foreclosures almost a year after improvements to the framework were adopted. President Nicos Anastasiades returned the legislation to the House of Representatives. A meeting of the parliamentary committee on budgetary and financial affairs will be convened on Monday, July 29 in the morning, to review the matter, and will be followed by a session of the Plenary.

Under the scheme, the state will cover one third of the eligible borrowers’ repayment plan, while the banks will reduce the eligible loans’ outstanding amount to the value of the primary residence. Eligible loans are those collateralised with primary residence with a market value of €350,000 that were on September 30 2017 classified as non-performing. Furthermore, income and household wealth criteria apply.

The memoranda were signed by Minister Georgiades and Labour Minister Zeta Emilianides on behalf of the Government. The participating banks and credit acquiring companies are the Bank of Cyprus, the Hellenic Bank, the Cyprus Asset Management Company (KEDIPES), Alpha Bank, Astrobank, Eurobank, the National Bank of Greece, the House Financing Organization and Gordian Holdings.

“Today we are making a very important step towards addressing the problem of non-performing loans, particularly those relating to primary residence, for which there is justifiably increased sensitivity”, the Finance Minister noted in his address.

He said the scheme that has been approved by the European Commission will provide the opportunity for loan restructuring and soften the obligations of a large proportion of borrowers that meet the relevant criteria.

Foreclosure procedures for primary residences that potentially fall under the scheme are suspended to allow the submission and examination of the applications.

The Minister reiterated the Government’s intention to devise an additional scheme for those cases that despite the “Estia” scheme will remain non-viable possibly because of the borrowers’ very low income.

Georgiades stressed that any amendments to the legislative framework should be made cautiously and after obtaining the opinion of the Central Bank of Cyprus and the European Central Bank.

“The Government would accept any change in the legislative framework that is approved by the supervisory authorities. But we will not agree to any change that is rushed and that will pose new risks to the country. Nor is it a safe way out referring these laws to the Supreme Court because the supervisory authorities, rating agencies, investors may react anyway and negative effects will occur in this case also”, he underlined.

Labour Minister Zeta Emilianiades said that her Ministry that is responsible for the implementation of the “Estia” was ready to run the scheme successfully.

The necessary work has been concluded and “we are completely ready to start checking those applications” in September, she added.

According to the chairman of the Association of Cyprus Banks and Hellenic Bank CEO Ioannis Matsis, banks have started sending letters to eligible borrowers and there is already a satisfactory response.

Matsis stressed that the banks will show zero tolerance to strategic defaulters.

He also called on the Parliament to approve the return of the new foreclosures legislation by the President, warning that any other development would endanger the stability of Cyprus’ banking and financial sector.

By In Cyprus
Previous articleClub floor collapses in S.Korea as athletes dance; 2 people dead
Next articleCyprus exported 29,000 tons of halloumi in 2018