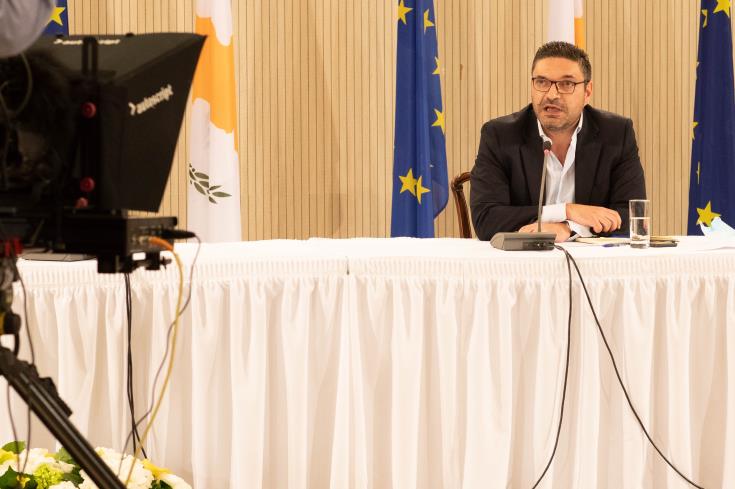 Minister of Finance Constantinos Petrides called on parliamentary parties to approve a bill on government guarantees for loans to corporations and small businesses hit by the coronavirus outbreak, noting that the state’s fiscal capacity is not limitless.

“Cyprus must not be left to fight this war without the weapon of guarantees,” Petrides said during a press conference at the Presidential Palace to announce the extension measures aiming to curb the spread of the disease and to alleviate the financial impact to businesses and households.

The measures aim to save lives but also entail significant financial impact, he said.

“In this war we want to use all weapons at our disposal,” Petrides stressed, adding that Cyprus has implemented a bold fiscal package aiming at supporting the employees’ income but also businesses covering a large part of their wage bill so they will not bankrupt.

The Finance Minister warned however about the fiscal impact as a result of increased state expenditure due to the stimulus package but also to a large extent from reduced government revenue.

For this reason, he added, Cyprus achieved yesterday a dual bond issuance with relatively favourable interest rates, enhancing reserves in a bid to continue supporting the economy.

However, Petrides warned that “our fiscal capacity is not without limits,” recalling that EU member states use multiple tools to combat the crisis, either through fiscal measures or by providing liquidity injections utilizing the banking sector’s liquidity.

He also rejected views that the state will provide money to the banks, noting that the EU temporary state aid framework clearly provides for the provision of credit to businesses and that the state will cover 70% of the credit risk and the banks will shoulder the remaining 30% for loans with a defined and very favourable interest rate between 0.75% and 1.5%.

“With this scheme the banks will assume risk and that is certain and not theoretical,” he added

“I don’t believe we should be a country marching to this great war without this weapon,” he added.

Petrides said he will exhaust the dialogue and appealed to the political parties “to provide this tool to our businesspeople and the self-employed, facilitating the recovery from this very difficult situation in the best possible way.”

Furthermore, Petrides pointed out that the Ministry is preparing scenarios which see economic activity returning after September.

He added that the Ministry is drafting a medium-term plan based on three pillars.

These pillars, concern Cyprus’ financing needs, rationalizing the state budget with a series of short-term measures and the recovery of economic activity.

“This plan concerning recovery is based on some assumptions covering the period after September and how we could adjust our economic policy so that we could recover in the best possible way,” he added, noting however that these plans are characterized by a large degree of uncertainty.

“We are making the best possible short and medium-term plans but everything depends on the extend of the pandemic”, he concluded.

Meanwhile, businesses and employees will continue to receive state support for a further four months if they continue to have a turnover of less than 50%, announced Labour, Welfare and Social Insurance Minister Zeta Emilianidou.

Answering questions during the press conference, Emilianidou reminded the decision taken earlier Wednesday that the government will continue to financially support businesses and workers until the  June 12 in an effort to restart economic activity.

However, those businesses that continue to be unable to recover 50% of their turnover, depending on the criteria related to the ongoing reduction, will be supported for a further four months by 50%.

This, she said, is very significant because the provision requiring businesses not to dismiss people, will be valid for seven months as the state support will be maintained during these months to help them recover their economic activities.

By In Cyprus
Previous articleCyprus has secured enough chloroquine for 240,000
Next articleForex industry hit the least by coronavirus