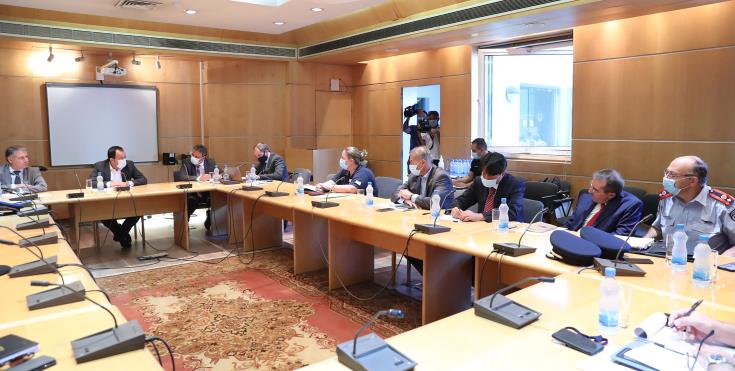 Cyprus Foreign Affairs Minister Nikos Christodoulides has said that 50 Cypriot nationals have shown interest for repatriation from Lebanon until 14:00 local Cyprus time, following the massive explosions in Beirut on Tuesday.

Christodoulides said a chartered flight on Thursday will transport Cypriots to the island and it will also carry to Lebanon any help that is gathered by then, and more specifically medical equipment and first aid supplies.

He also noted that special teams of EMAK, the disaster response unit of the Cyprus fire service, and the Police Emergency Response Unit (MMAD) along with search dogs, will fly to Lebanon on two Police helicopters, to help find people who are still trapped amidst the ruins after the explosions.

The first one, he noted, concerns Cypriots who are in Lebanon. “It has been decided for a flight to be chartered tomorrow to transport Cypriots from Lebanon to Cyprus. Those who are interested to return must express their interest on the special online platform of the Foreign Ministry or by calling at 22801000,” he said.

He went on to say that on the basis of the interest that will be expressed until this afternoon they will decide when the flight will depart from Lebanon.

Christodoulides said that those who will arrive to Cyprus at Larnaca airport from Lebanon will be tested for Covid-19 upon their arrival and will remain in self-isolation for 14 days, as provided by the Health Ministry protocols, since Lebanon is included in category C of countries based on its Covid-19 epidemiological outlook.

The second direction, he added, has to do with the assistance that the government of Lebanon has officially requested.

“We are in constant contact with the Lebanese authorities with a view to respond to the difficult situation they are facing,” he added, noting that special teams of EMAK, the disaster response unit of the Cyprus fire service, and the Police Emergency Response Unit (MMAD) along with search dogs, will fly to Lebanon on two Police helicopters, to help find people who are trapped in the ruins after the explosions.

The Foreign Minister also said that preparations are underway so that members of EMAK, the Civil Defence Department and the Ambulance Department will be ready tomorrow to contribute to the efforts of the authorities of Lebanon, CNA reports.