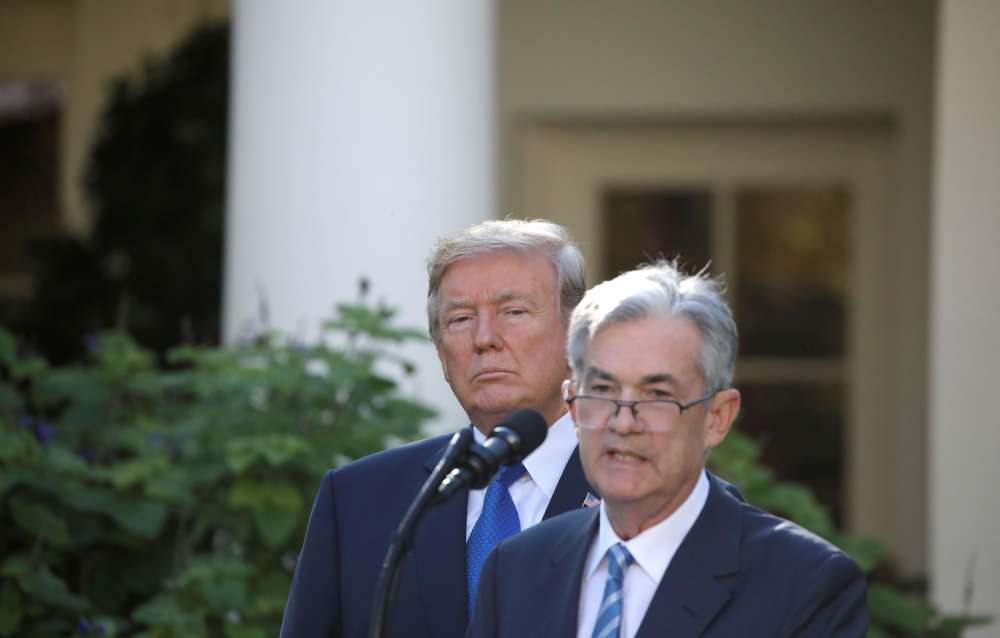 It has become a jarring and frequent contradiction. President Donald Trump blames the Federal Reserve for putting the U.S. economy at risk while data shows an economy in “reasonably good” shape, as the head of the central bank recently said.

But behind that confusing dance between a norm-breaking Republican president and a stick-to-its-knitting Fed lies a dilemma for Trump.

“Reasonably good” is not what Trump promised to deliver during his 2016 campaign, and at this point he heads into a reelection year short of the key economic goals he set and worried a recession could undermine his bid for a second term.

Growth is ebbing and well below the 3% annual rate he said his administration would hit; the trade deficit has widened and there is no sign of the “easy” victory he said would come in a trade war with China; far from the surge in investment he promised would follow a corporate tax cut, business capital spending of late has been a drag on growth overall.

Each month there are more jobs. But that has been true for nearly nine years, and as on many fronts the best days of “Trumponomics” may be in the past as the economy’s performance reverts to an Obama-era trend of around 2% annual growth.

“He is so focused on the Fed because in terms of avoiding a recession that is truly in his eyes his biggest obstacle,” to reelection, said a source in regular communication with the White House, explaining that Trump wants to take no chances, even if the risk of a downturn is low.

It’s in that context that Trump scorns a central bank whose longer-term approach to policy has clashed with his more immediate interests – the same tension apparent in other battles between the president and government agencies with their own institutional powers or culture.

In the Fed’s case, while its chairman and Washington-based governors are appointed by the president, its responsibility is to a “mandate” established by Congress.

The Fed’s goals of “maximum employment, stable prices, and moderate long-term interest rates” are distinct from, and sometimes in conflict with, the economic or political priorities of the party in power, whether it’s maximizing annual growth, gaining leverage in a trade negotiation or, gaining economic momentum in an election year with interest rates lower than the data would warrant.

Other things equal, lower interest rates can boost economic activity by encouraging households and businesses to borrow, spend and invest, but can also lead to financial excesses as happened in the early 2000s in the U.S. mortgage market, and – less of a concern today – inflation.

Managing those mandated goals, Fed officials note, can require tradeoffs, involves looking further ahead than can be forecast with certainty, and always includes a judgment about whether the lower unemployment and other benefits that might come with easier monetary policy are worth the risks involved.

Trump’s demands that the Fed stimulate the economy, by contrast, have covered a gamut of immediate needs, and moved well beyond convention to suggest, for example, that the Fed restart crisis-era asset purchases at a time of historically low unemployment.

One day it’s to support a wobbly stock market. The next to boost growth, and then later to gain an upper hand in trade talks through a cheaper dollar, as Trump demanded twice last week when he said the U.S. central bank should not allow the rate cuts and currency moves of other nations to offset the impact of tariffs he has imposed.

When rates remained low through President Barack Obama’s reelection campaign and second term, Trump said the Fed had “become very political.” Advisers familiar with his thinking say he now expects the same treatment, even if the economy is in a different place.

It’s debatable whether the Fed-bashing has had much influence.

The source close to the administration said Trump believes his “relentless” public criticism of Fed Chairman Jerome Powell “has gotten him to play ball.” The central bank cut rates by a quarter of a percentage point at its July 30-31 policy meeting.

Powell, the private equity lawyer handpicked by Trump to head the Fed only to be blasted later by the president as an incompetent “nobody,” has emphasized that he was “not going to make mistakes of character or integrity” – in other words, that he would not take Trump’s election prospects into consideration in setting policy.

The Fed has in fact steadily shifted gears since late last year but for a variety of reasons, including a sense that the fallout from trade wars may be greater than expected, and that its own estimate of the appropriate interest rate for the current state of the U.S. economy was too high.

Perhaps above all was evidence that the faster growth produced by the $1.5 trillion tax cut package passed in late 2017 and higher federal government spending in 2018 was fading quicker than expected.

Early last year “we were looking for growth above trend and continued improvement in the unemployment rate,” Chicago Fed President Charles Evans said last week. By later in the year “we began to wonder if things were playing out in a softer fashion … The tax bill’s influence on business fixed investment was harder to see, it was sort of waning … Trade negotiations were taking place with a brinkmanship style and that led to more uncertainty.”

In response, the Fed first shelved its plans to steadily raise rates this year. That decision came on the heels of four rate increases in 2018.

At the most recent policy meeting, the Fed’s rate-setting committee decided to go even further by cutting the central bank’s benchmark overnight lending rate.

The move was, arguably, a response to Trump – but to his actions, not his direct demands. In May, the president unnerved investors by threatening to impose tariffs on Mexico unless it curbed the flow of migrants heading north into the United States.

Although a deal was reached to avert the tariffs, the linkage of trade policy to a largely non-economic goal resonated deeply among Fed officials, who became convinced they needed some rate cut “insurance” to protect the U.S. economic expansion from an increasingly uncertain global environment.

But if the rate cut raised questions about whether the central bank was now tethered to Trump’s tweets – destined to consider rate cuts when any threatened tariffs sent markets into a tailspin – Fed policymakers last week tried to put some distance between themselves and the Oval Office.

Although traders are expecting the Fed to cut rates two more times this year, and some bond pricing may reflect a rising risk of a recession, Fed officials feel a downturn is unlikely and that they have matters in hand.

“It certainly became clear to me with the Mexico situation … that trade policy uncertainty is going to be high. It is going to be high into the foreseeable future,” Bullard said. “We’ve adjusted for the ratcheting up … Let’s wait and see how the economy responds to that.”

By In Cyprus
Previous article2019 a difficult year for tourism but no need to panic, Deputy Minister says
Next article41 C inland again on Monday, some respite from Wednesday