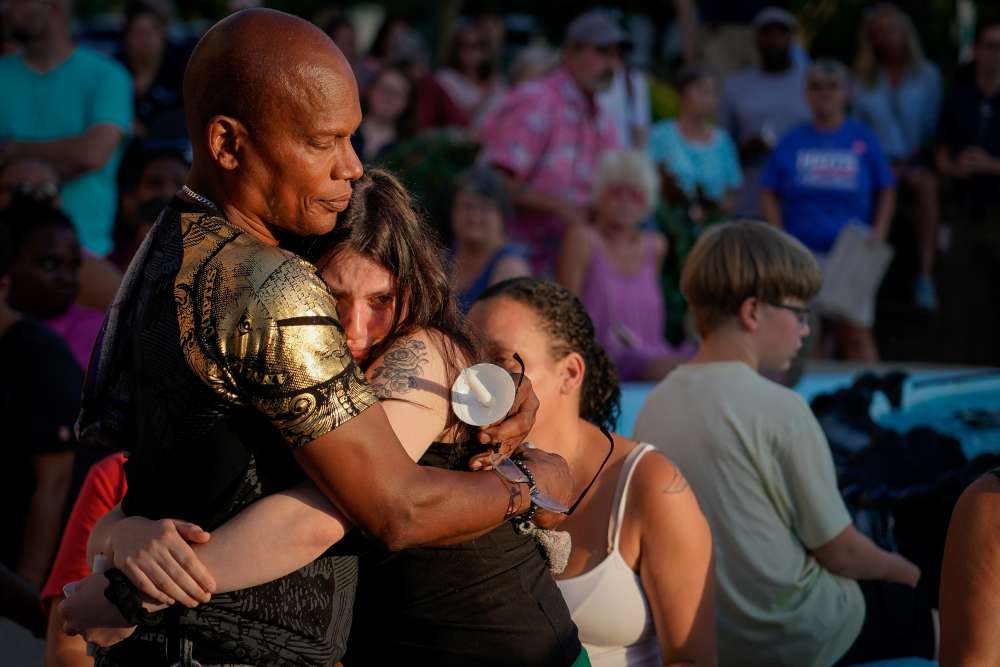 The gunman who killed his sister and eight other people in Dayton, Ohio, before he was slain by police had a history of violent obsessions and previously mused about committing mass murder, an FBI official said on Tuesday.

FBI agent Todd Wickerham told a news conference two days after the massacre in the streets of Dayton’s historic downtown Oregon District that investigators have yet to conclude what motivated the killer or whether he may have had an accomplice.

Police said in the initial aftermath of Sunday morning’s bloodshed they believed the slain suspect, identified as 24-year-old Connor Betts, a white man from the Dayton suburb of Bellbrook, had acted alone.

The gunman, who was wearing body armour and a mask, opened fire with an assault-style rifle fitted with a high-capacity ammunition drum that could hold 100 rounds, police said. Authorities said officers patrolling the area arrived on the scene and shot the gunman dead 30 seconds after the violence began.

In addition to the nine people killed, including Betts’ sister, more than two dozen others were injured in the attack, which came 13 hours after a shooting spree that claimed 22 lives in El Paso, Texas.

The suspected assailant in Texas surrendered to police and has been charged with capital murder in what authorities are treating as a hate crime and act of domestic terrorism. Most of the victims were Hispanic.

Federal agents have found no clues suggesting the Dayton gunman was influenced by the rampage in El Paso, said Wickerham, the agent in charge of the FBI’s Cincinnati office.

However, he said, “The individual had a history of obsession with violent ideations, including mass shootings, and expressed a desire to commit a mass shooting.”

“We have uncovered evidence throughout the course of our investigation that the shooter was exploring violent ideologies,” Wickerham added.

Much remains unclear. The agent said investigators were seeking to determine what particular ideology may have influenced the gunman, “who, if anyone, helped him or had any advance knowledge of his intentions to conduct this attack, and why he committed this specific act of violence.”

Wickerham said nothing so far indicated the shooting spree was racially motivated, though six of the nine dead were African-American.

Authorities have said that Betts was known to have been a troubled youth in high school, at one point drawing up a “hit list” of students he wanted to kill or otherwise harm.

The Dayton Daily News, citing the recollections of former classmates, reported Betts had been suspended from high school, and detained by police, over the hit list. But Bellbrook police said it had no record of such an incident, the paper reported.

A former girlfriend of Betts, Adelia Johnson, told CNN that he had once shown her a video on his phone of a mass shooting.

“It wasn’t a red flag, which I know is weird to a lot of people, but given the context of him being a psychology student and fascinated in the psychology of these things, that’s what made it digestible,” Johnson told CNN.

Ohio Governor Mike DeWine, responding to mounting public pressure for action to curb gun violence, proposed a “red flag” law that would allow a judge to order firearms confiscated from any individual deemed to be a threat to themselves or others. Law enforcement and family members could petition the court for such an order.

“We have an obligation to each other,” DeWine, a Republican backed by the National Rifle Association gun lobby, said at a news briefing. “If someone is showing signs of trouble or problems, we must help and we must not turn away.”

The governor was heckled on Sunday night as he spoke at a vigil for the victims of the rampage. Protesters repeatedly chanted “Do something!” a reference to perceived state and federal inaction to curb U.S. gun violence.

DeWine, who took office in January, previously expressed support for red flag laws after a deadly shooting at a California synagogue in April.

Seventeen states and the District of Columbia have red flag laws on the books, according to the gun-control advocacy group Giffords. Most are under majority Democratic governments. DeWine’s proposal could meet resistance in the Republican-controlled Ohio legislature.

In an address to the nation on Monday, President Donald Trump also backed laws to allow guns to be seized from dangerous individuals, while calling for tighter monitoring of the internet, mental health reform and wider use of the death penalty in response to mass shootings.

The president confirmed on Tuesday that he planned to visit both Dayton and El Paso on Wednesday to meet with first responders, law enforcement officials and victims.

Dayton Mayor Nan Whaley, a Democrat, said she would welcome the president but plans to tell Trump that his comments “weren’t very helpful to the issue around guns,” referring to his remarks on Monday about ways to curb gun violence.