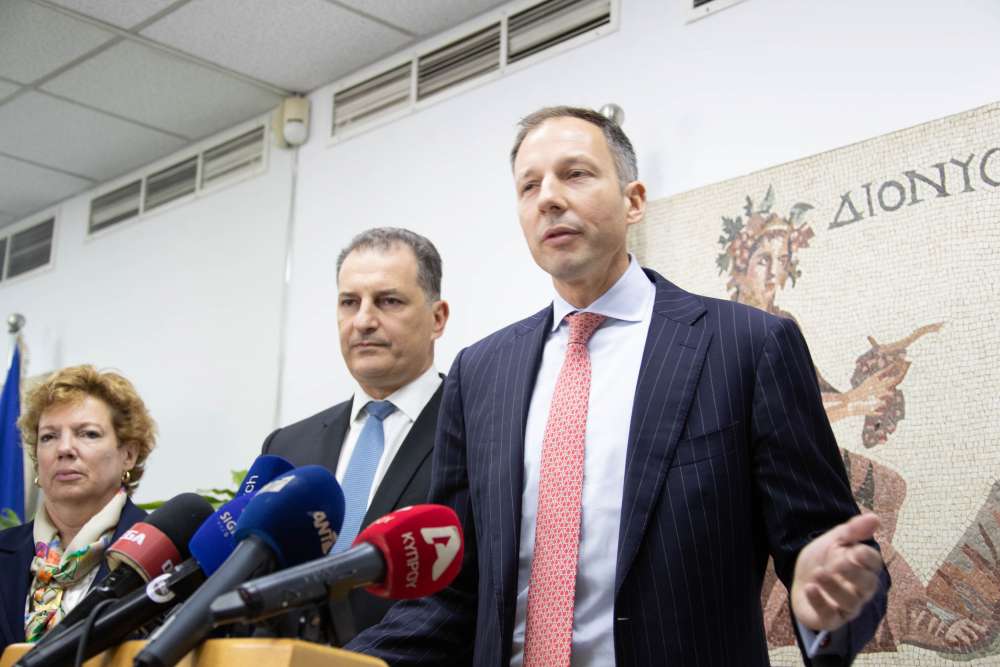 U.S. Assistant Secretary of State for Energy Resources Francis Fannon said that the United States were unwavering on their commitment to support the right of the Republic of Cyprus to develop its resources in its Exclusive Economic Zone (EEZ).

“We continue the long-standing position of the United States that we strongly support the right of the Republic of Cyprus to develop its resources in its EEZ. We are unwavering on that commitment,” said Fannon in an interview with CNA on the occasion of his visit to Cyprus on Friday.

At the same time, he said that the United States “encourage the two communities to continue to work towards comprehensive resolution and ensure that any and all proceeds from that mineral wealth are shared equitably.”

He also said that the United States were seeking to engage with the countries of Eastern Mediterranean region and that he was planning to be back in Cyprus next year in order to continue faster that regional cooperation.

Fannon who came to Cyprus after visiting Israel and before going to Egypt, in an energy focused tour of the region, said that the United State have been looking the Eastern Mediterranean as a region for energy development and energy cooperation, trying to support the development of the countries in the region but also the potential for meaningful exports to the rest of Europe and possibly around the world.

Back to Cyprus next year
———————————-
Asked whether the U.S. are planning to participate to the trilateral cooperation schemes that have been formed between the countries of the region, the US Assistant Secretary of State said that the purpose of his visit was to better understand the regional approach specifically in the energy field. He also said that the U.S. were seeking to engaged with all the parties in the region.

“This certainly will not be my last trip to Cyprus,” he said, pointing out that he was planning to be back next year and hopefully to continue the discussion, see the positive developments and continue faster the regional cooperation.

“The Eastern Mediterranean as a region is a priority for my office to focus on. We are at the beginning stages of something that it can be very significant and potentially a model for how energy collaboration on regional basis can foster energy security, development and also improve the economic well-being of the respective countries in the region,” he said.

He also pointed out the importance of Eastern Mediterranean for energy security and for diversification of energy types, sources and routes.

“We think that Eastern Mediterranean has a great opportunity to contribute to energy security elsewhere, but also to support energy security here, in the region,” he noted.

“This is a remarkable time,” he said, noting that countries that a decade ago had no energy are now engaged to export energy, giving the example of Israel, exporting gas to Jordan and Egypt and the future development of “Aphrodite” field of Cyprus for exports to Egypt.

“We think energy is a catalyst for cooperation in the region and I think that it has broader, very positive foreign policy impacts.”

“Cyprus is open for business”
——————————————-
Referring to his Friday morning meeting with Cyprus’ Minister of Energy Yiorgos Lakkotrypis, Fannon said that they talked about the opportunities for collaboration between the two countries. They also talked about the business cycle and how long it takes to develop a resource and the conditions that attract increased investment and interest in Cyprus.

As he said the investment of energy companies were not only determined by the geology, but also by “what’s above ground”.

“Companies need to have predictability, business certainty, transparency, rule of law, contract sanctity. These are the conditions that determine where to invest and we are really pleased that there’s so much interest in the Eastern Mediterranean and in Cyprus in particular.”

Asked whether there’s interest by U.S. companies to supply Cyprus with Liquified Natural Gas (LNG) through an LNG terminal, Fannon said he was looking forward after his trip, to talk to US companies about a variety of opportunities in Cyprus, making sure that “the US industry is aware that Cyprus is open for business, including as a market to establish an LNG terminal.”

In terms of having an LNG export facility in Cyprus, in case of a big discovery in Cyprus, Fannon said that a lot of work over several years would be needed, in order to understand the volumes, the quality and the destination of that gas. As he said the U.S. will monitor that possibility very closely but it would be a commercial decision for the parties (companies and the Cyprus Government) to make.

“We think more gas supply from different sources is better for everybody”, he added.

He also noted that the US has also been supportive of projects within Europe and for which there’s no US direct investment at all, as the Southern Gas Corridor, because they advance the policy of diversification and increased energy security.

Fannon pointed out that the US position on LNG was to export it everywhere, not only in Europe, but also in other regions as the Indo-Pacific region, where there’s growing demand. But that, as he said, is for companies to decide.