FACTBOX-Brexit: What will happen in the British parliament on Thursday? 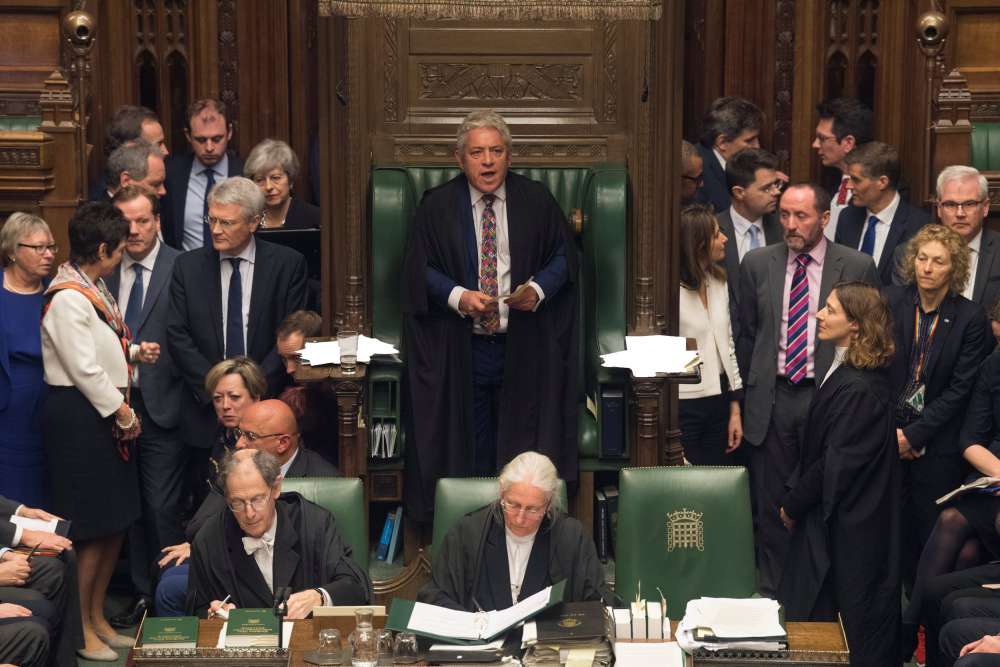 The British parliament will hold a Brexit debate on Thursday. This is not a re-run of a vote last month on whether to approve the exit deal Prime Minister Theresa May negotiated with the European Union.

May is seeking changes to her deal with Brussels after it was rejected by a record majority in parliament on Jan. 15. She has said she wants to bring a revised deal back to parliament for a vote soon, but has not yet set a date.

But May could face a symbolic defeat which would undermine her pledge to the EU that, with changes, she can get an exit agreement approved by parliament at a later date.

Below is what will happen on Thursday:

A motion which states that parliament welcomes May’s Feb. 12 update on progress in seeking changes to the agreement, and reaffirms its support for a vote on Jan. 29 that she should seek to renegotiate the part of the deal relating to the future of the Ireland-Northern Ireland border. Lawmakers also voted on Jan. 29 in favour of avoiding a ‘no-deal’ exit from the EU.

Yes. They are known as amendments.

However this is not expected to be a crunch point in which lawmakers attempt to wrest control of the process away from the government as May has promised that parliament will have another chance to express its opinion on Feb. 27, if it has not approved a revised deal by then.

Opposition Labour Party lawmaker Yvette Cooper has said she will wait until that date to seek lawmakers’ support for legislation that would force the government to decide between leaving without a deal or extending the Article 50 negotiation period if it has not had a deal approved by March 13.

Below are the amendments put forward so far:

Put forward by the Labour Party. It calls on the government to either give parliament a vote on a revised deal or a chance to express its opinion on what happens next by Feb. 27.

Proposed by Labour lawmaker Roger Godsiff, this calls for the government to request an extension to Article 50 and call a referendum which gives Britons the choice between accepting May’s agreement, leaving without a deal or staying in the EU.

Put forward by Conservative Party lawmaker Ken Clarke, this calls for parliament to vote on a range of Brexit options to determine what could win the support of a majority of lawmakers.

Proposed by Scottish National Party lawmakers, it calls on the government to reverse the decision to leave the EU by revoking Article 50.

Put forward by lawmakers from both May’s Conservative Party and the Labour Party, it calls on the government to publish, within seven days, its latest analysis of the impact of a no-deal Brexit on business and trade.

Led by a member of May’s party, this amendment looks to bind the government into holding a day of debate on Feb. 26, at which lawmakers can vote to approve alternative strategies for leaving the EU.

Proposed by Welsh nationalist lawmakers, this calls for a delay to Brexit and a second referendum.

Put forward by Labour Party lawmakers but without the backing of its leadership, it calls for a delay to Brexit, a referendum to approve any exit agreement and says the government must seek closer ties with the EU.

Under this amendment Scottish National Party lawmakers want to force the government to delay Brexit and extend the negotiating period by at least three months.

The pro-EU Liberal Democrat party propose that, if parliament has not approved a revised Brexit deal by Feb. 27, May should immediately seek an extension to the negotiating period in order to hold a second referendum on whether to leave the EU with a deal or remain a member of the bloc.

WILL THERE BE VOTES?

Speaker John Bercow will decide whether to select any of the amendments for a vote at the start of the debate, around 1130 GMT. Lawmakers will vote on each of the selected amendments one by one, before voting to give final approval to the wording of the motion itself. Voting is due to begin at 1700 GMT. Each vote takes around 15 minutes. The result is read out in parliament.

WHAT HAPPENS AFTER THAT?

If lawmakers support the motion and give May more time to negotiate, nothing will immediately change after Thursday’s vote. The government will keep pursuing its plan to change the exit agreement and put a deal to parliament as soon as possible.

If any amendments are passed, they are not binding on the government but could put pressure on it to change course.

Members of the pro-Brexit ERG group of Conservative lawmakers are threatening to oppose the motion because it acknowledges that parliament voted on Jan. 29 to approve a symbolic proposal calling on the government to stop a disorderly no-deal exit.

If the motion is rejected, it would undermine May’s efforts to show Brussels that if they do agree to renegotiate the Irish backstop, she has a stable majority in parliament and can get the deal passed.

By In Cyprus
Previous articleBritain’s Prince Philip, 97, will not be prosecuted over car crash
Next articleLightning strike leaves 28 villages in the occupied north without power