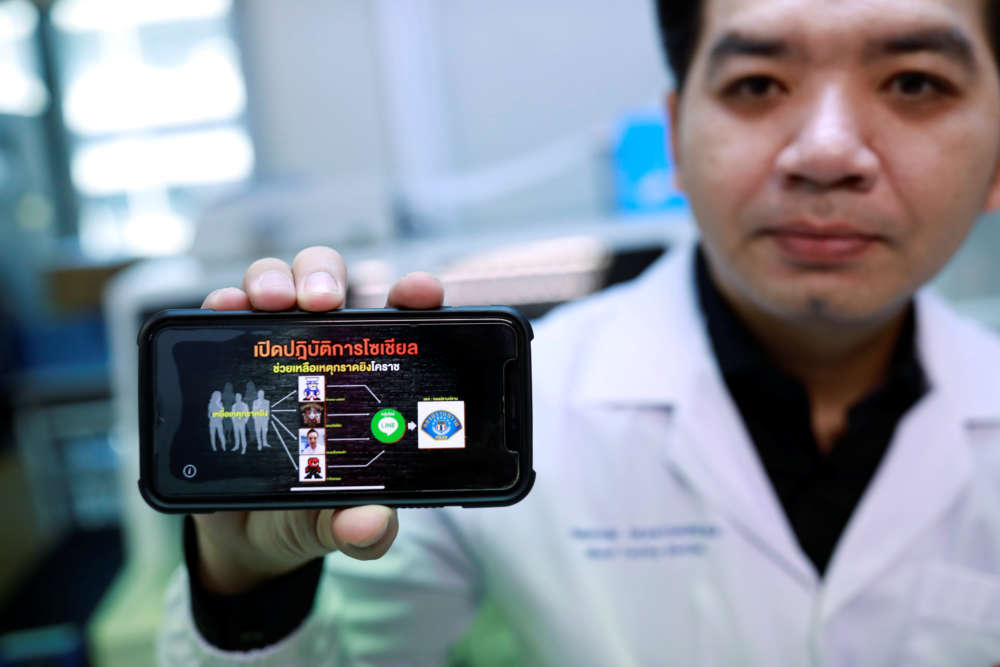 Facebook celebrity doctor Parkphum Dejhutsadin said his phone suddenly started pinging on Saturday – scores of his two million followers in Thailand were desperate and they needed his help.

With nowhere to turn as they cowered in a shopping mall from a rogue soldier who had already killed more than two dozen people, they looked to Facebook and other social media to send their pleas and to try to find escape.

Parkphum could help – and said for the next 16 hours that’s all he did: living up to his panda-eyed Facebook persona as sleepless doctor “Mor Lab Panda”.

“They told me where they were and sent me pictures of their hiding places. Authorities didn’t know where anybody was hiding. But I knew everything,” said Parkphum. “I didn’t sleep a wink. I didn’t want them to die.”

While social media have been accused of exacerbating or even encouraging mass shootings such as last year’s mosque massacre in Christchurch, New Zealand, in Thailand they were also crucial to pulling off a safe and dramatic rescue from the shopping mall in Nakhon Ratchasima city.

Before 32-year-old killer Jakrapanth Thomma was cornered in a basement and shot dead, Thai commandos managed to coordinate raids into the mall to spring hundreds of people to safety.

“We were communicating on Facebook with the people inside to exchange information,” Pongpipat Siripornwiwat, deputy commander of Nakhon Ratchasima police, told Reuters. “Without it, our work would’ve been very difficult and we wouldn’t have had any idea how many were trapped and what was going on inside.”

The tragedy underscored the extent to which Facebook is the communication platform for daily life in the country of 69 million which has about 56 million active users a month and where the average person spends three hours a day on social media. Most social media activity is on mobile phones.

And it was on Facebook that the killer, apparently angered by a property deal gone sour, first signalled his intentions.

“Do they think they can spend the money in hell?” his post ended, roughly three hours before he opened fire at a house, then moved to an army camp, a temple and then the shopping mall – leaving a trail of murder behind him.

At one point he posted a selfie in front of a fire.

His last message before his Facebook account was shut down – “Should I give up?” – came nearly four hours after the first shot.

But after facing criticism for failing to take down the Christchurch shooter’s livestream quickly and when a Thai father murdered his child on Facebook Live in 2017, the world’s biggest social media company moved faster once it heard what was happening.

It shut his Facebook and Instagram accounts and then worked to remove anything that he had posted and was being shared by others – including by spoof accounts apparently set up in his name by other people after his own was blocked.

“There is no place on Facebook for people who commit this kind of atrocity, nor do we allow people to praise or support this attack,” a Facebook representative said in a statement, adding that it worked closely with Thai authorities to take down content that violated its policies.

“We also responded to emergency requests from the Royal Thai Police to share information related to the shooter to prevent further harm,” it said, without giving further details.

Twitter, where graphic videos of the incident were circulated, said it also took action – a company representative said it monitored its platform to remove video content of the attack and to shield graphic content from view.

But police said the shooter, who killed at least 29 people and wounded 57 before he was stopped, had not only used social media to publicise what he was doing but also to track police movements through online news sites.

“Social media was a double-edged sword. It helped police rescue people, but it also helped him keep up with our movements,” said Pongpipat.

Parkphum, a medical technologist working for Thailand’s National Blood Center, is so famous he even has his own set of stickers for social media messaging apps with his trademark “panda eyes” and white coat.

“Every message from the people about where they were hiding and how many were with them all turned out to be true when police got there. People were hiding in (fashion store) H&M, Eveandboy (a cosmetics shop), a gym. I now know the entire floor plan of the mall,” he said.

Other Facebook celebrities with millions of followers also stepped in to coordinate and reassure.

“I told them to stay as quiet as possible and mute their phones, to send their locations and phone numbers,” said Witawat Siriprachai, 36, known by Thais as the “Sergeant” of the social commentary page “Drama-addict”.

“I warned them not to livestream from their locations, because the shooter was also using Facebook during the rampage,” said Witawat, who is not a sergeant in real life.

At the shopping mall, 42-year-old Pat said she had just finished a meal when she heard the first shots and ran to hide in a mobile phone store. She said she was still traumatised and did not want to give her full name.

For five hours she said she scrolled through her Facebook newsfeeds to keep up with what was happening. Afraid to make the slightest noise she messaged friends who told her where to contact the police.

“I waited in complete darkness, and then the police replied to ask my exact location,” she said.

Police worked with the information she gave to coordinate an escape route and timing for people on that floor – and when they gave clearance that the shooter was three floors down, everybody just sprinted to the fire exit.

At a crouching run, masked commandos led them to safety.

Just before 11 p.m., she posted to friends that she was safe.