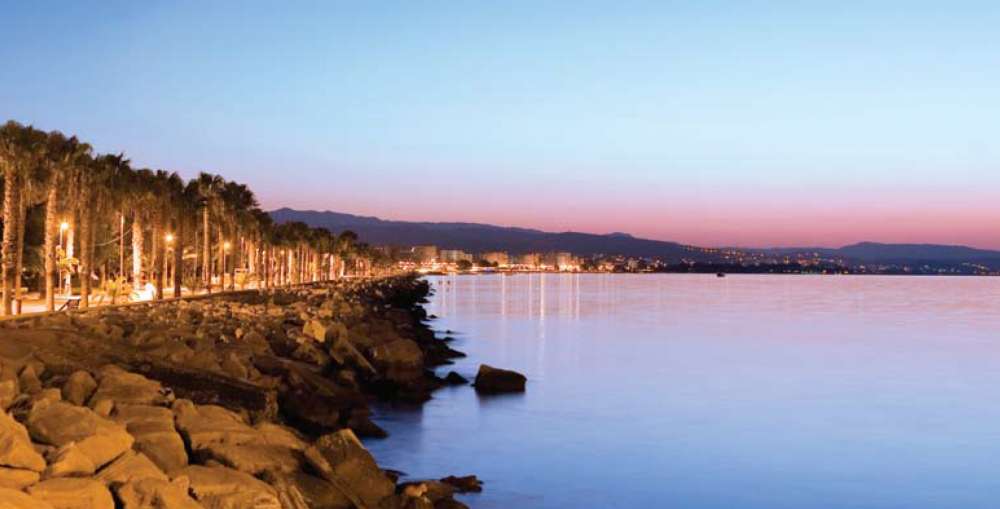 Limassol is the second largest city of Cyprus with a population of approximately 180,000. It is one of six districts and covers an area of 34.87 square kilometers. Located on the southern coast, Limassol stretches around westward to the Paphos district, bordering with the district of Larnaca on the east and with Nicosia on the north.

In addition to the recognized popularity as a tourism destination, Limassol is also an administrative and business centre, a port, a resort, the centre of the wine industry and home to many archeological sites.

The vivacious city centre, seems to offer a journey through time where the University with its bustling young students aiming for a brighter future is just a few streets away from the old market and ancient castle which link us to the past. Gracefully blending old with new continues, as across the seafront one can appreciate the cosmopolitan side of Limassol with its contemporary business structures and modern apartment buildings while only several kilometers away one can find charming areas with cobblestone streets, quaint buildings with overhanging terraces under which there are a profusion of small shops, restaurants and cafes.

The city of Limassol has a rich history that goes back to around the 2nd century B.C.

The city of Limassol is situated between the ancient cities of Amathous to the east and Kourion to the west. Limassol was inhabited since the very ancient years and tombs discovered there date back to around the 2nd century B.C., while others date back to around the 8th and 4th centuries B.C. The few ancient finds that were discovered show that a small settlement existed there which did not manage to develop and flourish.

The city, in the 10th century, was known as Nemesos and the Byzantine emperor, Constantine Porphyrogenitus, refers to this city with this name.

The history of the city is mainly known for its events in 1191 A.D., which marked the end of the Byzantine Rule in Cyprus. The king of England, Richard the Lionheart, foresaw the strategic importance of Cyprus as a base for supplying the forces taking part in the Third Crusade and conquered the island. Richard celebrated his marriage to Berengaria in Limassol where the latter was crowned Queen of England. And that is how the Byzantine Rule in Cyprus came to an end.

Limassol was then surrendered to the Frankish Empire of the Lusignan Kings of the medieval Cypriot kingdom. For about three centuries (1192-1489), Limassol experienced a remarkable period of prosperity. In 1489 A.D., the Queen of Cyprus, Ekaterini Cornaro, surrendered Cyprus to the city of Venice. This lasted until the Turkish Occupation took place in 1570 A.D. Then the British conquered Cyprus in 1878, while in 1960 significant changes followed the liberation of Cyprus, which contributed to the cultural and artistic life of the city. Schools, theatres, art galleries, music halls and football clubs were formed and played a significant role in the cultural life of Limassol.

The city of Limassol was developed much after the Turkish invasion of 1974, when Famagusta, one of the most touristic areas of Cyprus was captured by the Turkish armies. Luxurious hotels, restaurants and numerous entertainment clubs were built and thus the city soon became a significant touristic centre.

Beaches
A sunlover’s haven, Limassol is blessed with 16 kilometers of beachfront. This long stretch of sandy beaches includes areas with excellent facilities and clear waters that have been awarded with the Blue Flag label (14 beaches). A line of luxurious hotels back much of the seafront ensuring that modern comforts and an abundance of watersports are available.

For more information about Limassol beaches and Coastline, you can view the Beach Guide here.

AKTI OLYMPION BEACH
Akti Olympion Beach is 40 metres wide and about 2 kilometres long.
GOVERNOR’S BEACH
Midway between Larnaca and Limassol is Governor’s Beach.
PISSOURI BEACH – BAY
Pissouri beach – bay, 30 km west of Limassol (midway between Limassol and Paphos).
MELANDA BEACH
Melanda Beach is found near Avdimou.
KOURION BEACH
Kourion Beach is in Episkopi, approximately 17 km from Limassol.
DASOUDI BEACH
Dasoudi Beach is located in the heart of the Limassol tourist area.
LADY’S MILE
Lady’s Mile, located on the west part of Limassol, is an 8km stretch with mostly unspoiled sandy beaches with shallow waters and necessary facilities, suitable for families.
BUTTON BEACH
Further south of Lady’s Mile is an unspoiled area, the Button Beach, where small coastal sand dunes have grown. The Holy Monastery of St. Nicholas of the Cats built in 365 is located nearby.
EPISKOPI AND AVDIMOU
Episkopi and Avdimou are more relaxing settings. Avdimou is sandy and shallow; suitable for children.

CAMPING & EXCURSION
There are a lot of camping and picnic sites in Limassol district:

Troodos Area
TROODOS MOUNTAINS
Trodos is the largest mountain range in Cyprus, located in roughly the center of the island. Troodos highest peak is Mount Olympus at 1,952 meters, which hosts four ski slopes.
Troodos National Forest Park
TROODOS NATIONAL FOREST PARK
The Troodos National Forest Park covers an area of 9,147 hectares around Mount Olympus.
Troodos Waterfalls
TROODOS WATERFALLS
They are situated on the river bed of Kryos Potamos at the Troodos National Forest Park at an altitude of 1330m north of the Pano Platres village.
Parks in Troodos
PARKS IN TROODOS
There is a wide variety of available recreational facilities and activities offered in the parks of Troodos.

Limassol, popular as a ‘sea and sun’ tourist destination is nevertheless a winter trip one should not miss! The weather is as mild as 13°C even at night time, so if you are looking for the ultimate coziness, Limassol should definitely be at the top of your Winter holidays list.

It’s not only more attractive room rates and airfares. Limassol has plenty of options for the traveler all year round. Besides a very rich list of archaeological and cultural sites to visit, one can enjoy vibrant nightlife and gastronomy, the sumptuous atmosphere of a wide selection of wine bars, and a great variety of activities for all ages.

Cycling, hiking, bird watching, horse riding, sailing, air sports (weather permitting), snow skiing (usually between January and March), tennis, spa, shopping … are just a few of the available options. Visitors can explore wine routes in the region considered to be the centre of Cyprus’ wine industry, or byzantine churches routes to become familiar with yet another aspect of Cyprus civilization by discovering churches and monasteries of the former Byzantine Empire. And of course in winter time, one can enjoy a slower pace of life and get a chance to meet the locals and make the trip memorable and special.

During the Christmas period Limassol is home to number of events and fairs, in a more traditional and magical atmosphere where locals and tourists come together in mutual, festive celebrations!