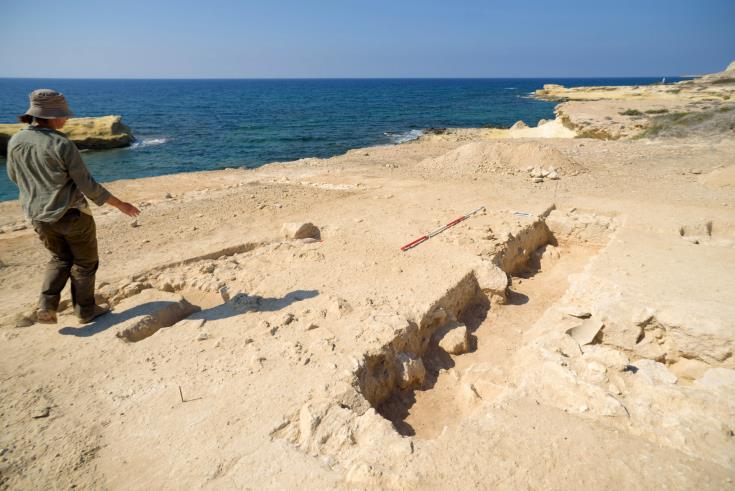 Excavations at Dreamer’s Bay on the southern shores of Akrotiri peninsula suggest the site may constitute one of the best preserved ancient ports in the Mediterranean, the Department of Antiquities said on Thursday.

It was announcing the completion of this season’s excavations on the site within the perimeter of RAK Akrotiri that were carried out under the supervision of Professor Simon James with a team made up of professional archaeologists and undergraduate students at the University of Leicester supported by graduates of the University of Cyprus.

The excavations were carried out with the permission of the Department of Antiquities and the British Bases and the support of RAF Akrotiri, the Defence Infrastructure Organisation and the WSBA Archaeological Society. They were sponsored by the Honor Frost Foundation.

As in the previous three seasons, digs focused on the remains of stone built buildings found near the shoreline as a result of sea erosion and dating back to the Roman and Early Christian period. Indications are that they are the remnants of port installations. This year’s excavations indicate that the buildings along the shoreline are larger and more complex than initially thought. Previous excavations by the University of Buffalo had suggested the port served the acropolis of Curium, about 13 km north.

It still remains to be determined how these buildings are linked with the submerged remains on the beach east of the site, including a masonry breakwater.

The aim of the Ancient Akrotiri Project, that is expected to take five years, is to understand the Dreamer’s Bay port, and place it in the context of the wider peninsula which lay between the major ancient cities of Curum and Amathus.

By In Cyprus
Previous articleInvestigation into arrest of asylum seeker for theft of a ham
Next articleNo ambulances for people weighing more than 181.2 kilos