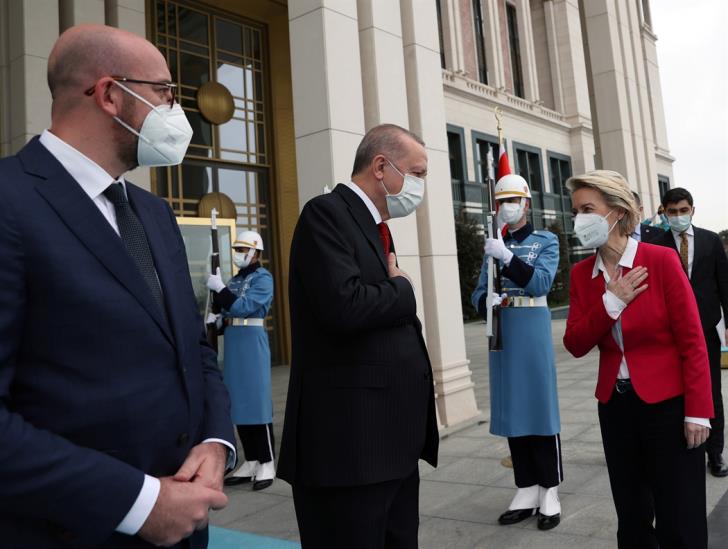 EU’s top officials have tempted Turkey with fresh flow of funding for refugees but they also warned that Ankara must however respect human rights and the rule of law.

They also sent the message that the EU will be present in the upcoming informal summit on the Cyprus problem in Geneva aiming to pave the way for the resumption of reunification talks.

However, Philenews reports that talks between the EU officials and Erdogan on the EU-member divided island were not in depth because of the Turkish President’s  negative stance.

Although, they did warn of sanctions if Ankara restarted provocative energy exploration in waters within the Exclusive Economic Zone of bot Cyprus and Greece.

Tensions flared in August when both Turkish and Greek navy frigates escorted vessels exploring for hydrocarbons there.

Michel said the bloc, which backs Athens and Nicosia, supported the resumption of talks with Ankara over the decades-old dispute.

Turkey is an EU candidate country, and last month the EU also opened the door to begin modernising a customs union to allow unhindered bilateral flows of goods and services.

The EU’s proposal to Turkey is to ensure the flow of funding for refugees that the country hosts, provided that Ankara respects human rights and the rule of law.

Turkey hosts some 4 million refugees, mostly Syrian, and has repeatedly accused the EU of not honouring promises under a 2016 deal under which it was to curb migrant flows to Europe in exchange for financial aid.

In a sign of improving ties after months of tensions, EU leaders agreed last month to providing more money for refugees, as well as beginning work on deeper trade – though they warned of sanctions if Ankara restarted energy exploration in disputed waters.