Europe’s most wanted: The German national wanted by Cyprus 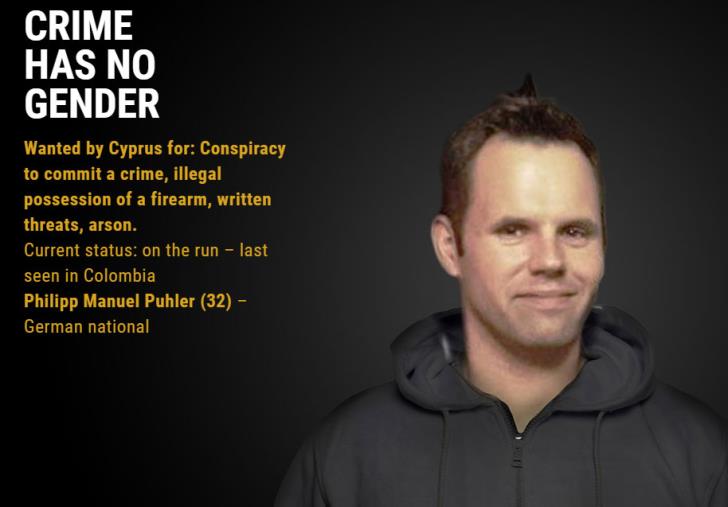 A German national last seen in Colombia but believed to be in hiding in Spain features as Cyprus’ most wanted fugitive on a new campaign launched by Europol today.

Philip Manuel Puhler, 32, is believed to be hiding in Malaga.

He is wanted by Cyprus for: Conspiracy to commit a crime, illegal possession of a firearm, written threat and arson. Letters and emails picturing the family and property of the victim were sent, threatening their lives and property.

A kindergarten owned by the daughter of the victim was burnt down and on two occasions, an explosive was thrown at the victim’s bedroom window. All crimes were committed in July and August 2019 in the greater Larnaca region, the post adds.

Taking part in the campaign — crime has no gender — are 22 EU member states who have selected one of their most wanted fugitives to feature in a ‘masquerade of crime’.

The focus is on the story behind the crime, starting with a full mask covering the face of the fugitive. As the story unfolds, parts of the mask disappear leaving the viewer guessing the gender of the criminal.

The aim is to attract as many visitors to www.eumostwanted.eu/crimehasnogender as possible.

Experience has shown that the more eyes look at the wanted fugitives, the higher the chance is that someone can place the final piece of the puzzle to locate and arrest the wanted person. Information can be sent anonymously via the website, directly to the national investigators looking for the fugitive, Europol added.

This approach has proven successful in the past three years. After every large communication campaign, several wanted fugitives were arrested or turned themselves in because the pressure became too high for them and/or their relatives. Since the launch of the project, 69 criminals who featured on the website have been arrested. In at least 21 cases this was down to information received from the general public via the website.

Europe’s Most Wanted was initiated by the ENFAST community in January 2016 with the full support of Europol. The members of ENFAST are all specialised in locating criminals on the run who are suspected, or have been convicted of serious crimes and are subjects of European Arrest Warrants.

Of the 22 most wanted on the new list all but three are women. Europol notes that female fugitives featured on Europe’s Most Wanted website prove that women are equally as capable of committing serious crimes as men.

“The criminals – of both genders – in this new campaign by EU law enforcement are all wanted for grave offences like murder, drug trafficking, fraud, theft and trafficking in human beings. We are asking for your information to help us track them down and make them take responsibility for their crimes,” it said.

Many studies have examined how gender plays a role in crime. The majority of those looked at the gender of the victim but less often at that of the offender.

However, in recent decades, the number of women engaged in criminal activity has increased, although at a slower pace than men. One of the possible explanations is that technological progress and social norms have liberated women from the home, increasing their participation in the crime market.

Researchers consider it important to investigate female criminal behaviour to determine whether the policy prescriptions to reduce crime should differ for women*. (*Campaniello, N. (2019) ‘Women in crime’, IZA World of Labor, online at https://wol.iza.org/articles/women-in-crime/long accessed 4 October 2019.)

A 68 year old man with coronavirus had died, the Health Ministry said on Saturday as it also announced no new positive cases for...
Read more
Local

Larnaca Airport reopens on Tuesday with five arrivals and five departures to and from Athens, Sofia and Tel Aviv as Cyprus takes a further...
Read more