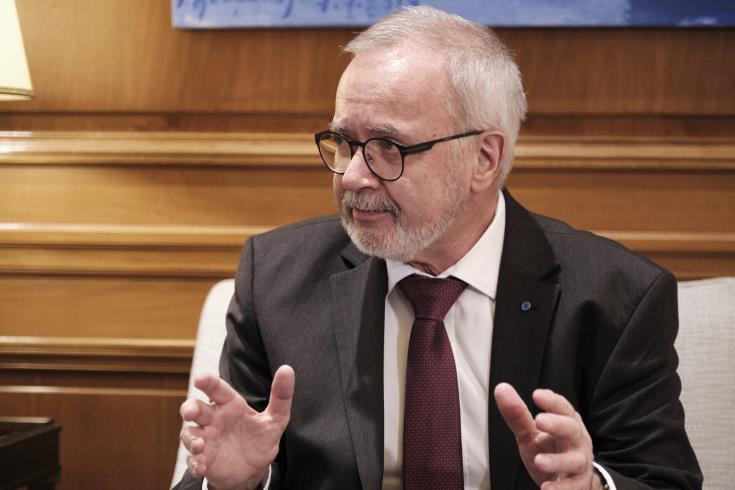 President of the European Investment Bank Werner Hoyer on Monday will meet in Nicosia Cypriot officials to discuss new ways to support the economy during the challenging conditions created by the covid-19 pandemic.

During his visit, President Hoyer will also set out the impact of the EIB Group’s financing in Cyprus, according to a press release of EIB communication office.

Hoyer is due to meet President Nicos Anastasiades at the Presidential Palace in the morning, followed by talks with the Ministers of Foreign Affairs Nikos Christodoulides, Energy Natasa Pilides, as well as Finance Minister Constantinos Petrides, who is also the Cypriot governor of the EIB.

The EIB President will thank President Anastasiades and Minister Petrides for Cyprus’s strong support for the European Investment Bank’s immediate response to covid-19 across Europe, the press release says

It adds that President Hoyer will provide an update on how the EIB can efficiently and effectively support Cyprus and Cypriot businesses during the challenging economic conditions created by the coronavirus pandemic and the bank’s ongoing efforts to provide transformational investment on the island.

According to the press release, the European Union’s bank is pleased with the confidence shown by the Cypriot government in the EIB’s support this June, when the authorities adopted measures to help local businesses and protect jobs.

EIB support includes Cyprus’s participation in the €25 bln Pan-European Guarantee Fund (EGF) to help companies that are struggling through the current crisis, forming a bridge to the recovery, as well as financial support intermediated through financial institutions.

Last year the EIB Group provided €230 million for new investment in Cyprus, making the country the leading beneficiary of EIB investment on a per capita basis. The projects agreed included renewable energy schemes and loans via local banks to support small-size investments in the private sector.

So far this year the EIB has approved €500 mln in financing for Cyprus – an amount that is set to rise before the end of the year.

The press release says that most recently, the EIB Board of Directors approved on September 2 financing of €200 mln euros to support local SMEs and MidCaps through the Cyprus Entrepreneurship Fund.

It adds that as the EU climate bank, the EIB is committed to supporting the energy transition and increasing generation of clean energy in Cyprus and the rest of Europe. The bank have recently supported the development of renewable energies in Cyprus with local partners and to be financing projects that help reduce CO2 emissions.

As part of its energy lending policy, the EIB will end financing for fossil fuel energy projects from the end of 2021.

The European Investment Bank has provided more than €4 billion for investment in Cyprus since the first EIB operations were agreed 37 years ago, it is stated.

Over the last six years, since the financial crisis, the EIB has agreed more than €1.7 billion of new education, energy, shipping, water and private sector investment.

The European Investment Bank (EIB) is the long-term lending institution of the European Union owned by its Member States. It makes long-term finance available for sound investment in order to contribute towards EU policy goals.