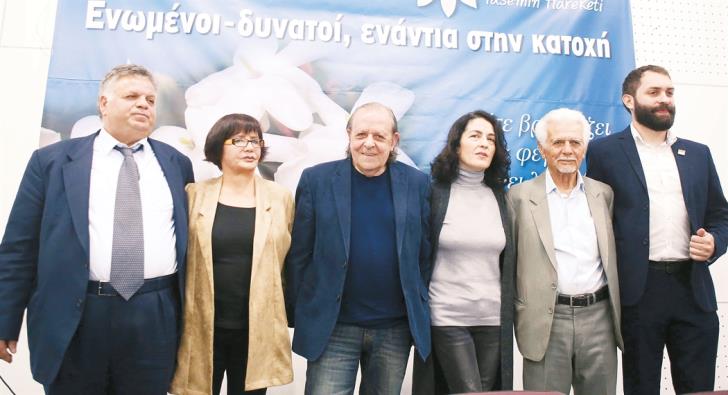 European elections hopefuls, whether running under the banner of parliamentary parties, newly founded movements or as independents, submitted their candidacies, on Friday seeking to attract enough votes on May 26 to be elected as a Member of the European Parliament.

“We vote for Europe and we move forward,” DISY President Averof Neofytou said, immediately after six hopefuls for the position of MEP submitted their candidacies. Neofytou spoke of a ballot which combines experience, renewal and wider social acceptance and called on voters to trust his party which as he reminded is a member of the most powerful political group at European Parliament level. DISY’s candidates are Georgia Constantinou-Panayiotou, Panayiotis Sentonas, Eleni Stavrou, Nicos Tornaritis, Loukas Fourlas and Lefteris Christoforou.

AKEL Secretary General Andros Kyprianou called on voters to send a message for a change of course and to send a message of disapproval to the government. He said he was proud of the work achieved by AKEL MEPs in the last five years, which is the most active group at the European Parliament. The six candidates of AKEL are Giorgos Georgiou, Athos Georgiou, Niyazi Kızılyürek, Giorgos Koukoumas, Marina Nicolaou and Neoklis Sylikiotis.

We seek the best for Cyprus in Europe DIKO President Nicolas Papadopoulos said, on his part, adding that the Democratic Party seeks citizens vote to continue to play its role and spoke of a more democratic Europe based on cooperation, social cohesion and solidarity. DIKO candidates are Aristos Vasiliadis, Eleni Theocharous, Zaharias Koulias, Costas Mavrides, Marinos Mousioutas and Katerina Christofidou

Citizens Alliance movement and the Greens – Citizens Cooperation have joined forces and are seeking to elect one MEP, their Presidents Yiorgos Lillikas and Giorgos Perdikis said on their part, stating that their ambition is for citizens to have a voice at European Parliament level. The six candidates of the joint ballot are Andreas Themistocleous, Charalampos Theopemptou, Efi Xanthou, Maria Pastella, Alexia Sakadaki and Doros Christodoulides.

ELAM President Christos Christou said that after May 26th the political landscape will change, adding that nationalist parties will form one large European group and that ELAM wishes to be part of it to represent Cyprus’ interest. The six ELAM candidates are Marios Vasiliou, Geadis Geadi, Maria Ierodiaconou, Giorgos Nicolaou, Panayiotis Tofinis and Georgios Solomonides.

President of Democratic Alliance Marios Garoyian said that the newly founded party would seek for the true political center to be represented both in the Cypriot and the European pollical arena. The party’s candidates are Eleftherios Demetriou, Vakis Iacovou, Michalis ioannou, Yiannos Lakkotrypis, Marinos Cleanthous and Antigoni Papadopoulou.

President of the also newly founded Patriotic Movement Christos Rotsas said that Cyprus needs a new beginning and called on all Greeks of Cyprus to get up from the couch and vote.  The six candidates are Chryselpida Kamma, Nicos Kimonos, Christos Papouis, Nicolas Peratikos, Christos Rotsas and Christos Charalambous.

The time has come to make not just a political but also a social choice President of the Cyprus Party for Animals Kyriakos Kyriakou said. The six candidates are Angela Agathangelou, Avraam Themistocleous, Kyriacos Kyriacou, Michelle Metzidis and Neophytos Neophytou.

Loucas Stavrou, speaking on behalf of the Nationalist Liberation Movement (EAK) said that the movement will be a lance of fire against the attempt to commit treason against the country. The six candidates are Maria Kalogeri, Christakis Kapiliotis, Panayiotis Cleovoulou, Antonis Pierides, Loucas Stavrou and Michael Christodoulou.

Turkish Cypriot Mehmet Birinci, on behalf of the Cyprus Socialist Party, called on workers to send a message against imperialism and the political establishment. Birinci is a candidate together with Kazim Halit.

President of the Union of Fighters for Justice Michael Mina spoke in favour of an immediate solution to the Cyprus problem. Mina is a candidate together with Leoni Paraskevaidou.