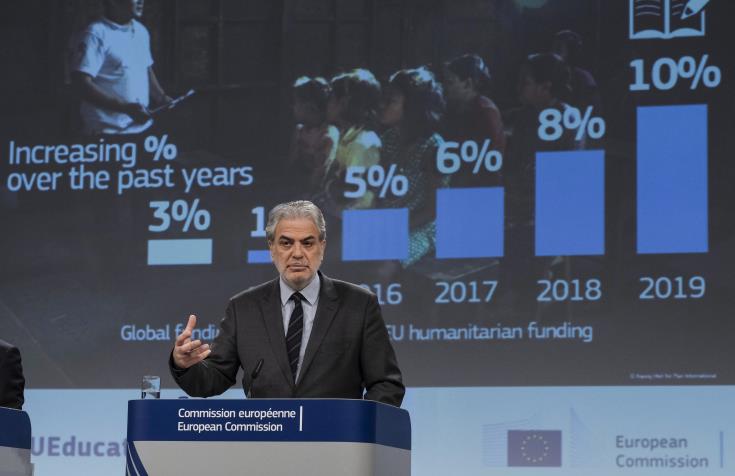 Europe is the world’s  largest donor of humanitarian aid, offering relief assistance to millions of people in need around the world as a result of conflicts or natural disasters.

EU Commissioner for Humanitarian Aid and Crisis Management Christos Stylianides has said that European citizens should feel proud of the work that is being done.

The Commissioner was speaking to Cypriot journalists who participate in a joint press seminar in Brussels on the Future of Europe and European Elections 2019 organised by the European Parliament’s Office in Nicosia and the European Commision’s Representation in Nicosia.

Stylianides said that the annual budget for humanitarian aid is two billion euro but this can be increased according to the needs.

As regards the refugee crisis, he said that indeed influx of immigrants has increased in Cyprus and said that the EU is ready to help this Mediterranean island to tackle the issue.

He referred to the EU – Turkey agreement for addressing the refugee crisis due to the war in Syria and said that it is a very important agreement, expressing the view that Greece and Cyprus benefit the most from this agreement.

The most important challenge in the future as regards humanitarian crisis and development aid would be Africa, he said, noting that projections estimate that the population in the continent would jump to 2,5 billion in 2050 compared to 1,4 billion today.

The meeting with the journalists took place in the European Emergency Response Coordination Centre, based in Brussels which coordinates assistance in the framework of the EU`s Civil Protection Mechanism. The mechanism is currently based on a voluntary system, through which the EU coordinates the voluntary contributions of participating states to a country that has requested assistance.

In addition, the European Commission has taken another important step: the adoption of rescEU, which is a proposal by Commissioner Stylianides to upgrade the existing European civil protection system in order to cope with the increased natural disasters due to climate change.