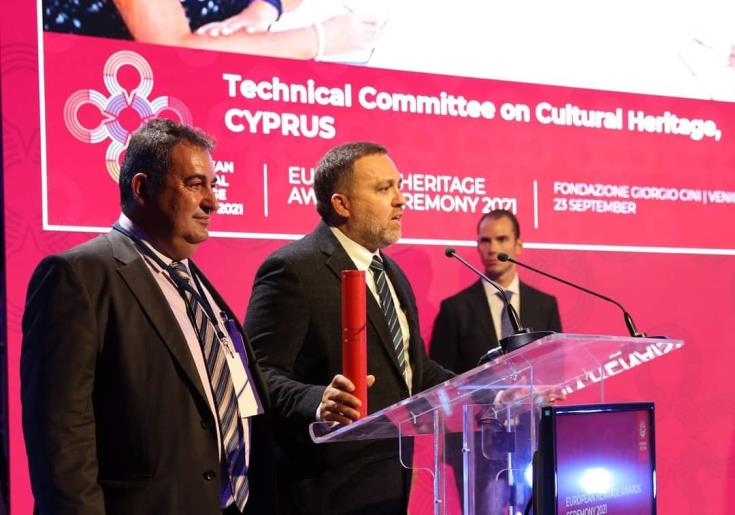 The bicommunal Technical Committee on Cultural Heritage in divided Cyprus has won a Grand Prix Award at the 2021 European Heritage Awards/Europa Nostra Awards.

The ceremony took place earlier in the week in Venice in the framework of the European Summit on Cultural Heritage.

Ali Tuncay and Sotos Ktoris received the award on behalf of the Technical Committee.

The Greek Cypriot Head of the Committee, Takis Hadjidemetriou, told CNA that Cyprus people are the recipient of the award because of their sensitivity on the island’s cultural heritage and their support to the role and work of the Committee.

He said that the Committee was awarded for the immense work it has carried out, the cooperation between Greek Cypriots and Turkish Cypriots and the huge dedication in the preserve of monuments on the island.

Hadjidemetriou said that the Committee was praised for the fact that people from different religious backgrounds can cooperate and their projects could have an international significance and be well received from the world.

There were 24 shortlisted projects coming from 18 countries and among these the four winners were:

The Wooden Church of Urși Village, Vâlcea County (Romania), a beautiful 18th century wooden church that was exemplary restored using traditional materials and techniques in a collaborative way, allowing for the exchange of ideas and knowledge amongst international participants. This project won both the Conservation Category Award and the Public Choice Award.

FIBRANET – FIBRes in ANcient European Textiles (Denmark / Greece), an innovative research project that provides new knowledge about the degradation of ancient fibres, informing both archaeological practice and providing crucial knowledge for Europeans as we look for solutions for dealing with the waste produced by the fashion and textile industries. FIBRANET won the Research Category.

The Technical Committee on Cultural Heritage (Cyprus), established in 2008 by the Greek Cypriot and Turkish Cypriot leaders under the auspices of the United Nations, who has successfully restored over 70 monuments, using cultural heritage as a powerful tool for reconciliation and peaceful cooperation.

The Technical Committee topped the Dedicated Service to Heritage by Organisations & Individuals Category and the Invention of a Guilty Party, Trento (Italy), an exemplary exhibition that shows the relevance of a historical case of anti-Semitism to contemporary conversations around discrimination and intolerance in today’s Europe, stimulating critical reflection on the power of propaganda and fake news. The Category here was Education, Training and Awareness-raising.

In a message David Sassoli, President of the European Parliament said that each of the winners has contributed to the protection, preservation and promotion of Europe’s rich cultural heritage.

The Technical Committee has carried out more than 70 projects across the island including the Apostolos Andreas Monastery, Othellos Walls, byzantine churches, mosques and aqueducts.

Hadjidemetriou also said that work is underway at the Salamina mosaics, the Church of Panagia Kyra, Agios Georgios in Vatyli, Agia Marina and Acheritou.

Panagia Kyra used to be a monastery church and is one of the most important monuments in Cyprus, equivalent to  Panagia Angeloktisti Church. Its arch and dome are of the first and middle byzantine eras.

Soon works will commence at the Agios Sergios and Vackhos, another church of the byzantine era.

Cyprus is divided since 1974 following an invasion by Turkey which still maintains troops in the northern part of the EU member island.