EU programme to protect Bonelli eagle in Cyprus and Greece 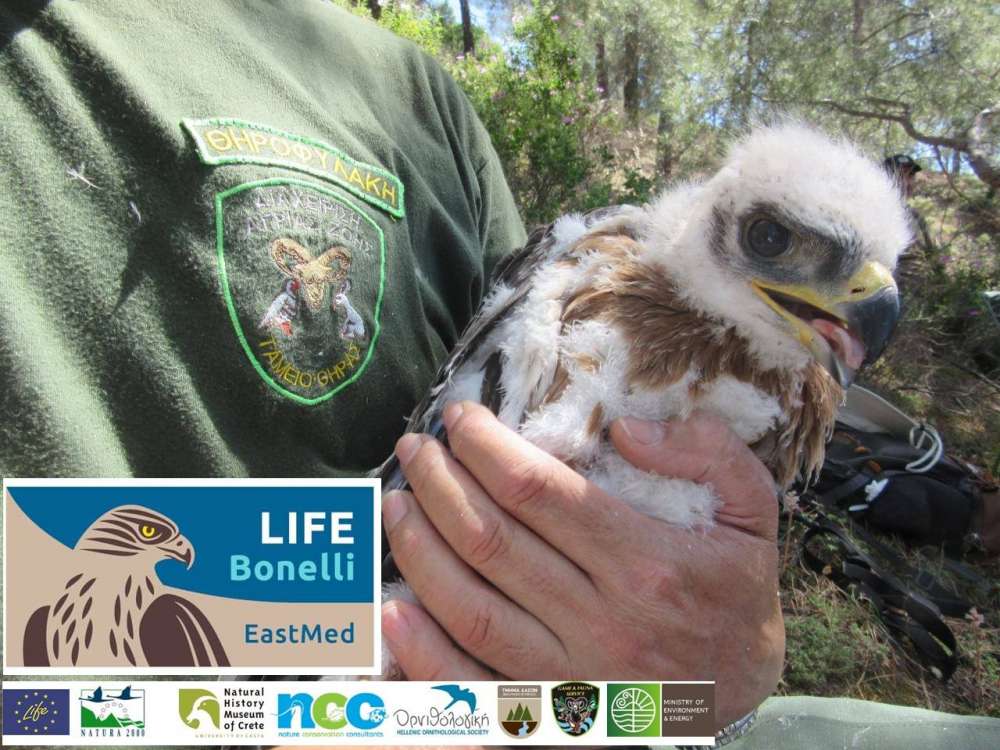 The Game Service has shared a photo on its Facebook page of a young Bonelli eagle which has just been ringed and fitted with a tracking device under the EU funded Life programme LIFE Bonelli EastMed LIFE 17.

The Game Service is participating in the programme together with the Cyprus Forestry Department, the Natural History Museum of the University of Crete, Greece’s Ornithological Society, Nature Conservation Consultants and Greece’s Environment Ministry.

The LIFE programme is one of the most important financing means for the environment and aims to promote implementation of the EU’s environment policy and legislation with the ultimate aim of achieving sustainable development.

As part of the programme, birds are being fitted with transmitters while other protective measures are also being implemented, the Game Service said.

In Cyprus, the programme is being implemented in the Troodos Forest, in Paphos Forest, in the Papoutsa area and in the Pentaschino area.

Bonelli’s eagle is a priority species of the Birds Directive (Annex  I) and is the subject of an International Species Action Plan. Its conservation within Natura 2000 network sites and in the wider countryside is also among the priorities of the EU Biodiversity Strategy, and National Biodiversity Strategies in Greece and Cyprus.

In Greece, two LIFE projects have targeted the species. In Cyprus, though there have not been specific conservation efforts, the species has benefited from the control of persecution and the establishment of vulture feeding stations.

Nevertheless, in both countries, many threats remain that need to be addressed, along with knowledge gaps that prevent the spatial assessment of mortality causes and regional population dynamics.

Meanwhile, nature management authorities in the eastern Mediterranean have limited technical and operational capacity to manage the species, according to the description of the €4,235,584 programme that will run from 2018 to 2023.

Specific project objectives include:
Filling current knowledge gaps, especially the lack of telemetry data that prevents a spatial assessment of mortality and population dynamics;  Reducing direct mortality inside breeding areas in Natura 2000 sites (SPAs) in Greece and Cyprus; Improving the species’ reproduction success by foraging habitat management and reducing human disturbance; Improving the technical and operational capacity of nature authorities and other stakeholders, so that they can more effectively manage the species’ populations; Improving the awareness of stakeholders and specific target groups for the sustainable conservation of the species; and Planning and implementing an effective transferability and replicability strategy for EMBoNet.

Expected results:
*  Improved conservation status of over 40% of the Greek and Cypriot Bonelli’s eagle populations, which constitute over 30% of the eastern Mediterranean population and over 5% of the European population;
* Indirect benefits to the entire eastern Mediterranean population through species surveys, conservation planning, networking and capacity building actions;
* Establishment of the East Mediterranean Bonelli’s Eagle Network (EMBoNet) to coordinate conservation efforts for the species;
* Information gathered from the tagging of 80-100 Bonelli’s eagle individuals to fill knowledge gaps, including data for assessing the risks from planned expansions of electricity grids and wind farms;
* Collection and update of baseline information on Bonelli’s eagle and associated threats, followed by a 25% reduction in direct mortality in 50 breeding territories and dispersal areas through the insulation of 300 pylons, the marking of at least 16 km of power lines, construction of anti-drowning modifications in at least 62
open water tanks, and the creation of three anti-poison canine teams;
* Regulation of human disturbance in 30 nesting sites through nest surveillance, road closure, regulation of climbing activities, and designation or expansion of boundaries of at least six wildlife reserves;
* Increased prey availability in breeding territories through cultivations of around 600 ha, construction/repair of at least 173 watering structures, creation of at least 20 ha of forest and 5 ha of shrub openings, and regulation of hunting in at least three sites;
* Ensured continuity of project conservation actions by engagement with at least 30 stakeholders, with five replications or transfer of methods during the project’s duration;
* Involvement and training of employees of nature authorities, other stakeholders and volunteers in conservation actions and Natura 2000 site management;
* Changed behaviour of climbers, hikers, hunters, and other site users by at least 20%