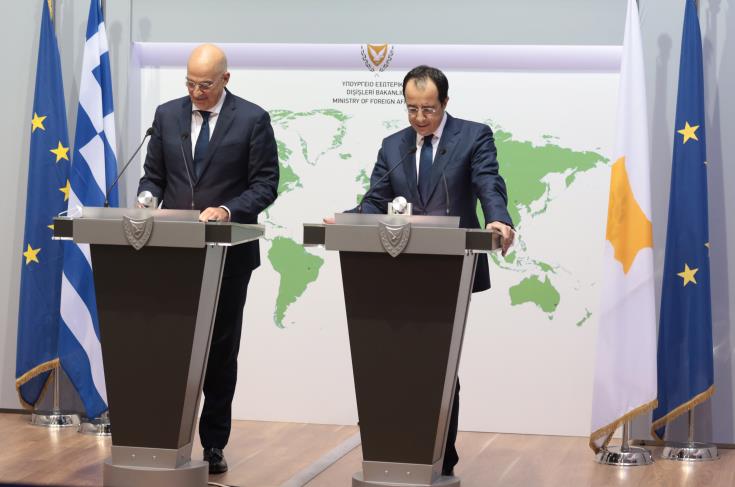 The delayed moves which Turkey made some days ago to purportedly achieve de-escalation are not convincing, Greek Foreign Minister Nikos Dendias said on Friday, noting that for this reason, Greece and Cyprus have jointly called on the rest EU member states to undertake their responsibilities.

“We need to take those decisions that will lead Turkey towards real de-escalation and to a constructive dialogue on the only basis which we can accept. This basis is the International Law and the Law of the Sea,” Dendias underlined, in statements after talks he had in Nicosia with his Cypriot counterpart, Nikos Christodoulides, in the framework of the regular contacts and the continuous coordination between Nicosia and Athens.

The Greek FM also said that “these decisions are important not only as a clear sign towards Turkey but also as a proof of the EU reliability.”

On his part, Christodoulides said that “it is clear that the ball is now in Turkey`s court, any decisions are dependent on Ankara`s behaviour, and after evaluating her behaviour, as they agreed to do so in October, the EU leaders will take the relevant decisions.”

He underlined that “in the EU we need to be consistent, decisive and reliable, claiming at the same time a leading role in issues which have to do with the sovereignty and the sovereign rights of member states, something which undoubtedly affects the European interests.”

In his statements, Dendias said that his visit to Nicosia takes place during a really crucial moment both for Hellenism and Europe in general.

He said that the common denominator is the provocative Turkish behaviour, noting that with her actions in the broader region, Turkey negatively affects peace, security and stability. She is trying on one hand to create a fait accompli and on the other to prevent measures against her, he added.

Referring to his meeting earlier today with Cyprus President, Nicos Anastasiades, Dendias said that he briefed him about the initiatives taken in view of the European Council, both by the Greek Prime Minister, Kyriakos Mitsotakis, and him.

Dendias said that with his Cypriot counterpart they focused on the forthcoming discussions at the EU Foreign Affairs Council and looked into the EU-Turkey relations.

He noted that the European Council that took place in October gave Turkey the opportunity to de-escalate its actions in the Eastern Mediterranean and the broader region “with a view to be able to create a positive agenda vis-a-vis Turkey.”

Dendias said that unfortunately Turkey made the exactly opposite thing and issued within a period of some weeks six illegal NAVTEX for seismic research in an area of the Greek continental shelf in the Eastern Mediterranean.

Moreover, he added, Ankara acted absolutely provocatively with the so called picnic of Turkish President Recep Tayyip Erdogan in Varosha and issued an illegal NAVTEX for research within a sea area that includes the Cypriot EEZ.

Referring to the Cyprus problem, he noted that it continues to be a top priority of the Greek goreign policy, adding that during the recent visit of the UNSG`s Special Envoy Jane Holl Lute to Athens, “it was underlined to her that Greece is ready to participate in the informal five party meeting that the UNSG will convene.”

We also stated that we are ready to respond to the resumption of the negotiating process, from the point it was suspenced in Crans Montana, in July 2017, and on the basis of what was agreed in Berlin, in November 2019 between President Nicos Anastasiades and the then Turkish Cypriot leader, Mustafa Akinci, he added.

Moreover he said that they reiterated to Lute in the most clear way that they condemn the Turkish unilateral activities in Varosha, which violate in the most blatant way the UN Security Council decisions.

Dendias said that they also underlined once again that a comprehensive, just and viable settlement of the Cyprus problem must be found, “but this can only be done on the basis of the Security Council decisions and of the EU acquis.”

On his part, Christodoulides said that they discussed about all developments, they assessed the results of discussions with Lute and they exchanged views about the next steps “so that on our part we will do our utmost so that the SG`s initiative will have a positive outcome.”

Moreover, he said that they discussed about the revisionist behavour of Turkey in the broader region, which is on the agenda of the European Council next week in Brussels.

As regards the Cyprus problem, he noted that “we expressed our readiness for the resumption of the talks from the point they were suspended in Crans Montana as it was clearly expressed to Lute, and we really hope that the UNSG will soon convene an informal conference on Cyprus, that will pave the way for the resumption of substantive talks in the framework of the SG`s mandate, as it is clearly determined by the Security Council and with the aim of achieving a settlement providing for a bizonal, bicommunal federation.”

He noted the need for the talks to take place in a conducive climate as the UNSG is asking, away from efforts to create a fait accompli, either on the ground as in the case of the fenced off city of Famagusta, or at the sea, with Turkey`s illegal activities.

Moreover he said that public statements both by Turkey and the Turkish Cypriot leader, Ersin Tatar, about the need to change the pursued goal are outside the agreed and internationally accepted framework and cannot be accepted in any case.

He said that the role of the EU, of which the Republic of Cyprus is a member state, towards this direction is and will continue to be decisive and after a Cyprus settlement.

Christodoulides said that  the EU heads of state and government will review during the European Council that will take place next week Turkeys` behaviour in the broader region and not only there, and are expected to take decisions about the whole spectrum of the EU – Turkey relations.

He recalled that in the beginning of October the EU heads of state and government expressed in their conclusions their readiness for a positive approach towards the EU-Turkey relations under the conditions, among others, that Turkey will terminate its illegal activities in the Eastern Mediterranean and will work constructively for the resumption of substantive talks on the Cyprus problem in the famework of  the SG`s good offices, and will also terminate any illegal activities which violate the UN decisions, with special reference to resolutions 550 and 789 which have to do with the fenced-off area of  Varosha.

Christodouldies said that the next period of time is of decisive importance as to how things will evolve both as regards prospects for the resumption of the talks on the Cyprus problem and the furute of the EU relations with Turkey.

He noted that at this crucial juncture, Cyprus and Greece as well as the vast majority of EU member states have common approaches which aim at reinforcing security, stability and cooperation in the Eastern Mediterranean region, which is particularly important for the EU.

Responding to questions, Christodoulides said that the mandate for the talks on the Cyprus problem is determined by the UN Security Council and is binding for everyone engaged in the process for a Cyrpus settlement.

He did not rule out that Lute may return to the region, noting that it is the UNSG which will decide if he will convene the informal conference on Cyprus, after he is informed by Lute.

By gavriella
Previous articleClarifications about COVID-19 cases in Central Prisons.
Next articleYellow warning about thunderstorms as of tonight