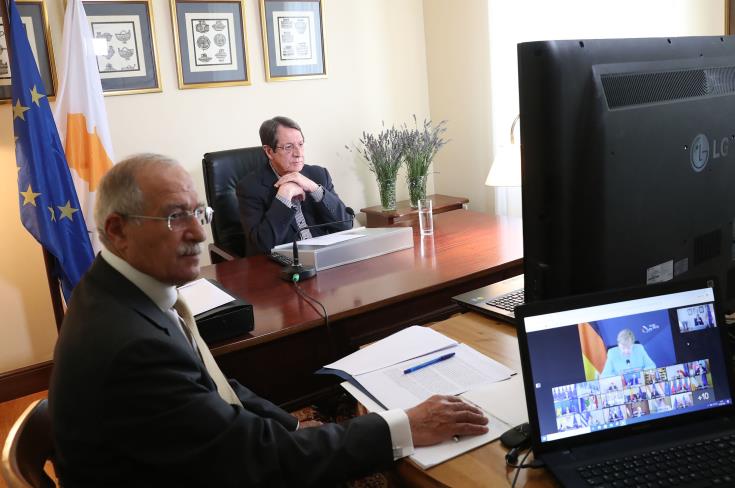 The EU must not have double standards Cyprus’ President Nicos Anastasiades said in an intervention on Wednesday during the extraordinary European Council meeting that took place via teleconference.

More specifically, President Anastasiades welcomed the approach and the immediate reaction of the EU as regards the situation in Belarus, underlining that “I expect, however, that the EU will follow the same strong and decisive approach for third countries which violate the international law”.

He added that the EU must not have double standards.

President of the European Council Charles Michel called for an extraordinary European Council meeting to review the ongoing situation in Belarus, after the presidential elections in the country on August 9.

According to a press release circulated by the PIO, Anastasiades said, inter alia, in his intervention that the EU must be present whenever the democratic principles, the rule of law, the human rights and the international law are violated, and not by choice or on the basis of the interests of members states, noting that Cyprus has for years now been experiencing the violation of human rights and basic principles by Turkey.

He also noted that the violation of human rights and basic principles by Turkey, a state which is candidate for EU membership, on its own territory and against its own people, by silencing the press and the freedom of the press, jailing public sector officers and thousands of other blatant violations of human rights.

Anastasiades also referred to the ongoing violation of the Republic of Cyprus sovereign rights by Turkey as well as Ankara`s illegal and provocative actions in the maritime zones of Cyprus and Greece.

He underlined that the EU has the responsibility to react to these serious provocations against peace and stability in the Eastern Mediterranean, noting that the escalation of the Turkish offensive policy as demonstrated now as well, will not be reversed through a lukewarm reaction by the EU.

Charles Michel has called for an extraordinary meeting of the European Council on September 24-25 to discuss the situation in the Eastern Mediterranean and the Turkish provocations.