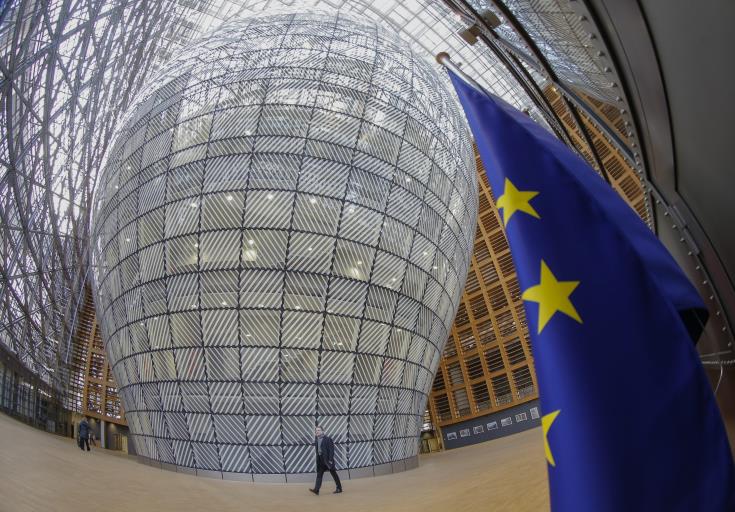 EU leaders gather again in Brussels to agree on nominations for the European Commission, the Council and the ECB Presidency, adopt the strategic agenda of the EU for the next five years and review the deepening of the EMU.

A condemnation of Turkey’s illegal actions in the EEZ of Cyprus is also foreseen.

The European Council will start on Thursday at 15.00 with the traditional exchange of views with the President of the European Parliament.

At the first working session (15:30) on Thursday afternoon heads of state or governments will discuss and adopt conclusions on the EU’s long-term budget (Multi-annual Financial Framework – MFF), the European Semester, climate change, disinformation and hybrid threats as well as external relations, including on Ukraine/Russia and Turkey’s illegal drillings in Cypriot waters. Leaders are also expected to adopt the new Strategic Agenda for 2019-2024.

Also, in this first working session, the Romanian President, Klaus Iohannis, of the current rotating presidency of the Council, will provide a state of play on the implementation of previous European Council conclusions.

On Friday morning, starting at 09.30, the EU27 leaders will meet for a Euro Summit, in inclusive format. The leaders are expected to endorse the progress made by the Eurogroup in reforming the Economic and Monetary Union (EMU).

At the end of the meeting Presidents Tusk and Juncker will informally update the leaders on the latest developments with regard to Brexit, including on the EU preparedness for a `no deal` scenario.

Turkey will be discussed under the external relations part of the first working session (15:30 -19:00)

The heads of state or government will discuss Turkey’s current illegal drilling activities in the Eastern Mediterranean. President Anastasiades will update the leaders on the latest developments and the European Council is expected to lend its full support to Cyprus and call on Turkey to show restraint, respect the sovereign rights of Cyprus and refrain from any such actions.

The European Council will discuss latest developments and the situation in eastern Ukraine and the Azov Sea. It will also be an occasion to mark five years since the downing of flight MH17, which claimed 298 lives. Leaders are expected to call on Russia to release the captured Ukrainian sailors and ensure free passage through the Kerch Straits. They are also expected to express their utmost concern about Russia`s issuing of passports in Ukraine’s Donetsk and Luhansk regions, which runs counter to the spirit and objectives of the Minsk agreements.

Chancellor Merkel and President Macron will brief the leaders on the overall implementation of the Minsk agreement and the negotiations in the Normandy format. This will be the occasion for the leaders to endorse a roll- over of economic sanctions on Russia.

The European Council is also expected to discuss and adopt conclusions on the occasion of the 10th anniversary of the Eastern Partnership, the EU`s strategic partnership with Africa and the renewed impetus in EU-Morocco relations.

As part of the EU`s institutional renewal, the heads of state or government will discuss and adopt the EU’s Strategic Agenda for the next five years (2019-2024). The aim of the strategic agenda is to set out the main priorities for the EU, which will guide its work in the next institutional cycle. It will be used to plan the work of the European Council, and form the basis for the work programmes of the other EU institutions. The new strategic agenda focuses on four main priorities:

– protecting citizens and freedoms
– developing a strong and vibrant economic base
– building a climate-neutral, green, fair and social Europe
– promoting European interests and values on the global stage.

Lastly, it sets out how to deliver on those priorities. At the informal meeting in Sibiu, Romania, on  May 9, leaders started their discussions on the future direction for Europe, taking into account the more challenging, unsettled and volatile external environment.

The European Council will discuss progress achieved under the Romanian presidency on the next EU long-term budget, the 2021-2027 Multi-annual Financial Framework (MFF). The discussion is expected to focus on providing guidelines for the incoming Finnish presidency and agreeing on a timeline for the remaining work.

Leaders will discuss the EU’s global climate action, including the mobilisation of international climate finance, in view of the United Nations Secretary General’s Climate Action Summit in September. It will also be an opportunity for the European Council to give guidance on the next steps in the EU’s internal work on a transition to a climate-neutral EU, in line with the Paris Agreement.

Before the European Parliament elections, the European Council called for further efforts to protect the European and national elections across the EU. Based on a report by the Romanian presidency and contributions from the High Representative and the Commission, the heads of state or government are expected to call for sustained efforts to raise awareness, increase preparedness and strengthen resilience to disinformation.

Leaders will also welcome the adoption of a new framework for targeted restrictive measures to respond to cyber-attacks, as requested by the European Council in June 2018. They should further emphasise the need to enhance resilience and improve the security culture of the EU institutions against cyber and hybrid threats from outside the EU.

The European Council is expected to discuss the 2019 European Semester on the basis of a horizontal report on Country–Specific Recommendations.

The Euro summit on Friday will be held in an inclusive format (EU27) and leaders are expected to discuss and endorse the progress made by the Eurogroup on the reform of the Economic and Monetary Union (EMU). In particular, leaders are expected to focus their discussions on defining the appropriate sources of financing and the amount for the budgetary instrument. They are expected to mandate ministers to continue work and report back by December. Leaders will also have a debate on the economic outlook for Europe. Both European Central Bank President Draghi and Eurogroup President Centeno will be present for the debate.

At their meeting on June 13, Eurogroup ministers agreed on a term sheet describing features of the budgetary instrument for competitiveness and convergence. Ministers also reached a broad agreement on revising the European Stability Mechanism (ESM) treaty text to implement the political agreement reached at the Euro summit in December 2018. T

his agreement covers issues such as the common backstop for bank resolution, the precautionary instruments as well as institutional aspects and the issue of cooperation between the ESM and the European Commission within and outside programmes.

At the European Council (Art 50) meeting on April 12, 2019 the EU27 agreed to revert to the issue of Brexit at their next meeting in June. This will take the form of a short informal update of the situation, including on the EU preparedness for a ‘no deal’ scenario, by Presidents Tusk and Juncker.