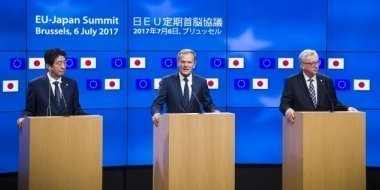 The Economic Partnership Agreement (EPA) between the EU and Japan enters into force tomorrow, creating the largest open trade zone in the world.

“Europe and Japan are sending a message to the world about the future of open and fair trade. We are opening a new marketplace home to 635 million people and almost a third of the world’s Gross Domestic Product, bringing the people of Europe and Japan closer together than ever before. More than anything, our agreement shows that trade is about more than quotas and tariffs, or millions and billions. It is about values, principles and fairness, ” said European Commission president Jean-Claude Juncker.

Added Trade Commissioner Cecilia Malmstrom: “This agreement has it all: it scraps tariffs and contributes to the global rulebook, whilst at the same time demonstrating to the world that we both remain convinced by the benefits of open trade. Our manufacturers, our service providers, our tech start-ups and our farmers all have something to celebrate in this agreement. I am also proud that we have locked in our Paris climate deal commitments into a trade agreement for the first time, as well as setting high standards for workers’ rights and consumer protection.”

Cyprus exports to Japan are valued at €1m and imports at €66m.

By In Cyprus
Previous articleIndustrial output up by 2.2% annually in 2018
Next articleForeign workers a majority in private sector of occupied north – TC media