EU issues fiscal and macroeconomic guidelines for Turkey, warning about the economy 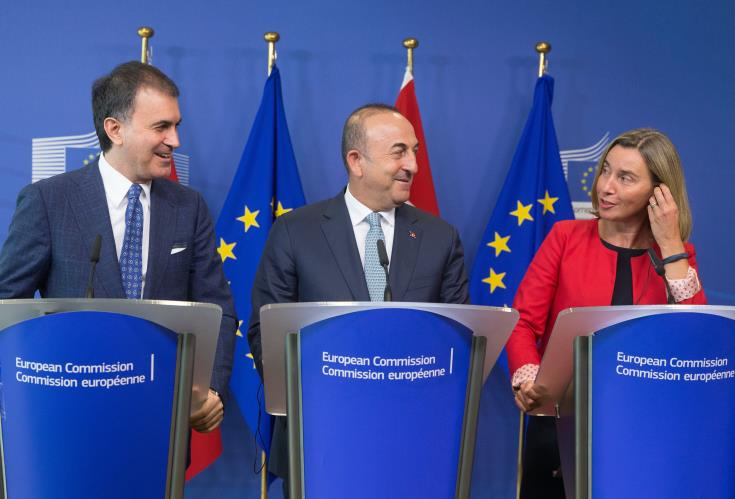 Turkey is confronted with a number of challenges to growth and competitiveness, EU Member States warn, in the “draft Joint Conclusions of the Economic and Financial Dialogue between the EU and the Western Balkans and Turkey”, published today by the Council.

The Conclusions also say that although the economy has declined in the past decade, “the informal economy is still sizeable, but, “more efforts taken to fight against corruption will have a positive impact on the business environment.”

Representatives of the EU Member States, the Western Balkans and Turkey, the European Commission and the European Central Bank, as well as representatives of the central banks of the Western Balkans and Turkey met for their annual economic policy dialogue and discussed the medium-term macroeconomic and fiscal framework as well as structural reforms (affecting areas such as labor markets and education, energy, innovation and the business environment) to enhance competitiveness and long-term growth.

Participants took note of the European Council Conclusions of 23 March, which confirmed that enlargement will be addressed by the Council in June 2018. The dialogue on economic governance with the Western Balkans and Turkey is meant to prepare them for their future participation in the EU economic policy coordination. Ownership is key to achieve the results envisioned in the Economic Reform Program and the below jointly agreed policy guidance. The dialogue reflects to some extent the European Semester process at EU level.

Participants recalled the commitment to set out a new set of targeted policy guidance to support efforts towards fulfilling the Copenhagen economic criteria. In this context, Participants agreed that the elements of the 2017 policy guidance which had not yet been fully implemented remained valid and needed to be addressed by policymakers in the Western Balkans and Turkey.

According to the draft text Turkey’s current institutional capacity and resources spent on R&D and the level of commercialization of innovation are insufficient to enable its planned transformation process to higher added value production. However, progress has been made in recent years as Turkey implemented some major reforms such as R&D reform package and Intellectual Property Law. Turkey faces substantial labour market challenges, reflected in low participation and employment rates, high numbers of inactive youth, high level of informal work and low qualification level of the workforce. Employment creation support has been strongly expanded.However, targeted support to groups most in need such as youth and women needs to be intensified.

Participants welcome that in 2017 Turkey transmitted all relevant annual national accounts data series in current prices and chain-linked volume and the overall high level of data submission in many domains. Participants encourage the regular transmission of annual government deficit and debt statistics and welcome that, since April 2017, Turkey has started to re- transmit EDP notification data tables based on ESA 2010 concepts. Completeness of the tables is good, while efforts are still needed in identified areas. Further effort is also needed in order to complete the related questionnaire.

In light of this assessment, Participants hereby invite Turkey to:

1. Lower external imbalances in light of high external funding needs constituting a substantial risk for the Turkish economy. Promote domestic savings by incentivizing higher private sector savings and by following a sufficiently tight fiscal stance over the medium term in light of external vulnerabilities built up over the years.
2. Increase the prudence and transparency of fiscal policy by (i) making a sufficiently prudent inventory of risks to public finances stemming from Public Private Partnerships and other contingent liabilities (ii) limiting the accumulation of new contingent liabilities reflected in the budget (iii) avoiding ad hoc increases in tax exemptions and subsidies, and (iv) making the medium-term economic scenario more conservative.
3. Focus monetary policy on the pursuit of price stability and ensure that the monetary policy stance is sufficiently tight to bring inflation back to the target band, anchor inflation expectations and increase trust in the local currency. Simplify the monetary policy framework by returning to the main policy rate as the key signaling device for the monetary policy stance in order to increase transparency of monetary policy. Closely monitor asset quality amid buoyant credit growth, especially for loans backed by the credit guarantee fund. Continue addressing possible risks associated with corporate forex borrowing.
4. With a view to improving the business environment, strengthen the rule of law and the judiciary. Further reduce the administrative burden for companies including by shortening the timing and lowering the cost of insolvency procedures through the effective implementation of the amended law on bankruptcy.
5. Adopt the strategy in support of research and development. Encourage private companies` uptake of innovative production processes.
6. Ensure a balanced regulation of the labour market combining flexibility with security including the reform of the severance pay system, and reduce informal employment through, inter alia, increase of inspection capacities, with particular focus on non-agricultural employment. Target support for job creation to youth and women. Focus support to the expanded provision of vocational training on sectors with growth potential and skills needs.