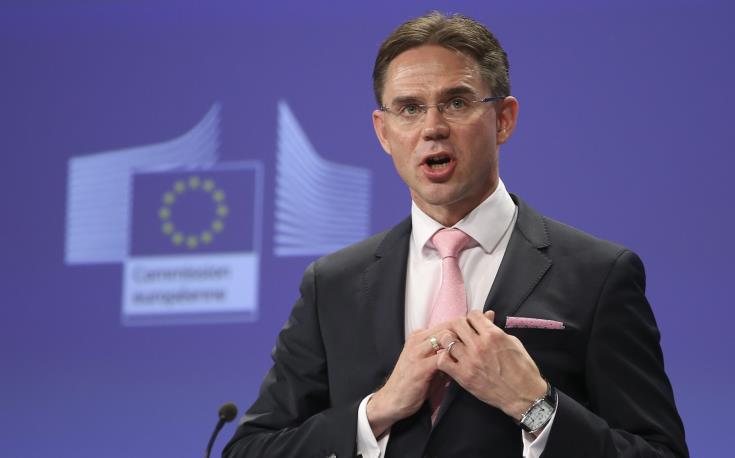 Investment and reforms are key to future growth, European Commission Vice President Jyrki Katainen has told CNA, a year ahead of the European Parliament elections as he called on all Member States, especially Cyprus and Greece, to make use of the renewed investment tools, offered at the European level.

“The multiannual financial framework (MFF) is not the medicine that cures all the wounds, but it can have a big impact if the priorities are right,” he said.

Katainen urged all those political leaders who still believe that an integrated Europe is better than a nationalistic Europe to defend it, pointing that this does not mean that one has to accept everything that the Commission proposes, but one should have a vision and articulate it clearly to citizens what your vision of Europe is.

In an interview with CNA, Jyrki Katainen, a former Prime Minister and Finance Minister of Finland, also warns against euroskeptisim and urges pro- european politicians to confront populists and euroskeptics in open debates. Finally he offers a glimpse of future public procurement in defense, through a Commission proposal, that will be tabled on Wednesday and has the potential to change the market.

Invited by CNA to outline the EFSI successor, he said “The investEU fund is built on the experience of EFSI, so what we want to do now is to create a more simple investment vehicle than what we had at the moment, so we want to pull together under one fund all centrally managed financial instruments – we had 14 actually – and the reason why we want to pull all of them together is to make it easy for all those who want to use financial instrument to apply.”

He describes the current structure as “quite a jungle” and was constructed in good faith, but in pIEces, which has created a messy situation. “So once EFSI expires at the end of 2020, we build a new fund with the experience we gathered from EFSI and we put in all the guarantee schemes, loan facilities and equities under one roof and regulation, so it is simpler for the end beneficiaries.”

The second thing, he explained, “is that we are trying to maximize the impact of our resources within the budget – so, pulling resources together, creates efficiency gains. So we expect to get 15% more investment just by reforming the way we use the resources.”

“The third element is that we want to open the EU guarantees to multiple financial institutions. The EIB will remain the main implementing partner, but the door is open for national promotional banks, EBRD type organisations. We want to increase and encourage innovation on regional and national level,” he added.

Finally, Katainen noted that “there is a novelty that allows M-S to allocate a part of EU structural funds in order to benefit from leverage effect. For instance, if one country puts 10 million of structural funds in the InvestEU fund, they can get much more financing for their own country, in investments, than just using the initial amount.”

Asked to explain why Cyprus is lagging behind on EFSI usage, he replied: “On Cyprus, it is not about the size that it is at the bottom of the list, because classification is per GDP. Malta is such a small island and in Luxemburg they may not had that many investment needs, but in Cyprus for some reason, we have not managed to encourage local businesses and authorities to look at the opportunities of EFSI. I could imagine that SME financing is one thing that Cyprus could and should use more. Also of course the infrastructure.”

CNA asked VP Katainen to give an outline of reforms against bottlenecks that the M-S should pursue as a matter of urgency.

Benchmarking the best performers who have the best educational system and vocational training is one thing, he believes. “Then in some countries they have issues with the judiciary. Either it is not transparent enough, or it is awfully slow. The business environment is like this. There is no silver bullet which would immediately open up money taps. If there are good projects, if there is demand and the business environment is stable, then usually money goes there. Sometimes, social type of reforms like education, can have significant impact.”

Referring to Reform Financing, Katainen said “Τhe current proposal focuses on pushing reforms forward. There are two angles. The first is to strengthen the structural reform support service and at the same time to allocate some resources to the M-S who are doing reforms”.

“Greece and Cyprus are pushing forward reforms. All the M-S have to reform all the time because the world around us is changing. We have services for all M-S including Cyprus and Greece, to help them to look at various fields of doing changes, and now there are, if M-S accept the budget proposals, there will be financial means to do the reforms. Even if someone could claim that reforms are valuable even without financial support, but if the proposal goes through, there will be incentives – to counter reform fatigue,” he said.

For instance if people in Europe believe that this is a good thing to enable 12 million Europeans to have a chance to study in another country or if Horizon Europe creates something which is desperately needed but it cannot be done on a national level, then again one can argue that there is European added value.
“The MFF is not the medicine that cures all the wounds, but it can have a big impact if the priorities are right,” he stressed.

The MFF sets the limits for the annual general budgets of the European Union. It determines how much in total and how much for different areas of activity the EU could use each year when it enters into legally binding obligations over a period of not less than 5 years. The recent MFFs usually covered 7 years.

Commenting on the upcoming Commission proposal on the EU Defence Fund and common military procurement, he said that “We are moving to this direction. We have three elements in this fund: the research window, the RnD window and the financial toolbox. The 3rd is mostly related to public procurement and is the thing that is still the most open at the moment.”

“What we are doing at the moment is to try to engage with finance and defence ministries to create financial vehicles that would enable countries to do common procurement. For example, if there are five countries planning to invest in satellite capacity, but the budgetary cycles are different, eg for Greece there is money for next year, for Germany in 2 years, Finland in 3 years, the countries cannot do joint acquisitions due to different budget cycles. So we are trying to create now a tool for the M-S to use to do joint acquisitions,” he noted.

As he points out, “at the end of the day the countries have the capabilities which they are buying and the unit cost will be lower. We are going to this direction. The defence sector, but also finance ministries, are very conservative. We cannot force them to, but they understand that this makes sense and we try to facilitate it. The DGECFIN is working with the fin mins for that. These vehicles can also be used for renewing traditional capabilities, like maritime vessels or planes.”

Talking about ways to address populism and respond to euroskeptiks, he said that there are different kinds of things to do to fight populism. The first thing, he explained, is to call on those who consider themselves not to be populists to show strong leadership.

“The referendum on Brexit is a good example that if you complain year after year and you are creating an enemy in front of your citizens that the EU is the enemy, most probably people will start believing it. Because they are your voters. If they don’t believe in you, you will not get elected. So, if you want to convince your citizens that the EU is your enemy, you will get what you ordered. And that is why those political leaders who still believe that an integrated Europe is better than a nationalistic Europe, they should strongly defend it,” he told CNA.

Nonetheless, he added, “this does not mean that you have to accept everything that the Commission proposes, but you should have a vision and articulate it clearly to citizens what your vision of Europe is. I feel this very strongly because I have been myself in this situation in my previous job.”

“I was challenged by populists and the main topic was EU. And I didn’t give up an inch. Sometimes I criticized what the Commission proposed but that didn’t mean that I wouldn’t support the European project. Instead I listed our own priority list- what should be done and actually it functioned very well. We managed to keep popularity of the EU, or at least the meaningfulness of the EU, ahead of the populist agenda. And this is what I am expecting from the political leaders. The second thing is that populism is rising easily if people don’t trust national institutions,” he added.

He indicated that if people do not trust national institutions, they are not likely to trust other institutions.

“Politicians cannot afford to undermine the people who are voting for populists. They are our citizens. They have same obligations and rights as anyone else. And this is why not recognizing these opinions as valuable opinions is the way to feed populism. So you have to face openly and in a transparent manner these topics. So these are few issues,” he concluded.

By In Cyprus
Previous articleIs the World Cup for nationalists or citizens of the world?
Next articlePupils help sink new artificial reef in Limassol (video)