EU agrees to work with May on Brexit demands 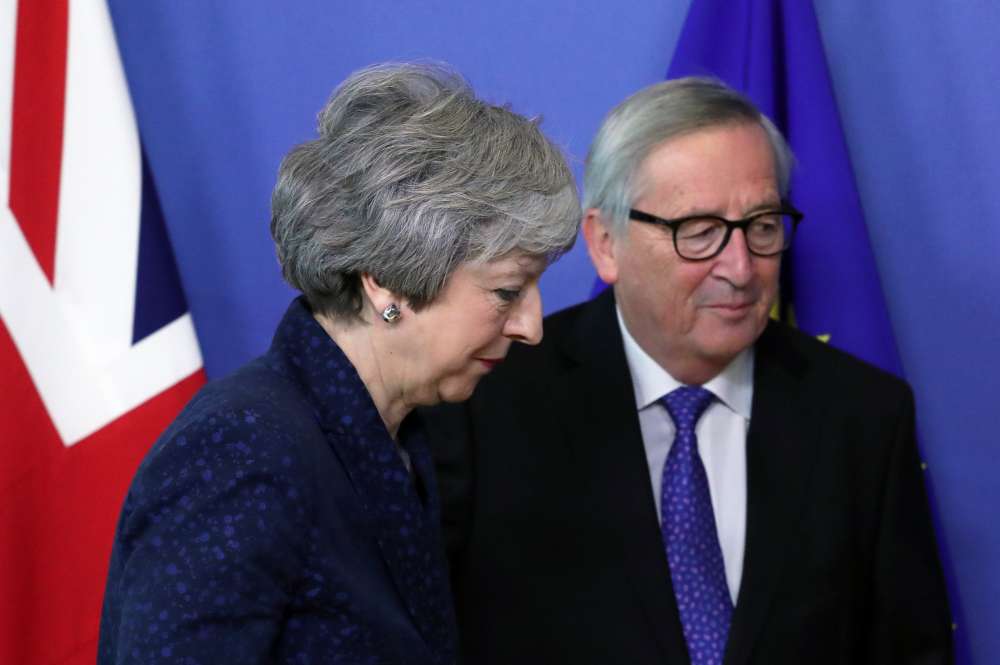 The European Union on Thursday promised to work with Theresa May on “whether a way through can be found” to avoid the disruption of a no-deal Brexit after the British prime minister demanded changes to the divorce deal to get it through parliament.

May was in Brussels on Thursday to plead with EU leaders to change the Withdrawal Agreement she negotiated last year, after the British parliament rejected it overwhelmingly in January.

A cool handshake for the cameras with European Commission President Jean-Claude Juncker did little to conceal the tension, just 50 days before Britain could leave the European Union without measures in place to keep trade flowing freely.

Neither spoke, with one reporter shouting to the retreating leaders: “Is this hell, prime minister?” EU summit chair Donald Tusk said on Wednesday that Brexit promoters deserved “a special place in hell” – a blunt display of frustration in Brussels that drew condemnation from many in Britain.

“President Juncker underlined that the EU27 will not reopen the Withdrawal Agreement,” the EU’s executive arm said after what it described as “robust but constructive” talks with May.

But the two tasked their teams to work on “whether a way through can be found that would gain the broadest possible support in the UK Parliament and respect” the EU’s stance. They agreed to meet again before the end of the month.

Parliament, which rejected May’s agreement by the biggest majority in modern British history, voted to renegotiate the deal, replacing a provision that some fear could keep British-ruled Northern Ireland under EU rules indefinitely.

EU leaders have repeatedly said it would be impossible to replace the provision, known as the “backstop”, because it is required to ensure no hard border, once a focus for sectarian violence, between Northern Ireland and EU-member Ireland.

Unless parliament approves a deal, Britain is on course to leave the EU on March 29 with no transition arrangement in place, a scenario that many businesses say would be catastrophic for the economy. Other options could include delaying Brexit, holding a new referendum or cancelling it altogether.

The Bank of England said Britain faced its weakest economic growth in 10 years in 2019, blaming mounting Brexit uncertainty and the global slowdown.

Governor Mark Carney said: “The fog of Brexit is causing short term volatility in the economic data, and more fundamentally, it is creating a series of tensions in the economy, tensions for business.”

“I would have described no deal, no transition a few years ago as a low probability event. I’d describe it now as not the central scenario, so in other words … yes, the probability has gone up,” he said.

German Chancellor Angela Merkel, the EU’s most powerful leader who has highlighted in recent days the responsibility of both sides to reach an agreement, on Thursday said a solution could be found without reopening the accord.

May will return to parliament on Feb. 14 for a debate on the Brexit negotiations when lawmakers could again try to wrest control of the process from her, but a vote on approving the Brexit deal is likely to come later in the month.

Both May’s Conservative Party and the main opposition Labour Party are formally committed to carrying out Brexit following a 2016 referendum in which voters chose to leave the EU by a margin of 52-48 percent. But both parties are deeply divided internally over how or even whether to do so.

In a letter to May released on Wednesday, Labour leader Jeremy Corbyn set out five conditions for Labour to support a deal, including a “permanent and comprehensive” customs union with the bloc, which May has ruled out.

The EU sees a permanent customs union with the United Kingdom after Brexit as its preferred way out of the Irish backstop stalemate.

Before arriving in Brussels for talks with EU leaders, May acknowledged that neither side expected a breakthrough on Thursday.

Tusk channelled the frustration in Brussels on Wednesday with unusually strong words, saying he wondered what “that special place in hell looks like, for those who promoted Brexit, without even a sketch of a plan how to carry it out safely.”

The main stumbling block to winning British parliamentary approval of the deal is the Northern Irish backstop, an insurance policy that requires some EU rules to operate in the British-ruled province unless another means can be agreed in future to guarantee a land border free from inspections.

Some lawmakers want May to remove the provision entirely, while others say they will accept a way for London to end it unilaterally or legally-binding assurances that it would not lead to Britain being trapped in the EU’s sphere indefinitely.

The EU says the political instability in Britain has further proved the need for the backstop.

By In Cyprus
Previous articleGreens want ban on crocodile, marine animal parks
Next articleJuvenile delinquency bill in the works