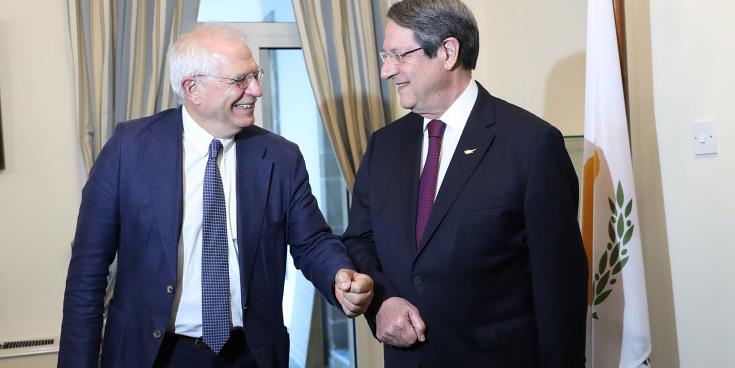 The 27 EU Foreign Ministers late on Friday expressed their full solidarity with Greece and Cyprus during a teleconference of the Foreign Affairs Council, calling on Turkey to de-escalate tensions and return to dialogue.

This is what EU High Representative for Foreign Affairs and Security Policy Josep Borrell said, adding that “a good and productive Foreign Affairs Council has been completed”.

He then referred to the Eastern Mediterranean, pointing out that the EU 27 expressed “full solidarity with Greece and Cyprus…there is a demand for an immediate de-escalation by Turkey and the resumption of dialogue”.

Regarding Belarus, he said that “the EU does not accept the election results” and “work is underway to impose sanctions on those responsible for the violence and falsification”.

Meanwhile, according to the Ambassador and Permanent Representative of Italy to the EU Political Security Committee (PSC), Marco Peronaci, “in full view of the tensions in the Eastern Mediterranean, full solidarity was expressed with Greece and Cyprus.

“A moratorium on exploitation in disputed areas is an option under discussion,” he said.

In addition, the 27 expressed full solidarity with the people of Belarus and condemned the election irregularities, human rights violations and the use of force against peaceful protesters.

“Minsk must start a dialogue with the opposition and take measures to eliminate tensions,” he said, adding that “targeted sanctions are under consideration.”

Regarding Lebanon, he said that “political actors must work together to form a new government of national unity and start a dialogue with civil society. In addition to humanitarian aid, the EU stands ready to support economic and financial recovery. of the country “, he noted.

Finally, with regard to Venezuela, he noted that “there is great concern about the implementation of minimum standards for credible parliamentary elections scheduled for next December.

The International Contact Group should redouble its efforts to facilitate the resumption of the dialogue, stated Ambassador Peronaci.

According to another diplomatic source, Greece had earlier circulated a draft condemnation statement to the Council against Turkey, which contained an explicit reference to sanctions, called for an immediate end to Turkey`s exploration and welcomed Greece`s agreement with Egypt.

The same source states that Germany and other countries blocked the statement, and expressed dissatisfaction with the timing of the agreement, shortly before the start of the Greek-Turkish contacts mediated by Germany.

The Greek draft was similar to that of Borrell`s statement of 13 July. Following this development, Greece blocked a similar announcement about Belarus, the diplomatic source said.

By Annie Charalambous
Previous articleThirteen new corona virus cases detected out of 2,960 tests
Next articleMalta and Russia agree to amend their taxation treaty