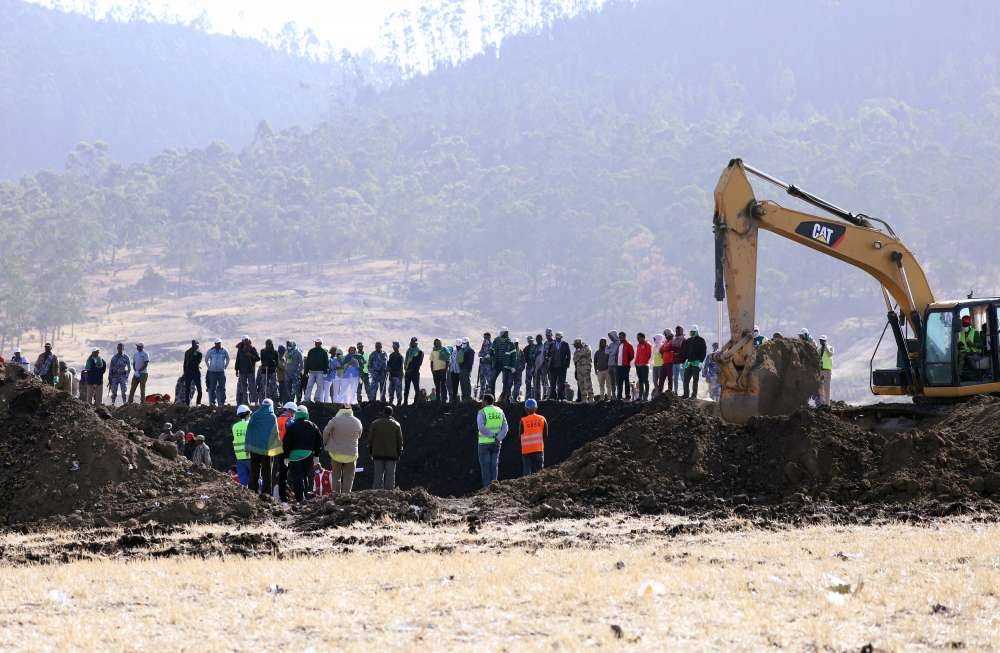 The Ethiopian Airlines plane that crashed killing 157 people was making a strange rattling noise and trailed smoke and debris as it swerved above a field of panicked cows before hitting earth, according to witnesses.

Flight 302 took off from the Ethiopian capital on Sunday morning bound for Nairobi with passengers from more than 30 countries. All on board the Boeing 737 MAX 8 died.

The pilot had requested permission to return, saying he was having problems – but it was too late.

Half a dozen witnesses interviewed by Reuters in the farmland where the plane came down reported smoke billowing out behind, while four of them also described a loud sound.

“It was a loud rattling sound. Like straining and shaking metal,” said Turn Buzuna, a 26-year-old housewife and farmer who lives about 300 metres  from the crash site.

“Everyone says they have never heard that kind of sound from a plane and they are under a flight path,” she added.

Malka Galato, 47, a barley and wheat farmer whose field the plane crashed in, also described smoke and sparks from the back. “The plane was very close to the ground and it made a turn… Cows that were grazing in the fields ran in panic,” he said.

Tamirat Abera, 25, was walking past the field at the time. He said the plane turned sharply, trailing white smoke and items like clothes and papers, then crashed about 300 metres away.

“It tried to climb but it failed and went down nose first,” he said. “There was fire and white smoke which then turned black.”

As the plane had only just taken off, it was loaded with fuel.

At the site, Red Cross workers in masks sifted gently through victims’ belongings. Children’s books – Dr Seuss’s “Oh The Thinks You Can Think” and “Anne of Green Gables” – lay near a French-English dictionary burnt along one edge.

A woman’s brown handbag, the bottom burnt, lay open next to an empty bottle of perfume.

The aircraft was broken into small pieces, the largest among them a wheel and a dented engine. The debris was spread over land roughly the size of two football fields.

“When it was hovering, fire was following its tail, then it tried to lift its nose,” said another witness, Gadisa Benti. “When it passed over our house, the nose pointed down and the tail raised up. It went straight to the ground with its nose, it then exploded.”

“We are shocked and saddened,” he said.