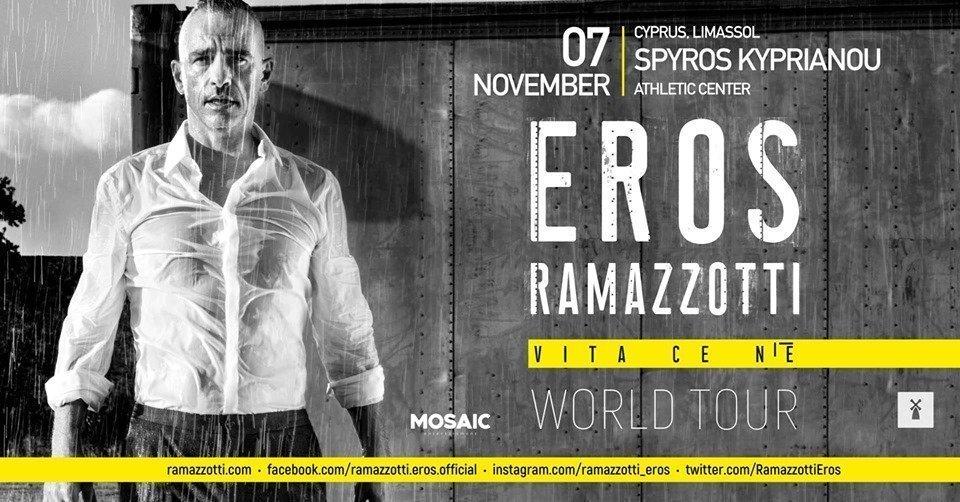 In more than 30 years of his career, Eros Ramazzotti has sold over 60 million albums, holds countless prizes and records, while prominent is the duet with artists such as Carlos Santana, Cher, Tina Turner, Andrea Bocelli , Patsy Kensit, Anastacia, Joe Cocker, Ricardo Arjona, Luciano Pavarotti, Laura Pausini and Ricky Martin.
Born in the “eternal city” of Rome, where “it is easier to dream than to look at reality”, he managed to conquer the planet with songs of passion and love, such as “Non siamo soli”, “Un’altra te” , “Terra promessa”, “Parla Con Me”, “Unastoria importante”, “A cuore con al ali”, “Adesso tu”, “Can not Stop Thinking of You” “,” L’aurora “,” Più chelo pua “,” Non ti prometto niente “,” I Belong to You “,” La nostra vita “,” Ci parliamoda grandi “,” Dove and nascondono gli angeli “,” Il tempo tra di noi “,” Musica è “and dozens more to enjoy in our country.
His new world tour is being added to his already dozens of super-successors, bringing to 5 continents a fantastic show! It started in February 2019 from Munich and through dozens of major European countries in the summer reaches North and South America – with additional dates to be expected to return again in the autumn to Europe and of course to Cyprus!
The new and highly anticipated album of the Italian superstar is titled “Vita Ce N’e” and released on November 23, 2019 in all natural and digital formats by Polydor.