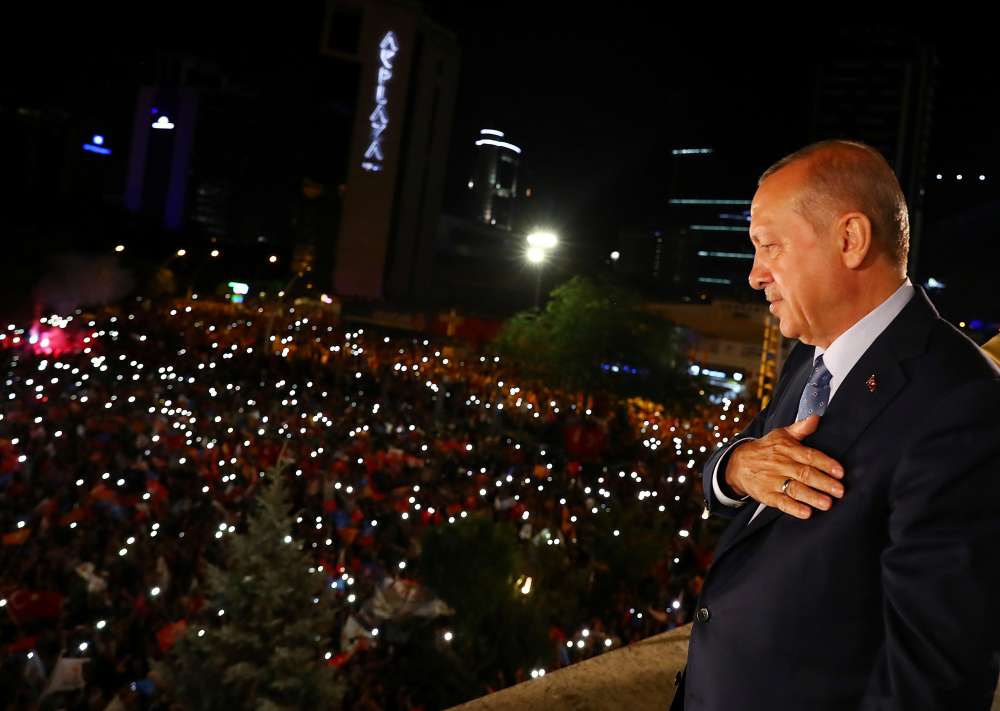 Turkish President Tayyip Erdogan won sweeping new executive powers on Monday after his victory in landmark elections that also saw his Islamist-rooted AK Party and its nationalist allies secure a majority in parliament.

Erdogan’s main rival, Muharrem Ince of the Republican People’s Party (CHP), conceded defeat but branded the elections “unjust” and said the presidential system that now takes effect was “very dangerous” because it would lead to one-man rule.

Erdogan, 64, the most popular – yet divisive – leader in modern Turkish history, told jubilant, flag-waving supporters there would be no retreat from his drive to transform Turkey, a NATO member and, at least nominally, a candidate to join the European Union.

He is loved by millions of devoutly Muslim working class Turks for delivering years of stellar economic growth and overseeing the construction of roads, bridges, airports, hospitals and schools.

But his critics, including human rights groups, accuse him of destroying the independence of the courts and media freedoms. A crackdown launched after a failed 2016 coup has seen 160,000 people including teachers, journalists and judges detained.

Erdogan and the AK Party claimed victory in Sunday’s presidential and parliamentary elections after defeating a revitalised opposition that had gained considerable momentum recently and looked capable of staging an upset.

“It is out of the question for us to turn back from where we’ve brought our country in terms of democracy and the economy,” Erdogan said on Sunday night.

With virtually all votes counted, Erdogan had 53 percent against Ince’s 31 percent, while in the parliamentary vote the AKP took 42.5 percent and its MHP nationalist allies secured 11 percent, outstripping expectations.

Voter turnout was high, at nearly 87 percent. The High Election Board (YSK) declared the elections “healthy”.

Turkish markets initially rallied on hopes of increased political stability – investors had feared deadlock between Erdogan and an opposition-controlled parliament – but then retreated amid concerns over future monetary policy.

The vote ushers in a powerful executive presidency backed by a narrow majority in a 2017 referendum. The office of prime minister will be abolished and Erdogan will be able to issue decrees to form and regulate ministries and remove civil servants, all without parliamentary approval.

“The new regime that takes effect from today is a major danger for Turkey… We have now fully adopted a regime of one-man rule,” Ince told a news conference.

His secularist CHP won 23 percent in the new parliament and the pro-Kurdish HDP nearly 12 percent, above the 10 percent threshold needed to enter parliament.

Critics say that campaigning took place under deeply unfair conditions, with Erdogan dominating media coverage in the run-up to the vote, and his opponents getting little air time.

The HDP’s presidential candidate, Selahattin Demirtas, campaigned from a prison cell, where he is detained on terrorism charges he denies. He faces 142 years in prison if convicted.

The elections were held under the state of emergency imposed shortly after the 2016 coup, in which at least 240 people were killed. Erdogan has said he will soon lift the emergency.

The MHP takes a hard line on the Kurds, making it less likely that Erdogan will soften his approach to security issues in mainly Kurdish southeast Turkey and neighbouring Syria and Iraq, where Turkish forces are battling Kurdish militants.

The Turkish lira and stocks surrendered early gains, and economists said the outlook was uncertain.

“…Any rally could quickly go into reverse if President Erdogan uses his strengthened position to pursue looser fiscal and monetary policy, as we fear is likely,” said Jason Tuvey, senior emerging markets economist at Capital Economics.

The lira is down some 19 percent since January and investors fear Erdogan, a self-declared “enemy of interest rates”, may pressure the central bank to cut recently hiked borrowing costs to stimulate economic growth despite double-digit inflation.

The EU’s executive Commission said it hoped Erdogan would “remain a committed partner for the European Union on major issues of common interest such as migration, security, regional stability and the fight against terrorism”.

Turkey’s years-long EU accession bid stalled some time ago amid disputes on a range of issues, including Ankara’s human rights record, especially since the post-coup crackdown.

Germany, the EU’s biggest economy and home to a large Turkish diaspora, said it expected constructive relations. It also said four Germans had been detained in Turkey during Sunday’s elections but did not say why. One has been freed.

The state-run Anadolu news agency said that, based on unofficial results, the AK Party and its MHP ally would hold 343 seats in the 600-seat parliament – 293 of those for the AKP and 50 for the nationalists.

The main opposition CHP will have 146 seats, the pro-Kurdish HDP 67 and the breakaway nationalist Iyi Party 44. (