Erdogan says no setback in missile deal with Russia; as Trump voices sympathy 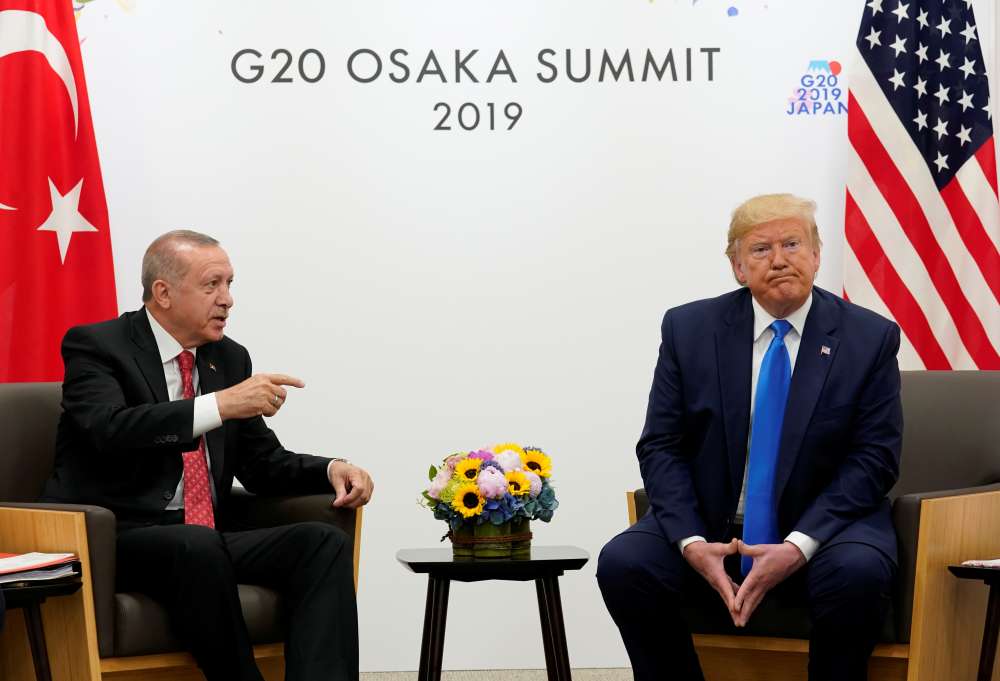 Turkey said on Saturday there was no setback in its plan to buy Russian S-400 missile defence systems, despite U.S. opposition, and President Donald Trump expressed understanding for the decision but did not rule out sanctions in response.

Turkey has dismissed the warnings and said it would not back down, as already strained ties between the two countries have deteriorated further over the dispute.

Speaking before talks with Russian President Vladimir Putin on the sidelines of a G20 summit in Japan, Turkish President Tayyip Erdogan said the deal for the S-400s showed improving ties between Turkey and Russia.

“Now, I believe eyes are on the delivery process of this issue, but there are no setbacks in our agreement,” Erdogan said, adding that it was a priority for Turkey that the deal includes joint production of the systems and a technology transfer.

Erdogan also said it was important for Turkey to finish the first reactor in the Akkuyu nuclear power plant, its first nuclear plant, by 2023. He said non-nuclear equipment at the plant should be procured from Turkey.

The plant is being built by Russia’s Rosatom at a cost of more than $20 billion.

In an effort to sway Turkey, the United States has offered to supply it with its Raytheon Co Patriot missiles, but Erdogan has said the U.S. offer was not as good as Russia’s S-400 proposal.

Under the possible U.S. sanctions, Turkey could face expulsion from the F-35 programme among other measures that could deal a significant blow to Turkey’s ailing economy and its defence industry sector.

Even minor U.S. sanctions could prompt another sharp sell-off in the Turkish lira. A 30% slide in the currency drove the economy into recession last year.

The lira has fallen another 10 percent this year, and markets remain on edge.

Despite the threat of sanctions, Turkey has put its hopes in the relationship between Erdogan and Trump, saying it expected the U.S. president to protect it from sanctions over the S-400 deal.

Erdogan, in comments ahead of a meeting with Trump, said he believed Turkey and the United States would act in line with their strategic partnership.

Trump, sitting alongside Erdogan, said the United States faced a “complicated” situation in how to respond to the S-400 deal, adding that sanctions were being discussed.

“We have a very complicated situation because the president was not allowed to buy the Patriot missiles,” Trump said.

“You can’t do business that way. It’s not good.”

“They would not let him buy the missile that he wanted to buy, which is the Patriot. He’s a NATO member. He’s somebody that I’ve become friendly with. And you have to treat people fairly,” he said.

“I don’t think he was treated fairly.”

Asked if the United States would impose sanctions on Turkey, Trump said the issue was being discussed, but it was a “two-way street” and both sides were evaluating “different solutions”.

In a readout of the meeting, which lasted for about 40 minutes, the White House said Trump “expressed concern” over the S-400 deal and “encouraged Turkey to work with the United States on defence cooperation in a way that strengthens the NATO alliance”.

The S-400s are expected to be delivered in Turkey in the first half of July. Turkish officials have said discussions on where the systems would be stationed are underway.

By In Cyprus
Previous articleG20 confirms need for free, fair, non-discriminatory trade
Next articleTwo more helicopters will be available to fight fires this summer