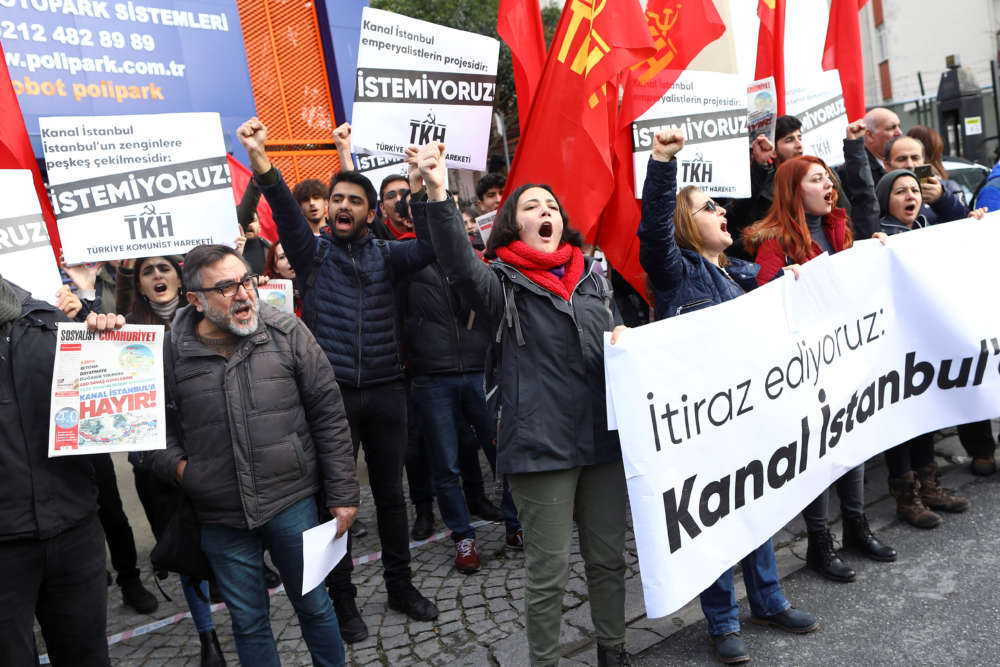 President Tayyip Erdogan has revived plans to dig a canal on the edge of Istanbul despite opposition from hundreds of petitioners and the city’s new mayor against the kind of mega project that has come to define Turkey’s economic boom and bust.

Last year Turkey effectively paused the project, estimated to cost 75 billion lira ($12.6 billion), as the economy tipped into recession. But in recent weeks Erdogan has put building the 45-km (28-mile) ‘Kanal Istanbul’ atop his domestic agenda, raising concerns from environmentalists and architects.

The 400 metre-wide canal planned to the west of Istanbul would connect the Black Sea in the north to the Sea of Marmara, which eventually runs into the Mediterranean. It would ease shipping congestion on the picturesque Bosphorus, a natural strait that intersects Turkey’s largest city.

A cargo ship ran aground Friday on the Bosphorus, among the world’s busiest waterways, a rare such accident that Erdogan says the canal can prevent.

Erdogan says the canal is needed to ease traffic on the Bosphorus and protect its historic structures, calling it an “environmental salvation”.

He first mentioned the idea in 2011, dubbing it his “crazy project”. But a currency crisis in 2018 prompted Turkey to freeze investments in large projects.

Kanal Istanbul returned to the president’s agenda in November and sparked a confrontation with Istanbul’s new mayor, Ekrem Imamoglu of the main opposition party.

Imamoglu, seen by some as a likely future presidential candidate, dealt Erdogan’s ruling party a stinging defeat when he was elected this year. He has emerged as the project’s chief opponent, warning it will cost too much and wreak environmental havoc.

Istanbul’s rapid growth and its lack of green space are a major public concern, and plans to build over a park in the city in 2013 triggered nationwide protests.

The proposed canal would run through a lagoon whose ecosystem, vital for marine animals and migratory birds, would be destroyed, according to the Union of Chambers of Turkish Engineers and Architects (TMMOB).

The group says it would demolish two basins that provide nearly a third of the city’s fresh water; increase the salinity of underground streams, harming agricultural land as well to the west; and raise oxygen levels in the Black Sea.

The canal is the latest in a series of massive construction projects fuelled by cheap foreign credit that drove a mostly booming economy under Erdogan’s 17-year rule.

It is unclear how the canal would be financed. The central government has pitched a build-operate-transfer model but, failing that, has said it would tap its budget.

Bankers have privately raised questions whether some big Turkish lenders would finance the project.

In September, six Turkish banks signed a United Nations initiative (UNEP FI) requiring them to assess the social and environmental impact of a project before extending financing.

For Russia, Ukraine and other Black Sea states, the canal raises tricky questions about shipping and naval passage.

The 1936 Montreux Convention gives Turkey control over the straits within its borders, and during peacetime guarantees access for civilian vessels. It also limits access of naval warships, helping to protect the Black Sea from militarisation.

But a Turkish official said on Thursday the Montreux Convention would not cover the canal.

“Kanal Istanbul would possibly open the door to U.S. warships in the Black Sea. That is the fear in Moscow,” said Sinan Ulgen, a former Turkish diplomat and visiting scholar at Carnegie Europe in Brussels.