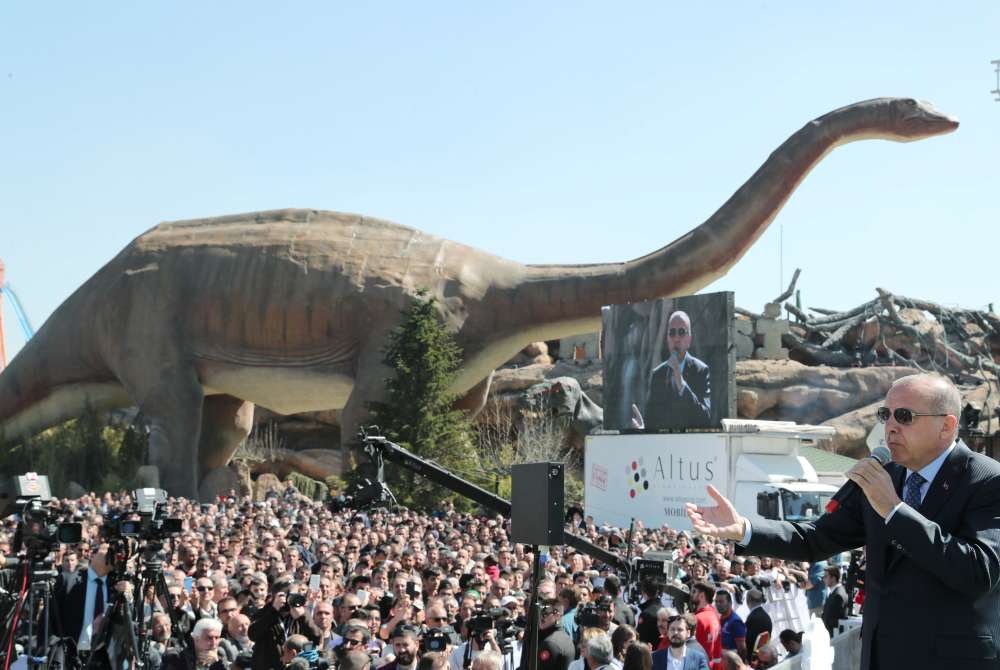 Turkish President Tayyip Erdogan opened a giant theme park in Ankara on Wednesday as he campaigned ahead of local elections that might see his AK Party lose control of the capital.

Construction of the 1.3-million-square-metre park started nearly six years ago and was completed last year, but the park had not been opened to the public amid safety fears over some of the rides and games.

Melih Gokcek, the former AKP mayor of Ankara, was shown stuck at the top of a roller-coaster shortly after the park, Ankapark Wonderland Eurasia, was completed at a cost of 1.4 billion lira ($256 million).

Speaking in front of a towering model of a Tyrannosaurus dinosaur and a fountain decorated with cat statues, Erdogan said the park would provide the municipality with 50 million lira a year.

“Ankapark … isn’t just a symbol of pride for Ankara, but all of Turkey,” Erdogan told thousands of gathered supporters.

The park’s general manager, Cem Uzan, said that all its machinery had been procured from “the best producers” in the field and would be subject to routine and special inspections.

The park will host 2,117 attractions including 14 roller-coasters, he said in a statement, and was expected to attract 5 million visitors in its first operational year.

Erdogan said on Wednesday that entrance to the park would be free until election night on March 31.

Ankara is seen as a battleground city in the campaign, with polls suggesting the main opposition CHP could overtake the AKP due largely to an ailing economy that is tipping into recession after years of strong growth.

Critics say the park suffers safety problems and that the prolonged delay to the formal opening meant the safe lifespan of many attractions had already expired, posing risks to visitors.

The Ankara office of the Union of Chambers of Turkish Engineers and Architects (TMMOB) said it had examined public photographs of the park which showed rust on roller-coasters and issues at the foundation of other attractions.

“This situation is a sign that in sensitive places like this, even if it is not today, it will definitely lead to problems,” TMMOB Ankara chairwoman Tezcan Karakus Candan said in a statement.

The park’s opening comes as Erdogan is seeking to drum up support for his Islamist-rooted AKP, which has dominated Turkish politics for more than 16 years.

Major construction projects have accompanied Erdogan’s ascent to dominance over the past 16 years, but a currency crisis last year and soaring prices due to high inflation have increased disenchantment among Turks.

“When we think of the economic crisis, what our people need is access to healthy foods. While a common mind has seen this, you’re putting up a rusty lump of metal,” Candan said.