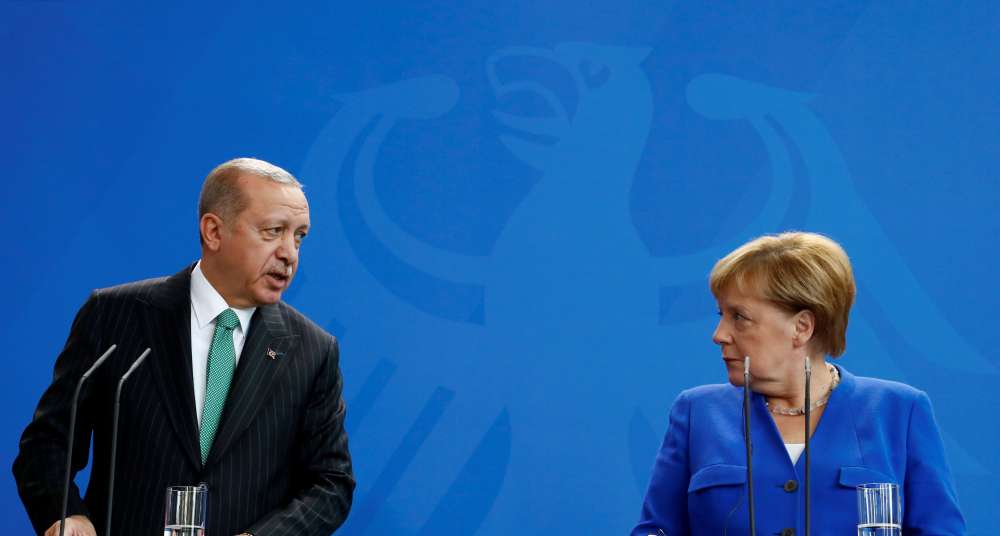 Turkey aims to win easier access to the European Union for its citizens, President Tayyip Erdogan said in Berlin on Friday.

On the second day of a state visit aimed at patching cracks in Turkey’s relationship with Germany and the EU, Erdogan said his government would move to meet the EU’s criteria for achieving visa liberalisation.

Turkey, whose economic crisis has been aggravated by sanctions imposed by U.S. President Donald Trump, is hoping improved relations will bring in private investment from the economic superpower on its doorstep.

Germany, home to three million ethnic Turks and reliant on Turkey to help contain a migrant crisis beyond Europe’s borders, is also keen to repair ties, which have frayed since the Turkish crackdown after a failed coup in 2016. But there are concerns about Turkey’s human rights record and press freedom.

“We are planning to fulfil the remaining six criteria for visa liberalisation as soon as possible,” Erdogan said. “Visa liberalisation, updating the customs union and reviving accession talks will benefit both Turkey and the EU.”

Merkel, at the same news conference, said she had pushed for the release of German citizens among the tens of thousands of people arrested since the coup, blamed by Ankara on supporters of U.S.-based cleric Fetullah Gulen. Gulen denies involvement.

Germany needed more evidence if it was to classify Gulen’s movement, described by Turkey as the Fetullah Gulen Terrorist Organisation (FETO), as an illegal group like the Kurdish militant PKK.

“We take very seriously the evidence Turkey provided but we need more material if we are to classify it in the same way we have classified the PKK,” she said.

She said authorities were looking for suspected coup plotters that Turkey wanted extradited, but said she and Erdogan had differing views on topics including press freedom.

Newspaper Bild reported that Erdogan had been ready to call off the news conference if it was attended by Can Dundar, a journalist who fled into German exile after spying charges were brought against him.

“Erdogan said he would cancel the news conference if I came,” Dundar said in a statement. “I did not think one question would scare him this much.”

Dundar and a colleague from the Cumhuriyet newspaper, Erdem Gul, were sentenced in 2016 to five years in prison for publishing a video purporting to show Turkey’s intelligence agency trucking weapons into Syria. They were released pending appeal and Dundar left the country.

Turkey’s highest court ruled in March that Dundar should have been sentenced to up to 20 years in prison on espionage charges.

Asked about Dundar’s absence, Erdogan described the former editor as a “spy” who should be extradited to Turkey. Merkel said it had been Dundar’s decision to stay away.

During the news conference, a man wearing a T-shirt with the slogan “Freedom for Journalists” was led out when he began attempting to shout Erdogan down.

Much of central Berlin was in lock-down for the visit, reflecting nervousness at the divisiveness of a visitor who is hailed a hero by many German Turks and reviled as an autocrat by many others. Protesters holding Turkish flags and posters of Erdogan’s political opponents lined some streets

By In Cyprus
Previous articlePolice bust two drug rings, seize 57 kilos of cannabis
Next articleCyprus, Greece and Egypt call on Turkey to cease all illegal activities within Cyprus’ maritime zones