Erdogan calls on Germany to list Gulen group as terrorists 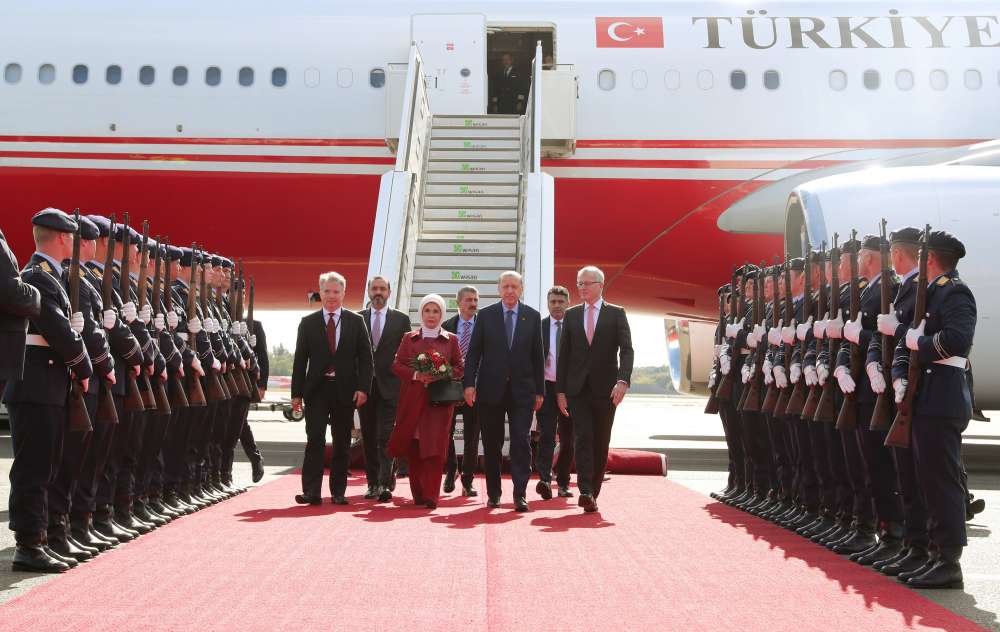 President Tayyip Erdogan, arriving in Germany for a three-day state visit, urged Berlin to designate as a terrorist organisation the movement of Fethullah Gulen which Turkey blames for a 2016 coup attempt.

His call, in a newspaper article, for Germany to join Britain in blaming the U.S.-based cleric for the coup, highlighted the gulf Erdogan must bridge if he is to repair strained political and commercial ties.

Germany has so far said it needs more proof linking the network of Gulen’s supporters, which Turkey labels the Gulenist Terrorist Organisation (FETO), to the failed attempt to overthrow the Turkish government.

But, as Erdogan was whisked through a locked-down city to his hotel by the Brandenburg Gate, allegations that a Berlin police officer had been spying on exiled dissidents for Turkish security services highlighted the two sides’ mutual mistrust.

Germany’s refusal to extradite military officers Turkey accuses of participating in the coup attempt, after they claimed asylum, enraged Ankara. Berlin is concerned about the fate of tens of thousands of people imprisoned in the subsequent crackdown who included dozens of German citizens.

But with Turkey’s economy in crisis and Berlin reliant on Turkey both because of the three million ethnic Turks who call Germany home and to contain the refugee crisis beyond Europe’s borders, both sides want to put aside their difference.

“We are pursuing the goal of increasing our trade and economic ties,” Erdogan wrote in an article on the website of Germany’s Frankfurter Allgemeine. “For the sake of prosperity and the future of both our countries, let us increase our mutual interests and reduce our problems.”

Erdogan will meet Chancellor Angela Merkel three times during his state visit. But he faces a frosty reception.

After years of breakneck growth, Turkey has seen its heavy foreign debt load increased by the lira’s 40 percent slide this year – a sell-off that intensified after President Donald Trump imposed sanctions in retaliation for the detention of a U.S. pastor.

Underlining the cool reception Erdogan can expect, demonstrators gathered at a Berlin airport hours before his arrival, protesting over the state of press freedom in Turkey, where dozens of critical journalists are jailed. Others were waiting near his hotel.

“We have to talk with each other,” junior foreign minister Michael Roth told German radio. “There must be no other country outside the European Union with whom relations are so important and yet so difficult.”

Both sides have dismissed suggestions that Turkey could seek financial aid from Germany or the EU. But a rapprochement could unlock valuable investment from Germany’s manufacturers who have been deterred by Turkey’s recent volatility.

Authorities, who fret at Erdogan’s influence over German Turks, have warned Erdogan against campaigning overtly when he opens a mosque on Saturday in Cologne, home to one of Germany’s largest Turkish communities.

Ankara plays close attention to its diaspora communities worldwide. Just how close became clear when Berlin police announced that an officer was suspected of reporting to the Turkish security services. The Tagesspiegel newspaper reported he had leaked the address of a Berlin-based exile dissident.

“If the suspicions are confirmed, then not only was an oath of service broken, but a serious crime was committed … the damage from which could not be undone,” the police force tweeted.

Against that backdrop, the announcement in Nyon, Switzerland, on Thursday that Germany had beaten out Turkey, another soccer-mad nation, to host the 2024 UEFA championships will be the least of diplomats’ concerns.