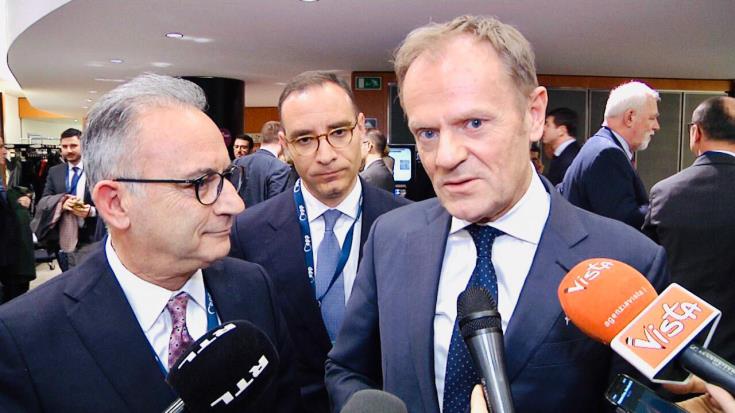 European People`s Party Donald Tusk promised Democratic Rally President Averof Neofytou support in Cyprus` efforts to protect independence and sovereignty in all aspects, following a meeting of the political assembly of the EPP family in Brussels.

In this context and the same joint Press point EPP President Tusk reiterated the following: “as you know it is nothing new for you, for me, for our colleagues at the EPP, our constant support for Cyprus. I still remember my visit to Cyprus when I was still the President of the European Council and the tough and clear message about Cyprus, about this very aggressive behavior of Turkey and I can only reconfirm also as President of the EPP, under my new capacity, I will in a very consistent way support Cyprus in your efforts to protect your independence and sovereignty in all aspects. Because your sovereignty and independence mean also European sovereignty and independence. You can count on us. And I believe I can say these words not on behalf of our political family but behalf of the whole of Europe”.

By Josephine Koumettou
Previous articleEnergy consumption remains stable in Cyprus and the EU in 2018
Next articleCoronavirus: What measures apply at the checkpoints