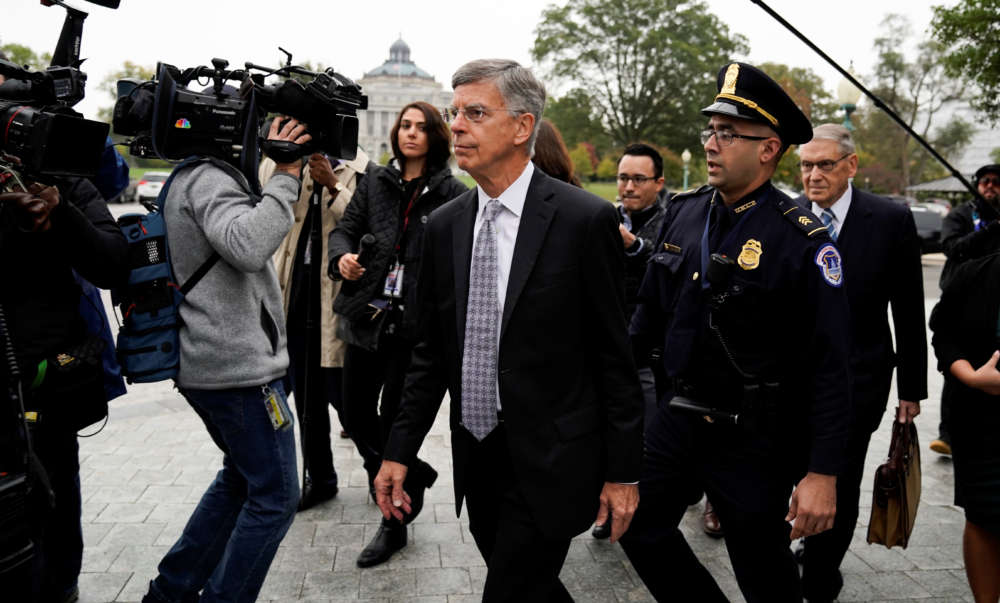 The top U.S. diplomat in Ukraine testified on Tuesday he was told that President Donald Trump made the release of security aid to Ukraine contingent on Kiev publicly declaring it would carry out politically motivated investigations that he sought, according to a copy of his statement to lawmakers.

William Taylor, who as the charge d’affaires is the senior American envoy in Ukraine, gave closed-door testimony to the three Democratic-led House of Representatives committees leading an impeachment inquiry against Trump. The Washington Post posted a copy of Taylor’s opening statement online.

Taylor testified he was told by Gordon Sondland, the U.S. envoy to the European Union, that Trump had made the release of the withheld aid contingent on Kiev making public declarations that it would investigate domestic political rival Joe Biden and his son Hunter Biden as well as an issue relating to the 2016 election.

The House inquiry is focusing on Trump’s request during a July 25 telephone call with Ukrainian President Volodymyr Zelenskiy that he investigate the Bidens. Joe Biden, the former vice president, is a leading contender for the 2020 Democratic presidential nomination to face Trump. Hunter Biden had served on the board of Ukrainian energy company Burisma.

Trump made his request – described by Democrats as an improper invitation for foreign interference in an American election – after withholding $391 million in security aid approved by the U.S. Congress to help combat Russia-backed separatists in eastern Ukraine. Zelenskiy agreed to the request. The aid was later released.

Referring to Taylor, Democratic Representative Debbie Wasserman Schultz said, “I really felt like he drew the most direct line that I’ve heard from President Trump to the withholding of foreign aid to a vital diplomatic partner that needs those resources to keep Russia at bay and tying the withholding of that funding and the meeting that President Zelenskiy wanted to President Zelenskiy declaring that he would open investigations into the Burisma Biden issue and the 2016 election.”

Taylor’s appearance marked another pivotal development in the political drama unfolding in Washington that threatens Trump’s presidency even as he pursues re-election in 2020.

“During that phone call, Ambassador Sondland told me that President Trump had told him that he wants President Zelenskiy to state publicly that Ukraine will investigate Burisma and alleged Ukrainian interference in the 2016 election,” Taylor told lawmakers, according to the copy of his opening statement.

The “alleged Ukrainian interference” is a reference to a debunked conspiracy theory that it was Ukraine, and not Russia, that interfered in the 2016 U.S. election and that a Democratic National Committee (DNC) computer server is in Ukraine. U.S. intelligence agencies and a special counsel investigation concluded that Russia used a campaign of hacking and propaganda to undermine Democratic candidate Hillary Clinton and boost Trump’s candidacy in 2016.

Trump, a day after calling on his fellow Republicans to get tougher in defending him in the inquiry, inflamed the controversy by writing on Twitter, “All Republicans must remember what they are witnessing here – a lynching. But we will WIN!”

African American lawmakers and others denounced Trump for the remark because of the past U.S. history of lynching of black people, particularly in formerly pro-slavery Southern states.

“Lynching is a reprehensible stain on this nation’s history, as is this President. We’ll never erase the pain and trauma of lynching, and to invoke that torture to whitewash your own corruption is disgraceful,” Senator Kamala Harris, a Democratic presidential contender, wrote on Twitter.