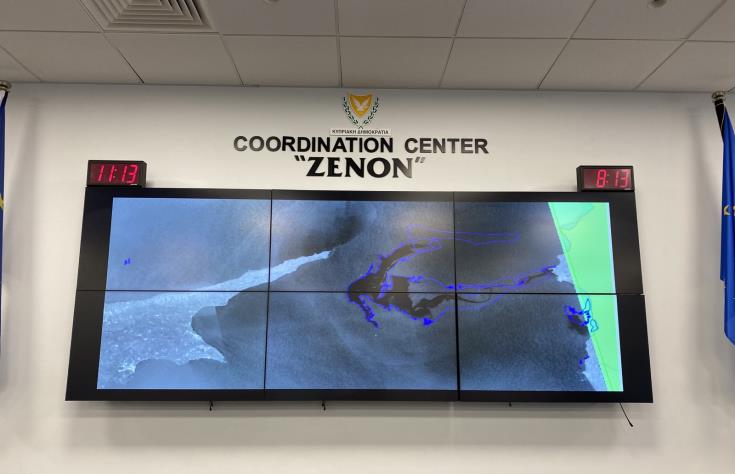 Minister of Agriculture, Natural Resources and the Environment, Costas Kadis, told CNA on Wednesday that the small part of the oil  slick from a Syrian power plant that was detached from its main volume does not cause any concern.

He added that the response unit, comprising officers of the Fisheries Department and the Deputy Ministry of Shipping are in the Joint Rescue Coordination Center.

Kadis said that the main volume of the oil slick is moving towards the coasts of Turkey and Syria, but it seems that small parts of it have been detached.

It seems, he said, that a small part of the oil slick that was detached from its main volume was located by a fishing boat that was sailing about 50 kilometers northeast of Cape Greco.

The Minister noted that a police aircraft and a vessel of the Fisheries Department were sent to  the area, adding that
nothing alarming has been detected so far and that they will continue to cover the wider area northeast of Cape Greco.

Concluding, he reassured the public that the authorities are ready to activate mechanisms to deal with any incident.

Meanwhile, according to a press release by the Department of Fisheries and Marine Research, based on the research so far that covered an area of 900 square nautical miles, there is no presence of oil slick in the sea area in the gulf of Famagusta northeast of Cape Greco.

It adds that the response team is constantly evaluating up-to-date satellite images of the spread of the oil slick received from the CleanSeaNet system of European Maritime Safety Agency.

Director of the Department of Fisheries, Marina Argyrou, told journalists that the competent authorities remain vigilant. The response team, she said, is constantly monitoring and evaluating the situation and they will remain on standby until there is no impact from the oil slick on the wider region, east of the Famagusta coast.

By gavriella
Previous articlePresident outlines proposal for restoration of 1960 Constitution
Next article68-year-old arrested for extortion of 400,000 from 57-year-old