England wows fans, perhaps even its own, with a six-goal eruption 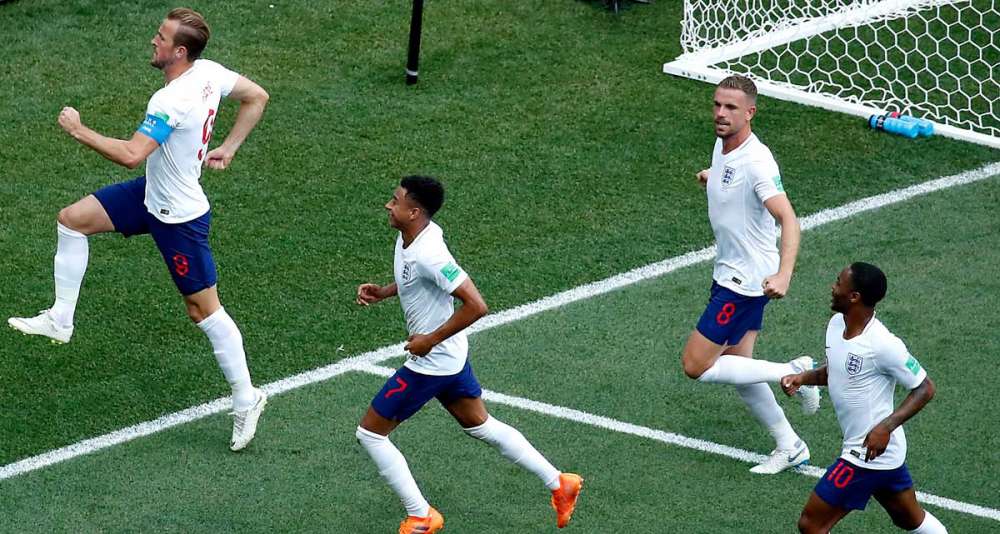 It was Saturday afternoon on the Volga River when Panama’s coach, Hernán Darío Gómez, offered a scary thought: The next day’s World Cup match against England might prove even more lopsided than his team’s 3-0 loss to Belgium in its first game.

A day later, Panama made its manager look like a seer. Behind three goals from captain Harry Kane, England obliterated Panama, 6-1, on a steamy afternoon here, qualifying for the knockout round with a win that may have said more about how poor an opponent the Three Lions faced than about how formidable they might actually be as this tournament rolls on.

And yet, there is not a lot more that anyone could have asked of England through its first two matches in Russia, a 2-1 win over Tunisia when the team was sharp everywhere except in front of the opposing goal and Sunday’s defenestration of Los Canaleros that will fill England with confidence as it confronts the World Cup crucible.

“I know how many people were watching at home on a Sunday afternoon,” England’s coach, Gareth Southgate, said when it was over. “Lovely that we could give them so many goals to enjoy.”

Maybe the most frightening thing for England fans, who have supposedly learned to lower their World Cup expectations after so many disappointments, is actually true. Maybe England is really, really good.

England completed 92 percent of its passes and had 57 percent of the possession, scoring six goals on 12 shots. Maybe England is capable of playing deep in this tournament, and this time making more penalty kicks than Germany or Portugal or whatever other historical nemesis or upstart it faces.

Gómez, who spent most of the day standing in the coach’s box with his arms folded, tried to shed a sliver of positive light on the afternoon. “The second half was 1-1,” he said.

England’s fans brought drums and a horn section that included a tuba and enough songs and chants to last all afternoon. Good thing, because the destruction began early, with defender John Stones getting so free for a header on a corner kick in the eighth minute that he looked more stunned than joyous when the ball sailed into the back of the net. Stones also headed in England’s fourth goal in the 40th minute, knocking in the rebound of a Jaime Penedo save.

Kane netted one of the softer hat tricks in World Cup history. He banged in two first-half penalty kicks and unwittingly got his heel in the way of Ruben Loftus-Cheek’s shot from 20 yards in the 62nd minute. The ball skittered past a helpless Penedo and into the Panama net.

“He said, ‘Sorry, mate,’” Loftus-Cheek said Kane told him after he had possibly stolen his chance at a goal. “That’s the luck of it.”

Kane took a seat on the bench after that score. Midfielder Jessie Lingard worked a nifty give-and-go with Raheem Sterling and rocketed a shot from the left side of the 18-yard line for England’s other score.

Kane is now the leading scorer in the tournament with five goals, though he said there was a long way to go with plenty of other stars in the field, and that was hardly what he cared about most.

“The most important thing is that we’re winning games,” said Kane, a Tottenham striker. “If my goals are helping us win games then that’s a good thing.”

So, what to make of England? The English have qualified for the knockout round from their group, as has undefeated Belgium, the team they will play Thursday in Kaliningrad, Russia. The match will determine only whether England faces Senegal, Colombia or Japan in the round of 16. None of those teams will cause anyone any sleepless nights at the English base camp in Repino, just north of St. Petersburg.

Southgate described his team as “ruthless” for a 35-minute stretch in the first half.

“Just before halftime, the game was done,” he said.

Skeptics might toss darts at the team. For example, only two of England’s six goals came from the run of play Sunday — as if that sort of thing matters, since set pieces play such a large role in big tournaments. In addition, the English defense has not exactly looked impenetrable, letting Tunisia draw even in the first match and allowing two easy chances for Panama early in Sunday’s game.

And in the 78th minute Sunday, 37-year-old Felipe Baloy, a Panama reserve, even slipped into the penalty area to get his foot on the other end of a free kick from 40 yards out to give Panama its first-ever goal at a World Cup.

But no team’s defense looks like a bulwark at this World Cup. That is the nature of the international game, since defense depends so much on teamwork and timing, and national teams only spend about 30 days together in any given year.

Now Southgate has decisions to make. Should he rest his starters and give reserves who have not played a match in several weeks a chance to play against Belgium, or should he keep his foot on the gas and try to win the group? It’s a luxurious choice for any manager to have after two World Cup matches, especially one coaching a team where the tension and the fear of failure is often at a fever pitch from the opening kick.