Energean seeks to supply natural gas to Cyprus from Israel 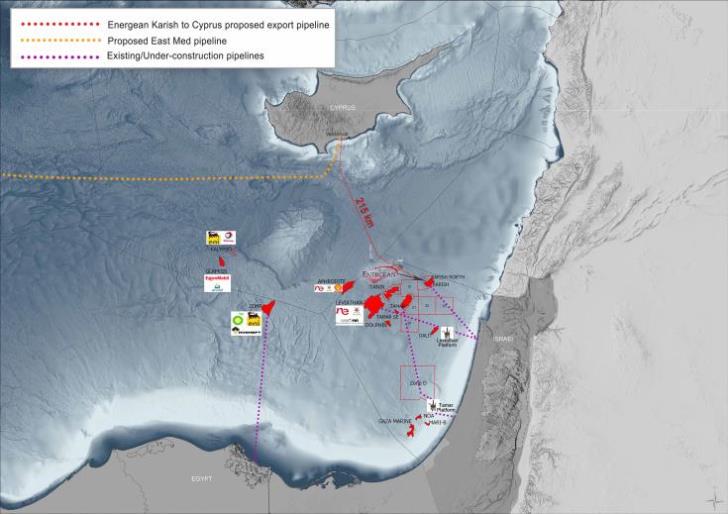 Energean Oil & Gas said on Tuesday its Energean International unit submitted an application to import and supply natural gas to Cyprus starting in 2021.

In its application to Cypriot authorities, it said it sought to supply gas through a pipeline from the Karish block offshore Israel to Vassiliko, Cyprus.

The pipeline would be 215 km long and transport natural gas from the Karish North field, which contains 25 billion cubic metres of discovered recoverable resources.

Total investment, Energean said, will be about $350 million and will be funded by Energean. Provided there are no delays in permitting procedures, the project will allow Cyprus to receive competitively priced natural gas from 2021, it added.

“Execution of the proposal will bring competition to the Cypriot natural gas market, decrease energy costs across the economy and result in enhanced diversity and security of supply,” Energean chief executive Mathios Rigas said in a statement.

“We expect that the Republic of Cyprus will take advantage of the options that the market offers for the benefit of the Cypriot economy and the consumers.”

Energean, a gas producer with a focus on the Eastern Mediterranean, is seeking to diversify its offtake footprint beyond Israel.

Energean noted it has already signed letters of intent with three independent power producers that have been granted a license to construct combined cycle power plants in Cyprus.

It said the project will further strengthen Cyprus’ role in the Eastern Mediterranean, in accordance with a trilateral cooperation agreement between Cyprus, Israel and Greece to transport natural gas to Europe through the East Med Pipeline project.

Rigas told Reuters in July 2018 that the group had sent a proposal to build a gas pipeline to Cyprus to the country.

Tuesday’s announcement relates to a more detailed and formal application to build such a pipeline and register as a gas importer. The Cyprus Energy Ministry had no immediate comment.