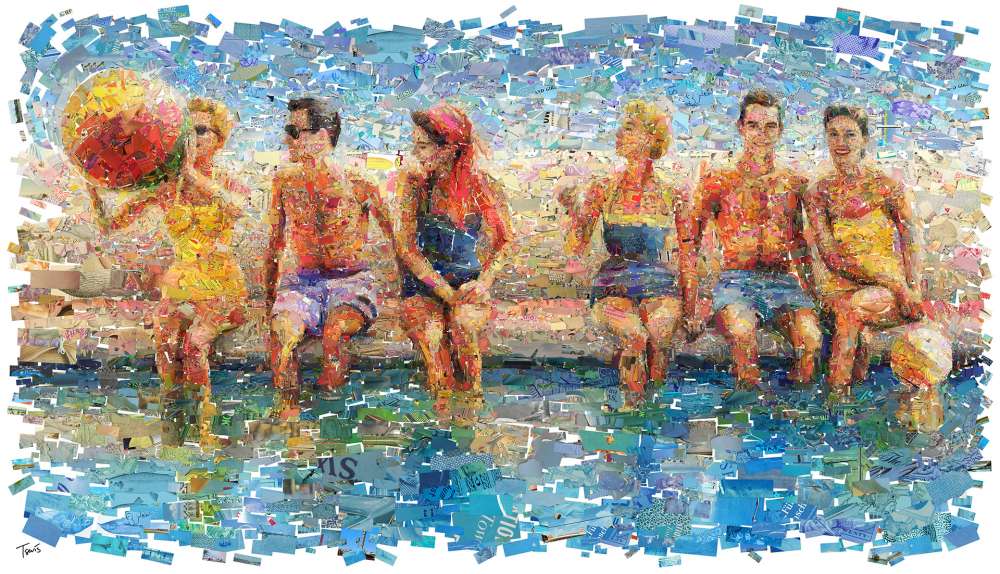 Charis Tsevis is a Greek visual designer and artist whose work is known around the world for many years now. Tsevis became famous for the development and introduction of his own innovative techniques for digital mosaics. International companies (Nike, Toyota, Coca-Cola), media enterprises (Wall Street Journal, Time and CNN) and advertising companies (Leo Burnett Hong Kong, Saatchi & Saatchi Los Angeles and Publicis New York) are among his clients.
This is his first solo exhibition in Cyprus, including a series of mosaics on canvas titled ‘Endless Summer’.
The main theme for all artworks is the everlasting summer. It is an attempt of recording moments from a bright and bittersweet, beautiful and beautified time. Stereotypical scenes with sun, sea and joy. Instantaneous with old popular magazines and advertisements. Innocence and nostalgia, consumption and effort to honor the memory. And in this bright summer comes a series of Aphrodites that identify themselves with various hypostases of the ancient goddess. Sometimes Urania and sometimes Pandemos. They are always multicolored, made out of retro images of nature and intense colors. They are the colours of the summer in Paphos that dominates all over Cyprus. Yellow, blue, gold, green, yellow, white.
The mosaics of Endless Summer praise the carelessness, the beauty, the innocence and the awareness of their loss. In the end they praise the unique youth. The only essential capital of this world that we would like to keep forever as with summer. Without reconciling with its unhindered consumption.

The exhibition will run from the 21st of September to the 21st of October.
The opening party will take place at the pool in Notios restaurant of the Almyra Hotel, on Friday, 21/09, at 19:00.